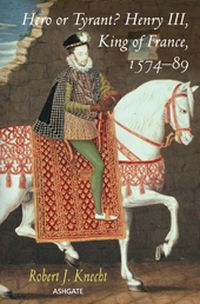 The goals of this book are set out explicitly by its author in the short preface: to bring a fascinating and important figure in French history, and the work of several key French historians, to an English-language readership. By this criteria, this biography of Henry III of France is a great success. The last biography of this pivotal figure in the development of the French monarchy written in English appeared in 1858. But this book is more than a simple biography; it is also the ripened fruit, after decades of study, by one of the leading scholars of the Renaissance monarchy. Robert Knecht provides useful insights not only on Henry the man, but also on the transformations of the institutions of monarchy, court and nobility in the later sixteenth century. The overall message that emerges is that Henry III was clearly a man of intelligence and talent who was overtaken by the tumultuous events of his reign. In spite of his early manifestations of skill in both politics and inter-personal relations, by the time he became king in 1574, he had lost much of his vision and tact. He did not lead by example, notably in his personal life, so was open to criticism from all quarters, from the high nobility to the general population of Paris. Nevertheless, Henry III recast the monarchy, from peripatetic and open, into a highly complex and formal institution, physically and emotionally removed from the nobility and the commons, in an effort to restore the image of the monarch. The best evidence of this legacy is seen in the clear willingness of his successors, Henry IV and the Bourbon kings, to maintain these changes, and indeed to build on them, creating what historians recognise as the Bourbon absolutist monarchy.

The chapters in this book are presented mostly chronologically. The first few cover the prince's childhood, education and development, as younger brother of kings François II and Charles IX. From an early age it was clear that he was stronger, better looking and more actively intelligent than his brothers, encouraged and adored by his mother, Catherine de Medici. It is always so revealing to look at the formative years of this prince, as he plays innocently in the nursery with his future arch-rivals, Henri, Duc de Guise, and Henri, King of Navarre. By chapter three it is evident that the Duc d'Anjou (as Henry is called at this point) is more than just 'the spare'; as younger brother to the King he performs many tasks in his brother's name, and corresponds with him quite directly on matters of state. Foreign correspondents refer to him as the real power in the young Charles IX's government. At age sixteen, he was already named Lieutenant-General of the Kingdom.

Chapter 4 begins to more carefully analyse Henry as a prince, firstly looking at his strategies employed as a military commander to attract an entourage of loyal and talented young nobles, putting forward ideals about a new order in which rewards are given based on merit, not family name (an attack on the dominance of the old grandee houses: Guise, Montmorency, Châtillon). This chapter is well supported with recent secondary literature and printed primary sources such as correspondence and memoirs (in contrast this book as a whole utilises little non-published archival material). There is interesting discussion here, in viewing the marriage proposals to Elizabeth of England from the French side, but also in examining the attempts to use propaganda to 'cover up' Henry's reputation as a blood-thirsty killer following the massacre of St-Bartholomew's Day, in an effort to get him elected as king of Poland in spring 1573.

Chapters 5 and 6, in contrast, are based mostly on the work of others, sometimes uncritically. The details given on Henry's rule in Poland, for example, raise questions about accuracy, appropriate translations of Polish titles, or even minutiae of travel (for example, is it possible to arrive in Austria 'overnight' when escaping from Cracow?). Much of the sources for these chapters are quite out of date. The author seems to be in a bit of a rush to get to Henry the king of France.

This is sharply contrasted with chapters 7 and 8, which start to look closely at Henry's kingship and Henry the man. Here Robert Knecht brings in quite useful discussions by Nicolas Le Roux on the mignons [1], though seeming eager to avoid any recent work on homosexuality, for example the study of Henry III by Katherine Crawford. [2] The historiography presented here, and the much more prevalent use of recent historical scholarship, suggest to this reader that these chapters might have served better as a more straightforwardly academic start to this book as a whole. But these chapters are also useful at this point, in demonstrating the change in Henry once he had become monarch: no longer the sociable and charming primus inter pares, he is now an overt favouritist and craves nothing more than privacy. For the first time the King ignores the advice of his ministers and even his mother, and marries his personal choice (Louise de Lorraine) rather than someone of higher rank (and without close ties to the Guise!) who might better suit the needs of the state.

Chapters 9 to 15 move rather swiftly yet competently through the reign of Henry III, now king of France (and still, technically, Poland). Chapters focus on the growing rivalries between the 'archimignons', his brother and sister, his mother, and with the Catholic League. Chapter 11 is a useful overview of the late Valois court, again presenting a useful synthesis of old and new sources, in English and in French, much of which is drawn from Knecht's recent magisterial volume, The French Renaissance Court. [3] Again, the focus is on Henry's drive to transform Valois kingship into something that is aloof and deserving of respect equally from all courtiers, whether parvenus or grandees.

This of course leads to his clash with those same grandees, and ultimately his downfall, the focus of the final chapter, entitled 'Nemesis'. The showdown with Henri, Duc de Guise, is contrasted with the last-ditch effort to create a new order, a monarch-centred order, by forging an alliance with the Protestant Henri de Navarre. In the end, it is this alliance which survives, posthumously, as Navarre, now Henry IV, carries out much of the reforms planned by Henry III. We are reminded of this in a short, but clear conclusion.

The brevity of this conclusion, and the overall pleasant accessibility of the text, does bring up the question of why this author chose to publish this book with Ashgate, given the reputation of that house for publishing mostly new, sharply academic research, priced well out of the reach of what would be the more logical target audience for this book: an informed general readership. Nevertheless, as stated at the start of this review, the most significant contribution is the bringing together and synthesizing of work done on this topic by both English and French scholars, the translations into English of selections from correspondence and memoirs in French, and making it available to a wider readership. All of this is done by the most capable of scholarly hands, with an intelligence and a brilliance of style increasingly rare in today's academic writing.