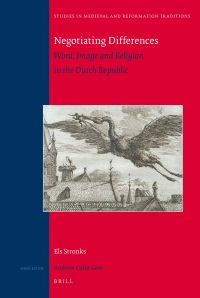 Els Stronks's Negotiating Differences: Word, Image and Religion in the Dutch Republic addresses the use of images in Calvinist, Catholic, and Anabaptist religious literature. Such a cross-denominational approach to studying religious imagery allows for new insights into how the confessional groups formed their identities in relation to image use. As she notes, Stronks works within and strengthens the thesis of Frijhoff and Spies in their book Hard Won Unity. [1] This thesis views the relative peace of the Dutch Republic, despite its considerable diversity of religious practices, as the result of greater interconnections among the different factions of society than was previously recognized.

While working primarily with images, Stronks follows methodologies of literary studies that look both at the content of texts as a system of exchanges among other texts and as a "system produced by groups such as readers, authors, and reviewers" (18). Changes in books from edition to edition and the act of appropriation between texts thus offer the opportunity for historical interpretation.

Organized chronologically and spanning the period from 1600-1795, Negotiating Differences examines the corpus of illustrated devotional literature found in the Dutch Republic as well as some works published in the Southern Netherlands. The corpus includes books that discuss religious imagery as well as those that use such imagery: illustrated Bibles, pictorial bibles, poetry collections, hymnals, and sermons. Stronks identifies two types of images used in these works: illustrations - literal representations of scenes from the Bible - and emblems - complex pictorial rebuses that engage the viewer in interpretation through both image and associated text.

The use or rejection of these different types of images in books, of course, relates to the differing emphasis Catholics and Protestants placed on word and image in religious contexts. While recent studies have examined the effects of image debates on the use of art (especially paintings) in churches [2], Stronks considers how image theory impacted book illustrations. In doing so, she is able to identify some surprising subtleties in the conventions of image use in the different confessions. For instance, illustrated Bibles were rejected by Catholics and Calvinists, but picture Bibles (where images outweighed text) were popular for both, especially for children. Emblems of the type emanating from the Southern Netherlands were embraced by Catholics in the first part of the seventeenth century, became less popular, and then were appropriated and transformed by Calvinists after 1680, at the same time that their use among Northern Catholics withered.

This book is a valuable survey of these materials, especially for non-Dutch scholars for whom access to the works under examination is impeded by geography or language. For anyone studying Dutch religious painting, this book is essential for its cognate understanding of Dutch religious culture, although there is surprisingly little overlap between painting and book illustration, whether in artists or style. (Especially in Reformed contexts, illustrations needed to be seen as equivalent to, not interpretations or expansions of the text. The result is a very consistent, rather dry style.) Stronks offers a useful summary of the attitudes to religious art in Samuel van Hoogstraten's 1678 treatise, Inleyding tot de hooge schoole der schilderkonst (Introduction to the Academy of Painting). Her comparison of secular emblems such as Roemer Visscher's Sinnepoppen to religious emblems is also illuminating.

Despite these strengths, the study leaves one wanting more. Stronks seems to be speaking to an audience that is already well informed about the material and already in agreement about the methodology. For instance, one wonders about the inclusion of the books of Anabaptists, but no other protestants, especially the Lutherans, who tolerated images more than Calvinists. Were their illustrated materials entirely of German origin and thus beyond the scope of the study? And why in many of the illustrations is the young Jesus depicted with wings?

As for the methodology, her analysis of publication data in numbers of editions offers insight into what may have been popular, but Stronks draws her conclusions with surprising confidence based on this data. Certainly, a large number of editions speaks to popularity, but it seems that other mechanisms could be involved, such as promotion of a certain text by the church, which would account for numbers but not guarantee influence. She speaks of constraints felt by authors and publishers on producing certain types of books (emblem books, for instance), but it is not clear what restrictions actually existed. She alludes to the possibility of a kind of internalized restraint in Northern Catholics, on which further consideration would be interesting but not found in the book.

Finally, for a study on word / image, the relation between the two in this book is surprisingly frustrating. The book is amply illustrated, but perhaps in emulation of her emblematic subject, the connection between the text and the images is not always immediately clear. While each image is numbered, she does not always cite the figure number in her analysis, instead relying on the illustration's position in the text. At times, she takes the (to me) unusual expedient of concluding a sentence on an image with a colon after which follows the image itself.

Despite a few weak points, the study offers a valuable overview of a little-studied but important topic that adds to our understanding of the religious culture and interconfessional relations in the Dutch Republic.