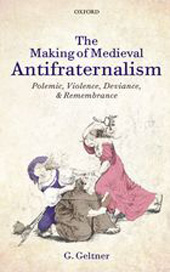 The success of the mendicant orders throughout Europe in the thirteenth and fourteenth centuries has been well studied and established. The friars, mainly Franciscans and Dominicans, but also Carmelites, Augustinians and other smaller groups, did have a profound impact on many areas of the medieval society. However, success does not mean absence of obstacles and problems. The past decades saw an increasing interest in what came to be called antifraternalism. Some essays can be found in Michael F. Cusato and Guy Geltner (eds.), "Defenders and Critics of Franciscan Life: Essays in Honor of John Fleming" (Leiden: Brill, 2009). With this book, Guy Geltner expanded the research and studied not only the oppositions to the friars, but also the antifraternalism generated by the divisions among the friars themselves.

The central question is why: why that antifraternalism? What are the causes of it? Scholars have traditionally mentioned the fact that the new mendicant orders grew too fast, that not all recruits were at the high levels of the order's ideals, that there was a lack of discipline. And in the case of the Franciscans and the Dominicans, there was their increasing involvement in the activities of the hierarchy, not the least of them being the hunting of heretics. While agreeing with those reasons, Geltner argues that "even jointly they fall short of explaining the diversity of contexts and motivations for antimendicant hostility in the thirteenth and fourteenth centuries" (6).

Geltner's book is divided in two parts, as clearly distinct as their titles. The first part, "Words and Deeds: The World against the Friars" presents what the author calls "a detailed panorama of medieval antifraternalism" (13-75). The second part, "Deeds and Words: The Friars against Themselves" shows how the friars themselves contributed to the development of antifraternalism by their "own misconduct and ideology" (79-129).

The first part's first chapter, "Polemic" explores the literary documents attacking the friars. The first source of those attacks is found in the clergy, with the predominant figure of William of Saint Amour and his "De periculis novissimorum temporum." Some with a reactionary ecclesiology were pursuing the termination of those new orders perceived as a danger for the church and a threat to their privileges. But the criticisms expressed by others were well founded and called only for corrections. Another group of opponents to the friars were fiction and poetry writers, people like Jean de Meun in France, Giovanni Boccaccio in Italy, and in England William Langland and especially Geoffrey Chaucer. Their antifraternalism came out of disappointment: for them the friars were hypocrites and unfaithful to their founders. In this case, the opponents were angry because they thought the friars were not living the way they were supposed to: instead, they had been recuperated and assimilated by the church and the society they were supposed to change.

It is then easy to anticipate that the antifraternalism did not remain limited to words. The second chapter, "Violence" moves to action. The friars and their convents became objects of aggression and physical assaults. What do we know about those aggressions, and what were their scale and their scope? In his attempt to answer those questions, Guy Geltner went beyond the traditional sources of historiography like hagiography, martyrology, liturgy and iconography, and reached out to secular sources.

Examining records from civic criminal courts and of bishops' tribunals, the author collected 106 cases of aggression against mendicants across Europe before 1400. The vast majority of those aggressions happened in urban context, which is not surprising since the friars had rapidly developed their presence and their activities in the cities. Only three cases were identified that happened outside cities, on the road: the murder of a Dominican inquisitor on the road between Como and Milan, the despoiling of a Polish Dominican returning to his convent after attending a general chapter, and the rape of a Poor Clare returning to her monastery in Arezzo. (50, n. 22 sends to details on those aggressions in the Appendix I. However, the numbers need to be corrected: 21 should be 20, 76 should be 80, and 94 should be 100.)

The chronological distribution of those aggressions is equally interesting. Geltner identifies two high peak periods: during the first half of the thirteenth century, that is, during the orders' formative years, and during the last quarter of the same century, when the friars had acquired power and influence in the cities. There is also a low peak period during the third quarter of the fourteenth century, that is, in the years of the Black Death, at a time the population was trying to regenerate itself and the mendicants were appreciated for their care of people. After mapping the scale of the aggressions, the author turns to the scope of those aggressions and discovers "a surprising diversity of contexts, goals, and motivations" (55). First, the mendicants were targeted as strangers and even heretics. Then their successes and the privileges they received generated resentment and acts of retaliation, from clergy, monks, and civic authorities. But mendicants were also among the victims of the numerous armed conflicts unfolding throughout Europe, many in urban context in the British Isles, Italy, or Germany.

What responsibility did the mendicants themselves have in the rise of antifraternalism? Reversing the pendulum swing, as he writes, that is the object of the second part of the Geltner's book: "The Friars against Themselves" in deeds and in words. For a good part, the friars contributed to the antifraternalism by their own bad behavior as well as by their ideological discourses. In Chapter 3, the first chapter of the second part, "Deviance" Geltner looks at "the brethren's misbehavior as documented by their orders' administrative accounts." (79). As Geltner recalls, already in 1257, the newly elected general minister of the Friars Minor, Bonaventure, was raising the question in his first encyclical letter: "I was trying to grasp why the splendor of our Order has been somewhat obscured" (80). Trying to see what the mendicants, and not people from the outside, wrote about the misconduct of some among them, that is, friars deviating from what the orders' normative texts prescribe, Geltner focused on the Dominicans for the simple reason that it is there that he found the largest amount of documentation. Studying the records of the Dominican Order between 1251 and 1400, he was able to count 125 cases of misconduct. The major infractions revealed by the Dominican documents were various acts of violence, fraud, sexual misconduct, flagrant insubordination, and apostasy. The culprits would be incarcerated, relocated, or expelled from the Order. Interesting to notice that the Order was always trying to keep the infractions "secret" in order to avoid "scandals". However, unlike the traditional monks living in their monasteries, the mendicants were inserted in urban centers, and consequently their actions were more visible. Finally, another kind of deeds added to the vulnerability of the mendicants: their rapid accession to power and prominence, whether in the secular society or in the church, "undermined their dedication to a life of evangelical poverty and humility" (101).

The fourth and final chapter, "Remembrance" turns to the mendicant identity as expressed in the mendicant written documents. What first appears is what Geltner calls a "mendicant lachrymose history, " borrowing the expression from Jewish historiography. Facing antifraternalism, the friars were certainly aware of their own misbehavior. However, they developed "a self-perception as victimized protagonists in an eschatological struggle" (104). The quarrels at the university of Paris in the 1250s contributed to that perception of victimization, as also did the martyrdom of mendicants outside of Latin Christendom. Finally, there is the remembrance of the death of mendicants during the Black Death or under the Inquisition. Lots of blood shedding and lots of tears became "a major mendicant activity and a staple of mendicant identity" (129). It also contributed to shape the medieval antifraternalism.

Guy Geltner wraps up his impressive and thorough research with a general conclusion on "Antifraternalism, Anticlericalism, and Urban Discontent" (130-137), to which he adds an interesting epilogue, "A New World Twist" (138-139) on the antifraternalism experienced by the Franciscans in Central America during the sixteenth century, not so much from the indigenous populations, but mainly from the Spaniards, because the friars were trying to protect and educate the locals.

At the end of the book, Geltner gratifies the reader with two helpful appendices. The first appendix is the list of the 106 cases of aggressions against mendicants until 1400 used by the author in his research (140-153). The second appendix is a list major offenses and punishments among Dominican friars until 1400 (154-158). Geltner's bibliography (159-181) is thorough: archives, manuscripts, edited sources, and modern studies. And two indices complete his works: Index of Names and Subjects (183-185) and Index of Places (187-188).

Geltner's book is definitely an important book, because it brings new lights and reflections on the phenomenon of antifraternalism (and anticlericalism). Geltner's research is wide and deep, and his presentation is clearly articulated. Hence it reads very well. A little book by the number of pages, but a great book by the contents.