Mitchell B. Merback: Pilgrimage and Pogrom 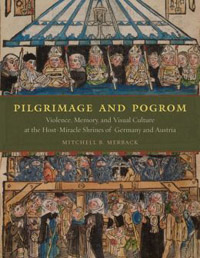 Mitchell B. Merback seeks to explain the perhaps most disturbing development of late medieval pilgrimage piety: the Holy Blood cults connected with alleged host desecrations by Jews. The study concentrates on the visual culture of shrines of this type in the imperial south Germany and Austria between 1300 and 1520. The book is the fruit of a research project extending over ten years.

The discussion is divided into three parts, which are divided into separate chapters, framed by an overall Introduction and Epilogue. The volume is sumptuously illustrated, 20 color plates complementing 122 black-and-white images, maps, and architectural plans. It is indeed a challenge to summarize such a mammoth and - literally and figuratively - weighty tome.

In the Introduction, the author provides definitions of key terms, concepts, and cults employed throughout the book, departing from the traditional method pursued by art historians or religious ethnologists. Visual culture as an analytical concept, he argues, demands an integrative approach to the constellations of spaces and structures, bodies and objects, images and symbols encountered to explain the special conjunction of accusation, violence, legend, and cult (6) and gain genuine insights into the exceedingly differentiated phenomenon of "cultic anti-Judaism" in the history of Jewish-Christian relations. (2)

Part I examines the developments from the very first host-sacrilege myth attributed to Jews in Paris 1290 and its transplantation into German lands. The author carefully traces how its eight principal motifs figured into the cult-formation process at the host-miracle shrines with legends modeled on the Paris affair, the majority occurring in imperial south Germany and Austria. He analyzes the correlations between violent pogroms against Jewish populations and discoveries of host-sacrileges, the complex psychological mechanisms involved linking accusation, miracle, and violence. His reassessment of cause-and-effect assumptions in his case studies demonstrate that "accusations were routinely circulated after the violence supposedly inspired by them." (33)

Part II begins with Merback's description of the foundational events of Pulkau's Holy Blood Church (1339), a host-abuse libel that culminated in the execution of the entire Jewish community in 1338, and places the affair in its regional context. (74) Despite the suspicion and doubt the miracle, discovery, and massacre faced from the outset (some fraudulent miracles were recognized as such by contemporaries), the plan to erect a commemorative shrine was not abandoned, local counts providing the endowment for a chapel. Actual building activities were delayed, and Hussite invasions in the 1420s seem to have hindered its completion. After 1483, the new fief-holder launched a program of renewal, crowned by the new Passion Altarpiece (ca. 1515-20), a Schnitzaltar with painted wings and predella.

The former Church of the Holy Savior in Passau (founded 1479, deconsecrated 1803) was built on the site of one or more buildings in the Jewish area that had been demolished the previous year after the expulsion of the Jews, following the trial and execution of four Jews and one Christian accomplice implicated in a host-abuse conspiracy 1477-79. The church building represents the type claiming to be built on the site of a synagogue or from its materials, evoking ancient typological associations of Ecclesia vs. Synagoga. The three relics associated with the Salvatorkirche represent a specific type emerging in this region at the time: "eucharistic contact relics," from what Merback calls a "mythological mode of production." There was a particularly high demand for these relics between 1470 and 1520, which coincided with an increase in host-abuse and ritual-murder accusations here. The peculiar eucharistic relics of Passau: the "Jew's knife," the "Jew's thorn," and the "Host-sacrilege stone," Merback argues, were presented and understood by the pilgrims to the new church and new cult as surrogate Passion relics. (131)

Part III traces "shifting contours of sanctity" by comparing the "mode of sanctity" obtained at host-miracle shrines with other types of German shrines. (155) Perceptions of sanctity and holiness are reflected in regionally specific patterns of shrine distribution. Merback attributes the continued success of wonderhost pilgrimages, in such a diversified cultic landscape at a time when they had already become anachronistic, to the German tradition of regional communal pilgrimage, as opposed to solitary, long-distance penitential peregrination dominating conventional views of Western pilgrimage. (158-9) This is misleading because pilgrimage was, in fact, very often performed as a rite of associational worship, which always took place at regional holy places. English offers no appropriate term to differentiate, while the German language distinguishes between Pilgerfahrt (long-distance journey) and Wallfahrt (communal peregrinations, often local, typically involving processions). (171) Increasingly, networks of local shrines emerge, becoming regional identification points for communities, especially in the German empire.

The key to accessing the immanence of these host-relics, transformed hosts, and Passion relics was the late medieval belief that salvific powers could be absorbed through seeing. Rituals developed that replaced seeing for touching, by "visual devotion" and "salvific seeing." (159) Indulgences promoting such Schaudevotion increased the demand, (160) as did special relic pilgrimages to great collections such as Nuremberg. At such relic festivals each individual relic would be shown in an elaborate liturgical ceremony from specially erected tribunes to the vast crowds of pilgrims below. (161) Publicity for some of these relic festivals was generated by the publication of special booklets or single-sheet pilgrimage broadsheets, appearing in the last decades of the 15th century and sold as program guides and souvenirs. (161-2)

Part IV returns to the actual spaces of Jewish life and ritual, the notional sites of Jewish sacrilege, and the Christian appropriations and transformations. Fundamental differences existed in the Jewish and Christian conceptions of the sanctity of liturgical space, medieval Christians transferring their own understanding of consecrated ritual space onto the synagogue. The paradoxical perceptions are discernable in the ambivalent treatment of synagogue buildings by late medieval Christians. (218-19) Two kinds of appropriation can be discerned: new edifices built near or directly on the site of a destroyed synagogue, or physical remodeling of existing structures and consecration as Christian sanctuaries.

In Blomberg (Westphalia), a host-crime centered on a local well led to the foundation of the Church of Corpus Christi. Here the desecration was committed by a young local Christian woman accused of witchcraft. (224) In 1460, Alheyt allegedly broke into the parish church in Blomberg after Easter Mass to steal forty-five consecrated hosts, still wrapped in their corporal, from the sacrament house. Alheyt was found and arrested. Under torture she confesses to having dumped all hosts into the old well in the "Blessed Corner" out of fear and guilt. The girl was condemned and led to the pyre. Soon after, the water in the well was credited with healing powers and pilgrims flocked to draw water from it. (260)

The city's overlord, with help of his brother who was bishop of Paderborn, received papal permission to build a chapel in honor of the body of Christ in 1462. In 1468 they founded an Augustinian priory, likewise dedicated to Corpus Christi. The new church, consecrated in 1477, combined the functions of a monastic church, pilgrimage shrine, and dynastic mausoleum - the last remaining evidence of this, the lavish tomb monument built for the founder and his wife, now in the choir. (260-1) The relief depicting the south façade of the church on the founder's tomb indicates the original position of the holy well in the church, and Alheyt's host-sacrilege: releasing the hosts on the corporal into the hexagonal well. Despite Merback's scrutiny of the available literature, he cannot identify the cleric pointing to a large liturgical cross. He is correct in assuming he is one of the Augustinian canons, yet incorrect in claiming that the "display gesture" does not mirror reality. (264) Relic ostentations definitely are documented for Blomberg, but Merback makes no mention of the great collection there. Karl-Ferdinand Beßelmann's study of medieval Westphalian pilgrimage sites mentions two prominent cross relics. [1] Thus we may here solve Merback's puzzle as to the identity of the Augustinian on the tomb of 1510/11. We propose it represents Blomberg's first prior, responsible for the relic collection, including a True Cross relic since before 1480. Perhaps he is pointing at the newly donated Livonia Cross of 1504. These observations complement and support Merback's interpretation of the many associations between Holy Cross / Holy Blood / Holy Sepulchre, and his idea of "poetics of space" much more convincingly than his interpretation of the "crucifix-wielding cleric" being "true religion's defense." (264)

Mitchell B. Merback's Pilgrimage and Pogrom is a profound, captivating, eloquently written study of the material culture of the most disturbing manifestation of late medieval pilgrimage piety.