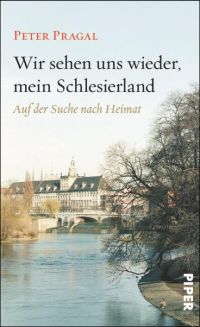 Born in Breslau in 1939 and forced to flee into western Germany in 1944, Peter Pragal became known during the Cold War as the first West German newspaper correspondent to live in East Berlin. Amid reports from East Germany, he always retained fascination for the former German lands beyond the Oder and Neisse. Here in his memoirs, Pragal reflects on the Heimat he knew so briefly in his childhood, joining a diverse cast of prominent expellees who have written similar accounts. Like many of his fellow expellees in the BRD and DDR, he expresses melancholy for the loss of his homeland, ceded by the Allies to Poland as a consequence of Hitler's crimes; but he also accepts the reality of the new border, rejects illusions of return put forth by expellee leaders, and seeks transnational understanding (99).

As in other memoirs, Pragal's initial journey back to his Heimat is important enough to form the departure point for the entire book. In September of 1980 (officially as part of a delegation from a Catholic reporting agency), Pragal visited Polish Wrocław for the first time since his forced departure from German Breslau. To be sure, the political journalist wished to see his trip as something other than Heimweh-Tourismus. However, in reflections typical of other expellee travel accounts, Pragal discovered that "the image I had in my head was an idyll, assembled from my parents' stories, books with pictures from the prewar era, and my own childhood memories"; in contrast to this image he yearned for, he felt alienated from the "totally foreign" world he found in its place (9). Disappointed by signs of decay and East Bloc monotony, Polish inscriptions he could not understand, and communist-nationalist mythologies about the region's eternal Polishness, he saw that he had "arrived in reality" and left convinced that Wrocław had nothing in common with the Breslau he remembered. Upon returning to West Germany, he found that his mother wished to hear nothing about the changes, because "she wanted to preserve unblemished the memory of the Breslau she had known" (14). For other West Germans, the former Eastern Territories were not a subject of interest.

The 1980 visit prompted Pragal to recount his life as an expellee. Peering through picture books, storybooks, and old photos his mother had taken with her in 1944, he jotted idealised memories of an untroubled early childhood in Silesia, followed by bombardment, flight, transit over the Neisse into Görlitz, arrival in the West, and his father's release from POW imprisonment. Under his father's autocratic rule, the family steadily integrated into West Germany's Siegerland, where his father became a doctor and drove a VW. Silesia always loomed large in his parents' memories, however: their bedroom featured a portrait of Breslau's town hall, bookshelves showcased books about Silesia, holidays involved Silesian foods and traditions, and they spoke in the Silesian dialect. Much as his parents reminisced with other Silesians, however, Pragal asserts that they took a realistic approach to integration without any illusions about return. For his part, Pragal attests that, much as he felt the collective expulsion to have been an injustice, even in his youth he refused to accept the territorial revisionism of expellee organisations, or to accept that they spoke for the majority of expellees.

Pragal's relationship to the former Eastern Territories expanded when, thanks to Brandt's Ostpolitik, he became the Süddeutsche Zeitung's DDR correspondent in 1973. "Yearning" overtook him whenever he spied Polish names in place of German ones on street signs pointing to the former Eastern Territories, and he travelled regularly to Frankfurt (Oder) and Görlitz to sit on a bench and gaze out into the neighbouring land (95). Of particular interest here are Pragal's encounters with Umsiedler in the DDR and reflections on how travel to Poland influenced DDR citizens' impressions of their eastern neighbours.

Post-1989 reflections mingle contemporary memories of further travel to Silesia, historical reminiscences about how borders and peoples entered into their present configuration, and political commentary largely opposing rightwing expellee movements that harm trans-border relations and are rejected by most expellees. Pragal also recounts his recent and extensive contacts with contemporary Silesia's Polish inhabitants who have accompanied him on his latest travels. Meanwhile, although expellee leaders insist that the right to the lost Heimat devolves to expellee children and grandchildren, Pragal observes little sense of Silesian identity among his own relatives. For the young, Silesia is part of Poland and of little interest. The thought of living there, even in lucrative jobs, is impossible for them.

A mix of history, memoir, and memory, Pragal's firsthand encounter with the past expresses his contemporary perspective. Raising difficult questions for both the governments involved and the ordinary citizens so profoundly affected, it should be useful as a primary source for any scholar interested in how trans-border actors of the Cold War have grappled with the challenging legacies of border shifts and forced migration in the aftermath of the Second World War.