Saleh Said Agha: The Revolution which toppled the Umayyads. Neither Arab nor Abbasid, Leiden / Boston: Brill 2005 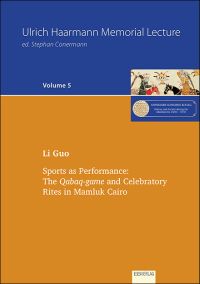 This small essay by Li Guo, Professor and Director of the program in Arabic Language and Culture in the Department of Classiscs, University of Notre Dame, Indiana/USA, examines sports and sporting events in Mamluk Cairo through a case study of one particular game of horseback archery. The essay fills only 28 pages (including literature and picture material). It deals with an up until now largely ignored subject: sports, play and performance, embedded in specific ceremonial rites, for example transition rites (rites de passages) such as the celebration of birth, circumcision of boys and weddings. Starting with an observation the author made while investigating the "jewel of Arabic encyclopedias", al-Nuwayrī's "Nihāyat al-arab fī funūn al-adab", the author states that the 2nd volume, dedicated to "mankind", is conspicuously lacking a chapter on sports and fitness. This is surprising in light of the fact that the Islamic tradition dedicates a great deal of attention to the human body, especially to corporal cleansing and to the control of bodily movements, as well as the relation between body and mind. Li Guo's final conclusion is that the Mamluk courtly culture did have some sports as performance in a very specific masculine Mamluk tradition which derived from military furūsīya-exercises. The game that is discussed in this short study is the qabak-game, nowadays labeled as a Turkish game from the Ottoman-Empire. Among the sources of Li Guo is the description of the court historian of Sultan Baybars (1260-77), Ibn ʿAbd al-Zāhir (d. 1293) who described the celebration of the royal son's circumcision (6ff.) with a featured event called qabaq. The poem seems to reflect a certain tension between al-lahw (amusement) and al-jidd (serious matters). The word qabak (gourd, pumpkin) describes the shape of the target used for mounted archery competition, hence resulting in the name of the game.

The author describes three variants of the target as well as the carrying-out of this chivalry play. Secondly, he describes the qabak-game as carried out at Sultan al-Ashraf Khalīl b. Qalāwūn's "party of the century" and transmitted by his sneaky court poet Ibn Dāniyāl (d. 1310), the author of three shadow plays (11). At the end of the poem, the poet expresses his overwhelming admiration of the splendid stage-scenery that was set up for celebration, without saying why it was erected and why the qabak-game was being singled out. Li Guo informs us that several narrative sources report that the celebration was carried out for the coming of age of the Sultan's brother and future sultan al-Malik al-Nāsir, including a "famous banquet the like of which was unheard of" on Dhū al-hijja 22, 692 (November 23, 1293; 12). A few days later though, there was another, more significant cause for celebration. On Muharram 1, 693 (December 2,1293), the Sultan's pregnant wife was to give birth, and the Sultan gave an order to ready the arms, gears, armor and other supplies for a military parade, banquets and a qabak-game. A lot of money was spent on the preparation. When the news broke that the new-born child was a girl, the mood and atmosphere suddenly changed. The Sultan's face turned black with anger and he uttered blasphemous words against the Sublime Creator (12). The whole celebration was reduced to an almost stingy little event. The qabak-game was only carried out in order to release the anger and frustration of the crowd and as a compensation for their disappointment. All of this is described in dramatic fashion. In later sources such as Ibn Taghribirdī (biography of Khalīl) and especially al-Maqrīzī, we seem to receive more information. Already having spent a lot of money and effort preparing for the event, Khalīl seems to have gotten "cold feet" and in order to avoid public outcry over wasted resources he celebrated the circumcision of two princes (14). According to Ibn Taghribirdī, the Sultan was assassinated shortly after during a hunting trip. Al-Maqrīzī's description shows a highly choreographed game and celebration lasting for several days in front of a great crowd of Cairenes who drank sugar syrup and sang. At the end of the celebration a great storm blew away the royal tent and forced everybody run back to the Citadel for cover. It is to this event that the Citadel owes its title, Al-Ashrafīya (16). Al-Maqrīzī's narrative connects the dots, twists and turns of the plot.

The following chapter gives an overview of the sporting events with the focus on the qabak. This game was incorporated into the court ceremonial rites. The maydān, the public square at the foot of the Citadel, came to serve as a major sporting venue in Mamluk Cairo. It started out as a royal stable built by Sultan Baybars in 666/1267 (17). The qabaq game was incorporated into the elaborate furūsīya-program to represent an important part of the Baybarsian military might and knightly machismo-celebration as well as to disperse the "singing girls" for a change (18). Referring to Ibn Dāniyāl's shadow play of a same-sex love story, finally leading to betting in animal fights, this leads to the question of the functions performed by sports and sporting events in Mamluk Cairo (21).

Li Guo comes to the conclusion that military readiness was the primary motivation for Mamluk furūsīya exercises, but also that sports and sporting events were staged in peacetime for various purposes. The distinct Mamluk masculine character was achieved by abandoning pagan celebratory elements of music, dance, carnival, and adopting war-inspired sports instead. Turning into state-sponsored sports, these qabak-games as well as other furūsīya-related exercises gained legitimate status as a showcase of power, prestige, and non-criminalized production of pleasure, being considered as permitted "play" (la'b) in the Mamluk "empire of theatre" (22). They did not cause controversial debates and fatwā-on-demand legal circles, as did far more controversial things like music, dance, and the performing arts of that time. This small inquiry of Li Guo represents an insightful look into the leisure activities of the Mamluk period. It is also another stone along the path to acquiring more knowledge about the possibilities and varieties of athletic entertainment.