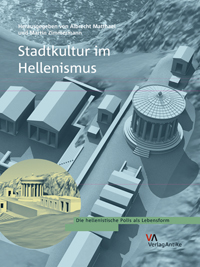 This solid (a quarto of 277 pages) and densely written volume is comprised of twelve articles in German and one in English. All texts have footnotes, and most are followed by lists of bibliography, except those by Dirk Steuernagel, Lars Heinze, Sara Saba, and Winfried Held. The lengths range from 43 to 10 pages. The quality of the print and about a hundred B&W images (photographs, maps, charts, and drawings) is superb. The book ends with general indexes of (i) names of places, (ii) names of people, deities, heroes, (iii) names of locations of veneration, and (iv) technical terms.

Like most editors, Martin Zimmermann spent his introduction (7-8) explaining the rationale for including articles that cover a wide range of topics. He noted that from its inception in 2009, Die hellenistische Polis als Lebensform has aimed to examine the development and interaction of the "political, religious, and cultural institutions" of Hellenistic cities - in comparison with similar institutions during other historical periods and from premises of different fields of historical research.

Declaring their overall theme as inclusion versus exclusion and understanding "culture" in general terms has allowed the editors to put together articles dealing with topics as diverse as temene in Cnidus (Wolfgang Ehrhardt), local variations of grants of asylia in relations between cities with each other and with monarchies (Péter Kató), the role of thiasoi in "public" and "private" religious cults (Marietta Horster), democracy and demography in Priene (Daniel Kah), and "private" and "public" aspects of Hellenistic baths (Monika Trümper). The declared general approach, however, fails to explain why the book is limited to material from Asia Minor, while three chapters (Daniel Kah, Frank Rumscheid, and Ulrich Mania), or one-fifth of the entire book, focus on Priene.

The limited length of this review requires me to adopt a selective, and inevitably subjective, approach, concentrating on three articles that directly examine individual social, legal, and political status in Hellenistic poleis.

Sara Saba ("Isopoliteia in the Hellenistic Polis") used her republication, translation, and interpretation of the treaty of isopoliteia between Miletus and Seleucea-Tralles (Milet I 3, 143) as a "test case for the study of isopolity", with the aim of initiating a reconsideration of grants of isopoliteia in general. She rendered its meaning as "potential citizenship", and focused on the political and economic considerations behind the establishment of this isopoliteia. If isopoliteia remained "potential", how could it promote a "stronger, diplomatic relationship"? And if isopoliteia implied equal citizenship (e.g., Szanto, Das Griechische Bürgerrecht, 72), what did this have to do with diplomatic relationships between cities?

Saba noted that the treaty was accompanied by "other clauses that could enhance economic cooperation". One needs to explain why many grants of (iso-)politeia included the economic privileges that should have belonged to citizens, like the right of enktesis (e.g., I.Priene2 15; IG XII suppl. 245; SEG 29, 1149) or the right of isoteleia (e.g., I.Priene2 5; I.Kalchedon 1; IG XII suppl. 245). Could there be regional and / or chronological variations? Athenian grants of politeia did not mention the right of enktesis, even as late as the second century B.C. Could there be variations depending on whether these were collective or individual grants? The latter grants were awarded alongside asylia on the import and export of a personal estate (I.Erythrai 8; I.Priene2 15). Both the reason for establishing isopoliteia between Miletus and Seleucea-Tralles and the way in which this text can help us to better understand such grants need further consideration.

Linda-Marie Günther's very interesting contribution "Nothoi und nothai - eine Randgruppe in der hellenistischen Polis? Zur Auswertung der einschlägigen Inschriften Milets" focused on the place of bastardy in Hellenistic poleis. Günther accepted the usual definition of "bastards" as children of non-legally-acknowledged birth, and outlined the ongoing debates on (1) the origins and meaning of the status of bastards in Miletus, (2) whether Milesian bastardy, of which we know from inscriptions, was different from bastardy in classical and Hellenistic Athens, which is also documented in many literary texts, and (3) whether there was a change in the status of bastards from the classical to the Hellenistic period.

Her prosopographical analysis of Milesian grants of politeia focused on male and female bastard children born to aliens, or to Milesian "citizens", or in mixed marriages. Günther correctly observed that politeia was granted regardless of the recipient's legal status: in legal terms, bastards were foreigners, unless such grants were specifically conditioned by the recipient being a polites in another polis, like sympolity between Pidasa and Miletus (Milet I 3, 149); however, Günther did not distinguish between the status of politai "by nature" (Milet I 3, 149.10-12) and "by decree". Her obvious conclusion was that bastards could not be counted as a separate Randgruppe in legal terms.

Daniel Kah's "Demokratie in der Kleinstadt. Überlegungen zu Demographie und Partizipation am Beispiel des hellenistischen Priene" raised several important questions pertaining to political representation by different social groups, the extent of popular political participation, and the survival, or development, of democracy in Hellenistic cities. After a detailed overview of the ongoing debate about the political domination by Hellenistic city elites - the Honoratiorenregime or -verwaltung - Kah attempted to establish the size of Priene's citizen community on the basis of archaeological evidence, without ever giving a definition of "citizen". He effectively blurred the line between "inhabitants" and "citizens" when he tried to calculate the number of citizens by measuring the extent and population density of the chora and interpreting evidence about (the sizes and numbers of) houses and other buildings in Priene. The validity of his effort to measure the number of citizens proportionally to the size of the city council is similarly questionable. Claimed parallels with the social and administrative situation in late classical Athens do not help, because the size of the cities and, accordingly, the number of administrative positions were vastly different. Kah's other sources were honorific decrees and evidence about specific offices, like the eponymous stephanephoria. His conclusion that local elites did not dominate the politics and administration of Hellenistic cities (this changed in the imperial period, according to Kah) is not new: see, e.g., Christian Habicht, in Stadtbild und Bürgerbild im Hellenismus, ed. Michael Wörrle and Paul Zanker (1995). Kah's assertion that the political and administrative system of the Hellenistic Priene was stable because the small size of the citizen body (about one thousand people, in his estimation) ensured equal access and participation for all citizens makes one wonder how this number was calculated, and whether political regimes of Hellenistic cities depended directly on the number of citizens.

Political importance was not the same as social prominence in Hellenistic cities. Although members of city elites might have played a more visible role in local life, they had no special status in legal terms during Hellenistic or even imperial times. This makes a stark contrast with the Latin-speaking cities of the western Mediterranean, and disqualifies using such concepts as honestiores for the cities of the Greek East: Dmitriev, City Government, 170-172. Prestigious - and often very costly but politically unimportant - positions in Hellenistic cities could be occupied by those who had no political rights, like female and underage members of elite families, or distinguished aliens, or deities: ibid., 45-56, 157-188. These positions embraced eponymous offices, including the eponymous stephanephoria in Priene, and had nothing to do with citizenship or (the presence or lack of) democracy. Any analysis of "city offices" in general, without examining their nature and the status of their holders, misses the complexity of social fabric and political reality of Hellenistic cities.

I wondered about the fate of this series when commenting on the diverse assortment of contributions to its first volume (JHS 130, 2010, 266-267). While the range of articles in the fourth volume remains similarly wide and not all conclusions can be taken for granted, it has succeeded as a reflection of the diversity and richness of city life during the Hellenistic period.