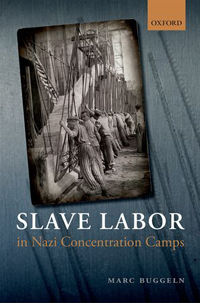 Marc Buggeln's Arbeit und Gewalt (2009), a study of the Neuengamme satellite camp system, has established itself as an important contribution to the burgeoning historiography of the National Socialist concentration camps. A weighty monograph coming in at 750 pages of painstaking empirical research and richly textured analysis, it was fêted by one distinguished reviewer (Jane Caplan) as the "gold standard" for the historian's craft. At 330 pages, the English-language edition under review here, Slave Labor in Nazi Concentration Camps, is greatly abridged and inescapably sacrifices some of this depth. Its appearance is nevertheless highly welcome and promises to make important scholarship available to a wider audience.

The book opens with a lengthy overview of the camp system (translated from another of the author's publications) which sustains its rather misleading titular claim to encompass the Nazi "camps", but is not entirely necessary for the ensuing close study of Neuengamme. Indeed, not until the third chapter does the translation really begin to showcase the immaculate source work and thick analysis which made Arbeit und Gewalt so compelling. Neuengamme's eighty-five satellite camps (one as far-flung as the small British Channel Island of Alderney) have left a relatively rich historical record - prisoner testimony, company accounts, personnel records, judicial investigations and private correspondence - which is used skilfully to underpin a rigorous but sensitive comparative analysis of these sites and their relationship to the Neuengamme Hauptlager.

Buggeln's analysis yields important correctives to received wisdom on mortality patterns in the camps. Whereas research on the Mauthausen complex has found that death rates in satellite camps devoted to construction work was around six times higher than in those primarily focussed on production (manufacturing), he finds no such relationship at Neuengamme. Far more decisive was the stage of the war, in whose final five months mortality rates were actually higher in production than construction camps. Even more striking is the extent to which gender, rather than labour type or SS racial classification, determined survival prospects. Mortality rates for women were far lower than for men, despite the fact that over 60% of female inmates in the Neuengamme satellite camps were classified as Jewish. Jewish women were appointed to all inmate functionary positions in these camps. Male Jewish mortality rates, in stark contrast, were significantly higher than for other groups, and the chances of securing functionary positions remote.

Other aspects of the analysis also counsel against the overwhelming stress on ideological causation in the recent historiography of Nazi persecution. In many Neuengamme satellite camps, inmates from Western Europe endured higher mortality than those from Eastern Europe, including the Soviet Union. Buggeln perhaps skates a little close to stereotyping in ascribing this to the latter's hardy constitutions and greater experience of privation at home (145) but is on stronger ground stressing the role of prior occupation to survival in the camps. He also explores the important refinement to Nazi genocidal policy from April 1944 when large numbers of Jewish prisoners were brought back into Germany for labour even as the occupation of Hungary paved the way for the unprecedentedly intense extermination of the Hungarian Jewish population. This reluctant suspension by the SS of its "homicidal credo" (279) was merely tactical, but points the way to an enhanced understanding of the impact of situation in its policies of murder.

Although the English translation dispenses with the sophisticated Pierre Bourdieu-inspired theorizing which characterized Arbeit und Gewalt, Buggeln's analysis of the Neuengamme perpetrators generally favours functionalist types of explanation. He stresses the contributions of perpetrator role and spatial situation to episodes of violence, alongside the toxic leadership provided to sundry "ethnic Germans" and seconded Wehrmacht personnel in the camps by a small group of bright-eyed SS fanatics socialized in the pre-war camp system. These are salutary insights but it would have been fruitful to see these guards examined, like the prisoners, as gendered beings: Buggeln has very little to say about the contribution of masculine ideals to the conduct and cohesion (or otherwise) of the perpetrators.

While the quantitative analyses in Slave Labor in Nazi Camps are generally impressive, these too are marred by occasional infelicities. At one point (101), for example, Buggeln states that a monthly mortality rate of 10% implies that all prisoners would have been dead in 10 months: they may well have been in practice, but not through this consistent rate of attrition. In fact, over 3,000 would still be alive. To be sure, this is not fundamental to the argument but does risk needlessly undermining the authority of his important data mining (see 111 for another example). There are also places where the abridgement for the English-language edition has led to pugnacious interventions into wider historiographical controversies without the same detailed empirical foundation as Arbeit und Gewalt (see especially chapter ten and the Volksgemeinschaft debate). Finally, one might also quibble with the (titular) characterization of concentration camp prisoners as "slaves" - the classic slaveholder needed to keep his slaves alive in order to generate a return on the resources expended in acquiring them. For the SS, in contrast, as Buggeln demonstrates so chillingly, the death of a concentration camp inmate was greeted with indifference (at most) until quite late in the war. All in all, this volume is a very fine and generally skilfully-adapted "taster" of Buggeln's Neuengamme project, particularly recommended for Anglo-American students, but to experience its full nuance and sophistication, the historian is advised to seek out the original German.