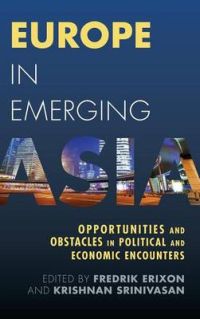 In this volume, the editors - Krishnan Srinivasan, a former Indian Foreign Secretary and Deputy Secretary-General of the Commonwealth and Fredrik Erixon, Director of the European Centre for International Political Economy - set out to provide a realistic overview of the relationship between Europe and emerging Asia. With contributions from the likes of politicians, diplomats and academics specialising in the regions and their interaction they hope to have compiled a study "free from doctrinal faith and the jargon from upbeat summit declarations" (1). It is a grand ambition to have within the confines of three hundred pages, considering the vast scale of the subject matter and its constant development - e.g. at the time of publication the TPP discussed below was yet to be signed - but they ultimately succeed.

Srinivasan's own contribution opens the main body of the book, examining Europe's relationship with India. It is clear that thus far, the author regards this as a tale of missed opportunities. Since independence and the subsequent establishment of diplomatic relations with the EEC in 1962 it has been - to use the chapter's subtitle - a "dialogue without intimacy" (19). Of course the other side of this is the potential for future improvement and Srinivasan is clear in his prescriptions. Europe must realise the world is no longer Eurocentric, whilst at the same time recognising the tremendous value her technological advantages give her in any coming order of things. The EU's "perceived tilt towards China and Pakistan" (19) is not helpful, but India for her part should "avoid obsession" (43) on the matter; similarly oversensitivity to European criticisms of Indian democracy and human rights should not be allowed to trump the country's "brand recognition in Europe" (42). After all - as Srinivasan notes in a particularly striking section on "Cultural Patterns" - Europeans have historically often gone so far as to view India as "the purveyor of unpolluted wisdom" (31) and the originator of western civilisation. Erixon by contrast in his general survey of trade relations and political cooperation across the region argues that a twenty year golden period has now come to an end. This pessimistic view is borne out by a decline in the growth rate of emerging Asia-Europe trade. Institutional reform is required and like Srinivasan's views on Eurocentricity, Erixon is emphatic in his belief that any kind of deference to European values or ideals from the more powerful Asian economies - even with their own problems - is now dead. Indeed - even if his final conclusions aren't entirely apocalyptic - he considers current EU-Asia trade talk activity to be "superficial" (166).

In a broader survey of south Asia, Iftekhar Ahmed Chowdhury begins by expanding upon the theme of historical links between the region and Europe from Alexander to Clive, before examining in turn current European relations with Pakistan, Sri Lanka, Nepal, Bhutan and Bangladesh. Britain's post-Imperial role as the initiating link between these states and the Community is very clear here, from the Pakistani diaspora to the introduction of tea to Ceylon via the conquering of Mount Everest and the recruitment of the Gurkhas. Like Srinivasan the author remains cautious, highlighting similar issues and possible impediments to progress such as European "political interventions" (61) over the likes of the Sri Lankan Civil War and what might be termed the Union's lack of gravitas in the eyes of regional actors when contrasted with the traditional nation state. The former issue is also remarked upon by Evi Fitriani in the context of Southeast Asia, and Srinivasan's posited lack of Indian-European intimacy seems to have applied just as much to ASEAN-EU relations between the 1970s and the 1990s (74). Within ASEAN, as Kriengsak Chareonwongsak notes, Thailand provides yet another pertinent and specific example of an economically unhelpful clash of values. South Korea, provides an arguably bizarre contrast to much of the above. Partitioned and still technically at war, she is rather incredibly, in the words of Jin Park "a pioneering democracy" (108). And whilst in the absolutely central field of technology research and development "cooperation with Europe has so far been mostly bilateral" (124), the author's outlook is seemingly very positive.

In Agnieszka Kuszewska and Hari Vasudevan's chapters the relationship between emerging Asia and Europe's own developing central and eastern regions is examined. For Vasudevan a resurgent Russia means an obvious and substantial obstacle to Europe's eastward expansion and its cultivation of Asian ties. The alternative, he notes, of "a possible 'Eurasian Community' have been firmly promoted by Vladimir Putin" (252). Kuszewska argues that "the post-Cold War era provided an opportunity for the Central European states, drawing upon their Soviet era ties, to initiate a new model of cooperation with China, India and other Asian nations" (218). This plus a lack of colonial baggage should have seen them at the forefront of any engagement, but she regards this as having been squandered and only partially - though certainly symbolically - remedied by Donald Tusk's assumption of the EU Council Presidency.

Finally what might be seen as the rise, fall and residue of superpowers in the context of European-Asian relations is extensively detailed in chapters by James Mayall on Britain's role, Philip Levy on America's external perspective and by Zhang Xiaotong and Wang Yiwei on Chinese-European relations. Parallels are evident but contrasts also abound. Britain's territorial legacy in the region is unique, and as Mayall points out this has meant a concerted effort - with varying levels of success - to turn "imperial liabilities into post-colonial assets" (133). America - with her own relatively recent quasi-imperialist Asian entanglements - has nonetheless embraced geographical realities and sought to 'pivot' eastwards, embarking upon the creation of the Trans-Pacific Partnership (TPP) which also forms a template for future global trade agreements, most notably the proposed Transatlantic Trade and Investment Partnership (TTIP) with the European Union. By contrast Wang Yiwei is very sceptical of the China-EU Comprehensive Strategic Partnership initiated in 2003. He sees this as down to both the external presence of the United States and the asymmetrical nature of the relationship. Zhang Xiaotong is perhaps more optimistic, urging improvement through a "long-term historical view" (185), though warning of China's suspicion of both the 'pivot' and TTIP.

This is a very valuable book and its claim that it makes a unique contribution to the field is justified. Moreover it manages to be engaging on a number of levels and will be useful in academic and professional environments as well as to the general reader. There are of course occasionally times in the volume when one or other of the contributors - necessarily a member of 'the establishment' - delivers a predictable 'establishment' conclusion. Likewise as an historian I might have been tempted to group the chapters differently under a number of subheadings and to excise certain examples of 'IR speak' that cropped up in the text, but these are personal preferences rather than criticisms. The overall impression is of an elegant and unified work - despite the diversity of the contributions - thanks in large part to the clear sightedness of the two editors.