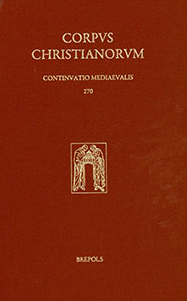 Steven Vanderputten and Diane J. Reilly's edited volume of Gerard of Cambrai's 'episcopal corpus,' as they have called it, represents a new edition of Gerard's Acta Synodi alongside "texts either penned by Gerard or attributed to him, or to his patronage, within his lifetime" (v). Gerard I (c. 980-1051) served as bishop in the diocese of Arras-Cambrai, situated on the frontier between East Francia and West Francia in the Southern Low Countries. The editors have gathered materials related to the bishop and to his court during his reign in order to show "the bishop's struggle to maintain political and spiritual control over his diocese, his desire to foster orthodoxy, and his fluctuating relationship with both local and international leaders" (xxii). While none of the texts in this edition are newly edited, the editors hope to present here the "best witnesses" of the texts for scholarly consideration (xxii).

Vanderputten and Reilly's volume includes the Acta synodi Atrebatensis, the Vita Autberti, the Vita tertia Gaugerici, and various others texts and letters related to Gerard's episcopal court. The two great works associated with Gerard are the Gesta episcoporum Cameracensium (edited by L. Bethmann in 1846 and not reedited by Vanderputten and Reilly) and the Acta Synodi Atrebatensis, the "sole record of one of the earliest known outbreaks of heresy in the high Middle Ages" and a "lengthy and coherent disquisition on ecclesiastical orthodoxy from one of the more powerful clerics in the period" (1). The Acta Synodi exist in one manuscript. Vanderputten and Reilly consider this text to be more than a record of a 1025 trial against heretics. They argue that the length of the work, and Gerard's long interpretations of orthodox teachings, renders the Acta Synodi as a "theological tract designed for broader circulation" (5).

The Life of Autbert (d. 674/675) represents the "first surviving witness to [Gerard's] concerns about orthodoxy and collaboration between episcopal and royal power" (79). At Gerard's request, a cleric named Fulbert compiled the Vita Autberti (sometime between 1015 and 1023), possibly in conjunction to the translation of Autbert's relics by Gerard in 1015. The editors argue that the Vita focuses on qualities that would be admired by a reforming bishop, and they further suggest that the ideology presented within this text is consistent to that found in the other texts that they have edited for this volume (82). Their edition of the Vita Autberti reflects a reading of the earliest copies of the Vita (as determined by Charles Mériaux); it is not a comprehensive critical edition. The base manuscript - Brussels, BR II 992, f. 108r-121f - was likely composed sometime between 1023 and 1051, derived from the now-lost autograph (87).

Gerard commissioned the compilation of the Vita tertia Gaugerici sometime after 1023. This third Life of St Géry, fourth bishop of Cambrai (584/590-c. 624), was adapted from two libelli, one short and one long, devoted to the saint (131). Although there remains some degree of debate, a majority of scholars attribute the Gesta episcoporum Cameracensium and the Vita to the same author (132). As such, Vanderputten and Reilly chose to place the Vita tertia within their edition because they argue that the author's redaction of the Vita prima and the Vita secunda fashion the 'episcopal programme' of the saint (following Bruno Judic) into one that "reflect[s] Gerard's personal understanding of the episcopal office" (137). As with the other texts edited for this collection, Vanderputten and Reilly selected this work to present a particular image of Gerard of Cambrai as a learned, reforming bishop of the eleventh century. The Life exists in three manuscripts - Cambrai , Médiathèque 865; Cambrai, Médiathèque 864; and Brussels, BR 9070-9077 - with the two manuscripts from Cambrai representing the oldest, and best, witnesses for this Life (142-143).

Erik Van Mingroot published the definitive critical edition of Gerard's diplomatic corpus in 2005 (Chartes des évêques de Cambrai et d'Arras). In the bibliography to this edition, Van Mingroot noted the existence of twelve miscellaneous texts: nine letters, two conventions, and one decree (191). Vanderputten and Reilly have gathered and edited these texts in the fourth section of their edition of works related to Gerard of Cambrai. The texts range in date within the 1020s and 1030s, with a final memorandum sent from Gerard to Emperor Henry III in 1046 (Text XIII in the collection). Despite some scholarly debate, Vanderputten and Reilly attribute all thirteen texts to Gerard. All have been preserved as parts of larger textual entities, despite the fact that each would have traveled separately as originals (196). Among these texts, I-V, VII-X, and XII-XIII are preserved only as components of the Gesta episcoporum Cameracensium (196).

The presentation of the texts in this edition meet the rigorous standards set by the Corpus Christianorum Continuatio Mediaevalis series, and this rigor provides a significant benefit to scholars reading this volume in place of previous editions (when available). Vanderputten and Reilly have chosen to maintain the original orthography of their manuscripts, and this choice both provides an interesting glimpse into eleventh-century Latin and yet remains quite readable. Each of the texts edited within the volume are accompanied by an apparatus biblicus, an apparatus fontium, and an apparatus criticus as is standard. For the miscellaneous texts edited in the volume (principally letters with several other genres), a textus traditus provides additional manuscript information.

Vanderputten and Reilly have provided four indices in addition to their Latin editions of the four groups of texts that they have compiled. These indices - an Index locorum sacrae scripturae, an Index fontium, an Index locorum, and an Index nominum - are well presented and clear in their structure. Each index provides a simple reference to the parts of the edition, and this enables rapid searching for sources, names, and places.

In terms of the overall significance of the work, two things must be discussed. If we consider the work as a contribution to edited primary sources of the Middle Ages, Vanderputten and Reilly have done a considerable service in creating a new edition of important eleventh-century texts. Not only have they returned to the original manuscript sources, they have updated outdated editions of some of these texts, and, so, they have brought contemporary conventions in textual editing to this corpus. This is a notable achievement in and of itself. On the other hand, Vanderputten and Reilly have used the selected texts, and their introductions to these texts, as a vehicle to make a compelling argument for who Gerard of Cambrai was and to what extent Gerard and his associates worked towards the reformation of the episcopacy and the eradication of heresy within the Southern Low Countries. Since Gerard provides a good example of a reforming bishop during a major period of medieval ecclesiastical reform, and since Gerard's work has been shown to influence the emerging Cistercian Order, these texts are valuable to a range of historians of the Middle Ages.