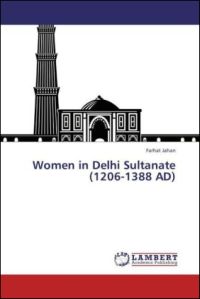 Farhat Jahan's study, which is based on her dissertation submitted to the Aligarh Muslim University, Aligarh, India, is about women, their role in the society of the Delhi Sultanate and the way they are depicted in the contemporary sources. Jahan argument is twofold: Firstly, she sees women's work in the household as the prime factor for ensuring the "material and symbolic reproduction of the society" (170). Secondly, acting on the assumption that concrete boundaries between the private and the public spheres in the Delhi Sultanate's society did not exist, she believes that women played an extremely important part in the public spheres as well. Ultimately, the study strives to illustrate "the diverse nature of work performed by women in public and private life" (173).

Based on a broad variety of sources ranging from chronicles to poetry, Sufi literature and paintings, Jahan's objective is to bring women "to the center of historical process" and to study the socio-political history of the Delhi Sultanate from women's perspective (11-12).

The study consists of an introduction (10-19), five main chapters, and a conclusion.

Chapter I deals with women in politics and consists of two sub-chapters. Chapter IA (20-46) examines how women participated in politics, drawing strongly on the sample case of Sultan Raziya, the daughter of the Sultanate's founder Shams al-Din Iltutmish and the only female ruler in Delhi. Jahan discusses Raziya's troubled enthronement and heir reign, focusing on administrative matters, Raziya's dealings with the elites, her conflicts with the immigrant Turkic emirs from Transoxania, and the currency system under her reign. The chapter is mainly based on chronicles, focusing particularly on Minhaj al-Din Juzjani's Tabaqat-i Nasiri, a chronicle from Delhi's thirteenth-century courtly sphere.

Chapter IB (47-66) deals with the royal harem and the involvement of its female members in imperial and court politics. Focusing on the more distinguished women of the harem, Jahan discusses their relations to the sultan, the elites, each other, and "the people at large" (16). She examines to what extent these women enjoyed privileged positions and if they were able to affect political decisions. The chapter mainly relies on Minhaj al-Din Juzjani's Tabaqat-i Nasiri as well.

Chapter II (67-89) deals with women in Indian paintings, utilizing a wide range of sources that contain depictions of women. Jahan believes these paintings to be suitable for reconstructing the history of people and the material culture of their times (67), maintaining that they are no less meaningful than contemporary chronicles since they "provide the information in an illustrated form" (17). The chapter deals with women's social status and contemporary customs and habits with regard to women. The chapter also offers a glimpse into Indo-Persian composite culture.

Chapter III (90-117) deals with women and religion. In this section, Jahan investigates the opportunities for women in the religious realm. She attempts to explore to what extent a "dignity of holiness" (90) and a type of spiritual status could be gained by women given the patriarchal set up of "medieval" northern Indian societies, as well as how much leeway women could have in the predominant religions of the region, Islam and Hinduism. Jahan focuses on women as (famous) Sufis and as mothers of (famous) Sufis. The chapter mainly relies on Sufi literature.

Chapter IV (118-42) looks at women as part of the labor market. Jahan examines the various occupations where women allegedly played a role. Large parts deal with professions of "entertainment" (118), women as dancers and singers, women as slaves, and women as concubines. Obviously, the available source material predetermines this focus. This includes chronicles, Ibn Battuta's travelogue, and Sufi literature. Additionally, Jahan estimates the involvement of common women in the labor market, which revolved around domestic jobs such as raising children, carrying water, cooking food, serving meals, tending cattle, spinning cloth, and the like.

Chapter V (143-69) attempts to examine social institutions such as marriage, divorce, and widowhood, as well as costumes, styles of clothing, ornaments, and cosmetics. Jahan also looks at cultural traditions that were to the detriment of women, such as purda (female seclusion), sati (self-immolation of widows), and jauhar (mass self-immolation of women to avoid capture, enslavement, or rape). In this respect, Jahan also discusses methods in which men acted as custodians of the alleged honor and chastity of women.

The conclusion (170-74) summarizes the study's results. The study concludes that in the first two centuries of the Delhi Sultanate, women "[...] played quite important roles freely and equally in all walks of life and contributed to the continuation and development of culture" (170). They were influential as members of the harem and "[...] were in no way subordinate in status to men in controlling the administrative machinery" (66). With regard to the religious sphere, Jahan concludes that Sufism was by no means an exclusive arena for men to which women were denied access (115), but was instead open to both genders.

According to Jahan, women excelled in the field of performing art (174) and actively participated in many areas of the labor market. Women's work in the household primarily ensured the "material and symbolic reproduction of the society" (170). Acting on her assumption that concrete boundaries between the private and the public spheres did not exist (173), Jahan concludes that women played an extremely important part in the public spheres as well.

Women in Delhi Sultanate should be included in the field of women's studies, a field that is currently lacking a wide range of research with regard to the Delhi Sultanate. However, Jahan does not use ideas or approaches from the field itself. In contrast, she strongly relies on "classical" historical studies, especially from India and Pakistan, with many of these studies being older. Additionally, her study sometimes has a rather positivistic approach. In the chapters on politics, and especially in chapter IA, she essentially renarrates Minhaj al-Din Juzjani's Tabaqat-i Nasiri, while in Chapter III, she takes the stories and anecdotes from the Sufi literature literally and renarrates them as well.

At times, the text gives the impression that it has not been revised, betraying the hand of a non-native speaker. The list of references is also rather short, and Jahan never explains why her study ends in 1388. I would assume that the year refers to the death of Firuz Shah Tughluq. However, maybe 1398 is meant, which is when Timur sacked Delhi. As a chronological endpoint, 1398 would be far more common. Finally, her assumption of the non-existent boundaries between private and public spheres would have benefitted from further explanations.

Two additional aspects of the study, which shape its overall results, are also worth mentioning. Both of these aspects seem to be related to the time of writing rather than the time being discussed. Firstly, Jahan seems very involved with her topic. This especially becomes clear when she deals with Raziya's "glorious" (46) reign (a reign, however, that lasted only about four years and had a rather limited long-term impact) and scorns her contemporary critics. To name only two examples, she writes of "Minhaj [al-Din Juzjani, author of the Tabaqat-i Nasiri] and others of this type" (36) or "the bachelor Isami's misogynist approach" (44) [Abd al-Malik Isami, author of a verse chronicle named Futuh al-Salatin]. It is obvious that the author's objective was to present women as having had (almost) equal rights in medieval India.

Secondly, there is a religious overtone to the study. In addition to repeatedly highlighting the advantages Islam brought for women (as in 90 or 115) she states, for example, that in the time being studied, the Sufis granted more liberties to women than men regarding fasting, "[...] perhaps in consideration of their weak constitution" (93). This argument fits into an Islamic image of women. At times, she becomes almost apologetic: "These mystic orders served as beacon light for the Indian Muslims. The eminent personalities of these orders, presented the ideals of Islam in a pristine form [...]" (90). However, this approach does not concern Islam alone; she also discusses social aspects of Hinduism in a rather uncritical manner.

This predisposition leads to contradictions. When repeatedly emphasizing the principal equality of men and women in terms of religious and social rights, statements like "This was the reason why the birth of a daughter was not welcomed" (148) become difficult to conclusively explain. The text demonstrates this even more clearly in other sections: "No compulsion was inflicted upon the widows to perform sati, if they opted to lead the life of widowhood. In social arena widows were subjected to humiliation and torture" (153). Considering the study's underlying assumptions that men and women were (almost) equal, such ideas do not contribute to the author's argument.

Such contradictions, obviously, concern neither the Islamicate world nor the Delhi Sultanate alone. However, they demonstrate that exploring the idea that women also played important roles freely and equally in all walks of life is quite challenging when dealing with the medieval world.

The great merit of Women in Delhi Sultanate, however, is to have thoroughly collected and presented the material on women in medieval northern India from a wide range of sources. This makes this study quite usable and a welcome contribution to the existing scholarly literate on the Delhi Sultanate.