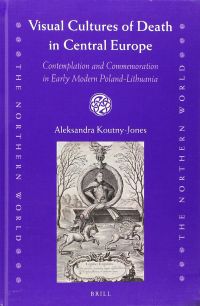 Aleksandra Koutny-Jones's study is a welcome addition in a world where English-language monographs on Polish-Lithuanian art are still a rare treat. Not only does it introduce a little-known subject to English-speaking audiences, but in doing so, it prompts the reader to ask more fundamental questions about artistic appropriation. In considering how western European art forms translated into Polish-Lithuanian contexts, the author follows the lead of other art historians who have explored the relationship between centre and periphery. [1] Her monograph promises to add to this discussion by exploring the ways in which Polish-Lithuanian patrons and artists used artistic models from Germany and Italy to create locally coded representations of death and place-specific forms of family commemoration. In pursuance of this task, the author has written a useful work that brings together a vast body of visual and textual materials previously unknown to most art historians outside Poland, Lithuania, Ukraine and Belarus.

The main aim of the book is to examine the distinctive contexts for contemplating death in early modern Poland-Lithuania, which included visual representations, architectural forms and unique funeral practices. In line with this commitment, the author foregrounds the Polish-Lithuanian Commonwealth as 'a society profoundly preoccupied with death' (3). But whereas western Europe had already created an established iconography of death by the late Middle Ages, in Poland-Lithuania the larger commissions of macabre and memento mori artworks began to proliferate only in the early modern era.

The book's first chapter outlines the reasons for such developments in this specific time period. The mendicant orders, particularly the Observant Franciscans, the Capuchins, and the Augustinian friars, saw death-related iconography as a means of strengthening conformist worship in post-Tridentine Catholicism. The Jesuits' emphasis on the doctrine of purgatory also played a role. These attitudes coincided with the wider availability of death-related literature, often graphically illustrated, and the circulation of single-sheet prints depicting macabre motifs. No less important were the local experiences of mass mortality: the recurrent epidemics of the plague, typhoid fever and smallpox, as well as the fatalities suffered by the populace in perennial wars. As an example, three large eschatological artworks were commissioned for the Church of the Holy Trinity in Krosno (Ruthenian Voivodship), following attacks by Swedish and Transylvanian armies in the mid-1650s (51).

The next two chapters deal with macabre iconography, tracing the adoption of western European visual tropes by patrons in Poland-Lithuania. Chapter 2 examines the personifications of Death as a skeleton. It demonstrates that illustrations in European anatomical treatises were the medium through which this artistic theme was appropriated for local commissions. Chapter 3 concerns the contribution of Polish-Lithuanian Franciscan Observants (known locally as the Bernardines) to the popularization of the 'Dance of Death' motif in the Commonwealth. The value of these chapters lies in demonstrating how pan-European macabre iconography merged with local traditions. A strong focus on iconography rather than on the divergence from western European use, however, sometimes creates the impression that the local renditions of memento mori themes differed from the German and Italian variations merely in the depiction of Polish-Lithuanian dress and the inclusion of local personalities. Concentrating on such small differences between local and western European depictions of familiar visual tropes inadvertently implies a derivative status for Polish-Lithuanian representations of death. The author might have bypassed this analytical deadlock if she had focused the argument on what is otherwise her strength throughout the book: the careful examination of specific contexts and idiosyncratic lived experiences that led to local preoccupations with death.

The last two chapters examine funeral and commemorative practices. Instead of emphasizing western European models, as in the earlier chapters, the author portrays what was typical for Poland-Lithuania. Chapter 4 brings to life the lavish Polish-Lithuanian funeral ritual, with its tireless vigils, sumptuous processions, grand temporary decorations and copious material props. Chapter 5 discusses centrally planned domed funeral chapels and the Calvary in Zebrzydów (today Kalwaria Zebrzydowska) as manifestations of local attitudes to death. Both chapters tap rich visual and material sources and provide a number of notable commemorative practices with distinct funeral art forms that make Poland-Lithuania an interesting area of study, even for a non-specialist reader.

As the author states, the goal of this monograph is to 'synthesise a diverse body of artistic material previously omitted from international scholarship' (13). It delivers handsomely on that promise. Making this material available to the English-speaking reader for the first time in such a comprehensive format, Koutny-Jones' study will appeal to historians of Polish-Lithuanian art and visual culture, scholars of East Central Europe and specialists in death studies. Clear and informative, the book has the potential to become a standard English-language reference on the subject.