Peter A. O'Connell: The Rhetoric of Seeing in Attic Forensic Oratory 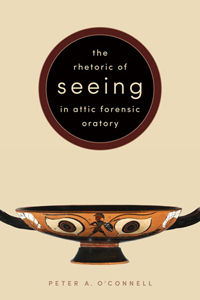 O'Connell's stimulating and well-argued monograph makes an important contribution to the growing scholarly appreciation of performative aspects of Attic Oratory. Since Edith Hall's 1995 seminal article on performance in Athenian forensic oratory, [1] there have been numerous attempts to approach what is an appealing yet challenging topic. Oral, agonistic performances were central to two complementary spheres of Classical Athenian public life, the political fora and the theatrical stage of democratic Athens.

Whilst there is no doubt that oratory, whether performed in a formal (the lawcourt, the assembly or epideictic contexts) or an informal setting involved performances by different characters in different capacities, it is difficult to retrieve and reconstruct the full spectrum of the original, live performances. Scholars have thus tended to look for traces of theatrical elements in the extant speeches of the Attic orators. However, with a few well-known exceptions (for example, Aeschines and Demosthenes' speeches in the trials on the Crown and the False Embassy, and later testimonies in biographical sources), we lack evidence regarding the performances of speakers, both those who had received formal rhetorical training in rhetoric and those who had adopted rhetorical tropes through osmosis. We still know little about their gestures, movements in space, and the delivery (hypokrisis) of their speeches.

In his monograph O'Connell focuses mainly on forensic oratory but also looks at assembly and display oratory when he needs comparanda. He asserts that the surviving forensic speeches in the corpus of Attic Oratory "are records of and evidence for actual court performances" (7). He maintains that in these speeches we can identify elements, such as lexical choices and "appeals to the imagination" that have had an effect on readers across time periods, just as they would have had on their audience of jurors in the Athenian lawcourts. O'Connel's argues, crucially, that one should consider such features "as part of a unified persuasive strategy that recognized the jurors as always both looking and listening", which he calls "the performance of persuasion" (8). Whilst scholarship has tended to examine what audiences would have heard in the lawcourts, he focuses his attention more broadly on "what the jurors could actually see, of the images they pictured for themselves, and of the concepts and the emotions they would have associated with their status as viewers" (8). He thus argues that seeing and being seen in the competitive context of the lawcourts were part of a malleable and complex dynamic with a range of cognitive ramifications.

The book is divided neatly into three parts (each consisting of two chapters), in which O'Connell examines three different perspectives of what he terms "the rhetoric of seeing": Part One is devoted to "Physical sight", Part Two to "The Language of Demonstration and Visibility" and Part Three to "Imaginary Sight". These three parts are complemented by a helpful introduction that presents the objectives, the methodology of the book, and an overview of the Athenian legal system, and a conclusion. Finally, an helpful appendix, put together with the non-specialist in mind, provides readers with useful information on each of the speeches discussed in detail earlier in the book (a brief summary, its legal context, and a note explaining how each speech employs the "rhetoric of seeing"). The bibliography is comprehensive, inter-disciplinary, and up-to-date.

In Chapter One ("Visual Rhetoric and Visual Evidence"), O'Connell discusses the different ways in which references to the appearance of litigants could be manipulated by opposing speakers in order to take advantage of jurors' biases. In four case studies he analyses how speakers sought to stir jurors' bias against their opponents and used visual demonstrations that were meant to operate as evidentiary material for the jurors' consideration. He observes that this 'visual rhetoric' predominates in Demosthenes and Lysias' speeches but is absent from inheritance speeches (including those of the inheritance specialist, Isaeus). He is suggesting, therefore, that these types of cases did not offer fertile ground for visual demonstration. His suggestion seems to be confirmed by the fact that a passage (Isae. 6.59) in Isaeus' single surviving speech not delivered in connection with an inheritance case echoes the Lysianic case-studies discussed in the chapter. However, a passage in an inheritance speech by Isaeus (5.39) and its wider context may indicate that appeals to visual rhetoric may not have been deemed inappropriate to speeches delivered in inheritance cases after all. The hypothesis that visual elements, such as appeals to vision, might have been excised post-delivery and before publication of the speech, because they did not make sense to later audiences (51-52), is bold but not too convincing; should the preferences or practices of a single epitomizer be taken to reflect wider trends?

Chapter Three examines the ways in which language denoting demonstration and visibility is being employed by orators in connection with the presentation of witnesses and identifies interfaces with medical and philosophical texts, which employ similar vocabulary. In Chapter Four it is argued that such language of demonstration is part of a "rhetorical strategy of attributing to the jurors special, authoritative knowledge", which often seeks "to equate jurors with witnesses" (109).

In chapter Five, O'Connell discusses the ways in which the vividness of forensic accounts enhanced their credibility and looks at specific examples from three well-known public speeches (Aeschines 3, Demosthenes 19, and Lycurgus 1). One should remember, he rightly cautions, that vivid narratives were but one element in the complex operation of persuasion, in which further contextual factors might have played a role. Finally, in chapter Six, he examines how the orators described scenes from the past that echoed jurors' real-time experiences in the lawcourt. They thus established links between internal audiences they conjured up and the real audience trying the case and created bridges between the past and the present. He points to similar techniques used in Thucydides' History and Lysias' Funeral Oration in connection with famous battle descriptions and discusses their potential to evoke powerful emotions in the audience.

In conclusion, O'Connell's monograph offers refreshing new insights that will help enhance our appreciation of the art of persuasion in Classical Athens. It deserves to be read by a wide audience of specialists and non-specialists.