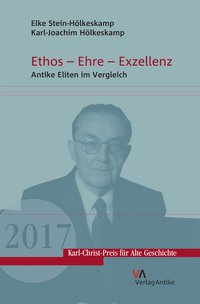 This compact volume marks its authors' receipt of the Karl Christ Prize, 2017, in recognition of outstanding achievement in Ancient History. It consists of an account of the life and career of Karl Christ (1923-2008) by Hartmut Leppin and Stefan Rebenich (9-12), laudationes (for Elke Stein-Hölkeskamp by Hartmut Leppin, 12-20, and for Karl-Joachim Hölkeskamp by Stefan Rebenich, 21-82), and a lecture, in three parts, by the prize-winners themselves (31-75). Bibliography and publications lists occupy the remaining pages (77-128).

In a dense and abstract introduction, Karl-Joachim Hölkeskamp offers prolegomena on the concepts and categories essential to the construction of a framework through which ancient elites can be compared (31-41). The claims of individuals to power and influence are grounded in a variety of theoretically distinguishable but in pre-modern societies normally combined Prominenzrollen (from the sociological theory of Niklas Luhmann). These are to be understood via Bourdieu's framework of habitus, social, cultural, and symbolic capital, and the fields in which these operate. The various Prominenzrollen contribute to the elite individual's habitus, the embodied skills that both structure the agent's behaviour in social and cultural contexts and are structured by the contours of those contexts. The contexts in which habitus manifests itself are the 'fields' in which actors can bring to bear, invest, and amass the various forms of 'capital' that underpin inequalities of power. A further element is added via Georg Simmel's theorization of competition in terms of conflict between individuals for a prize adjudicated by a third party. Such competition can be socially productive; it is the constituency before whom competitors are called to account that sets the norms by which competition is regulated, and the fiercer it is, the more normative these become, to the point of constituting a code of honour that both channels and constrains elite competition.

In the second part (43-59), Elke Stein-Hölkeskamp discusses elites in Archaic Greece. The most common of the relevant Greek value-terms (such as agathos) designate personal qualities of a plurality of individuals rather than furnishing equivalents to "nobility" or "upper class". The personal traits and forms of achievement that mark the lifestyle of the elite and underpin higher social status in Archaic Greece emerge particularly through the criticism of poets such as Tyrtaeus, Archilochus, and Xenophanes, who exhibit a preference for qualities that will bind the elite more closely to the community. The Archaic period sees the resolution of the allegedly single, undifferentiated Prominenzrolle of the Homeric hero into a variety of spheres of action in which prominence can be achieved, whether through the acquisition of economic capital as head of household or in the forms of display that wealth facilitates. Archaic poetry focuses both on the dangers of excess in the pursuit of wealth and on the risks to one's status posed by economic instability. Further changes in the opportunities for elite individuals to amass and deploy social capital are conditioned by the development of the polis and its institutions. These might limit elite power, influence, and competition and promote communal ends, but still reward success in the traditional fields in which elite qualities are manifested. Politics is only one field among many, and success in one by no means guarantees success in others. "Der Grund für diese mangelnde Konvertierbarkeit unterschiedlicher Kapitalien," the author concludes (59), "mag darin liegen, daß [sic] ein einheitliches Regelwerk fehlte, das alle Felder hätte einbinden und aufeinander beziehen können. Das Vakuum, das durch das Fehlen eines solchen Regelwerks entstand, kann als kulturspezifische Besonderheit des archaischen Griechenlands mit seiner Vielzahl von kleinen autonomen politischen Einheiten interpretiert werden."

In the third part (61-75), Karl-Joachim Hölkeskamp deals with the political class in the Roman Republic. The typical view of the republican nobilis as a generalist is not wrong: the dominant Prominenzrolle of military leadership might have been the most important sphere in which rank and reputation could be established, but politics, religion, law, oratory, and patronage also mattered, and though the culture of competition adapted to changing circumstances as the Republic developed into an imperial power, specialists never really emerged. Even under the Empire, the model of the aristocratic amateur, defined not only by the exercise of senatorial and administrative power, but also by lifestyle, never fully disappeared. Access to the political field (in Bourdieu's sense), and so to honores as institutionalized in the cursus honorum, was restricted to a narrow, more or less homogeneous landed upper class, with the nobiles - those who had emerged as more than ordinarily successful in the permanent competition for honores and who thus laid claim to honos, dignitas, and auctoritas - at the apex of the hierarchy. The populus had a major role as Simmel's dritte Instanz in permitting, through election, the maintenance and reproduction of this oligarchy, maintaining its hierarchy and balancing elite power-relations, but the symbolic dimensions of the occasions in which social capital was performed served to confirm the cultural hegemony of the ruling class.

The prize lecture itself is fully representative of the approaches and strengths lauded in the remarks of Leppin and Rebenich. Its methodologies will be familiar to readers of the authors' earlier work. As is perhaps inevitable in a showcase of this sort, the presentation is heavy on theory and lighter on evidence, though Part III is fuller in that regard than Part II. Familiarity not only with the evidence but with its treatment in the authors' more extensive discussions is required to fill in the gaps. This makes it difficult to evaluate the work as a contribution to the wider debate: inevitably, there is little room for detailed analysis and interpretation. Part III ends with the affirmation that a framework is herein established for the comparative analysis of ancient elites; but most of that work remains to be done - the comparison between Archaic Greece and the Roman Republic is largely implicit and the two cultures, though interrogated by the same methodology, are more or less left to stand side by side

To test the volume's theories we should need to apply them to the data, something neither the volume nor this review can attempt. But we might observe that the authors' chosen methods entail certain presuppositions that may condition their application. Simmel's model of competition as a conflict between two parties for a prize awarded by a third might be thought to limit a priori the agency of the dritte Instanz, even if it does acknowledge the community's ability to set the rules. The presentation of the citizens of an archaic Greek polis as "neutral umpire" (58) plays down their role as active participants in the game. In the same way, Bourdieu's notion of social capital as a resource that individual competitors deploy in the pursuit of power prompts conclusions that might not come so readily to hand were one to adopt a conception in which social capital can be the shared property of a group or community. Like Bourdieu's, the authors' premises are individualist; there may still be room for a more Aristotelian analysis in terms of competing notions of justice and equality in honour among groups.

The discussion has a lot of room for Ethos and Exzellenz. Ehre, on the other hand, appears only as an aspect of the consensus over the rules that constrain elite competition and as the goal of that competition itself. Geoffrey Brennan and Philip Pettit's account of the "economy of esteem" suggests a more nuanced and multifaceted view. [1] Their insights into the extent to which an attachment to honour can permeate all echelons of a society might be deepened by more recent sociological accounts of status inequality. [2] Frank Henderson Stewart's distinction between horizontal and vertical honour or Stephen Darwall's between recognition respect and appraisal respect might add further nuance. [3] Together, these approaches suggest that elite competition for honour is only one reflex of an attachment to esteem that pervades human societies at all levels. These and other etic notions can help strengthen our analysis of emic concepts such as Greek timê as involving the rights and claims of the community and its members as well as the elite pursuit of esteem.