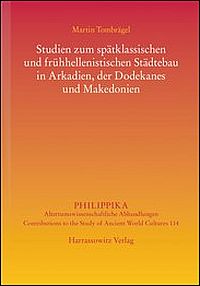 This book is a contribution to the study of urbanism among ancient Greeks. It first reviews briefly earlier Greek town-planning, noting that streets laid out on a grid pattern are found already in the archaic period among western Greeks. It then considers the differences between developing, or rebuilding, an existing city and the creation of a new city. Questions of method are considered, with an emphasis on the need to exploit both archaeological and literary evidence. Three chapters of case-studies then make up the main body of the book. The case-studies are chosen firstly because considerable evidence is available, but also because they were created in different geographical regions and in different socio-political environments. They cover Megalopolis in Arkadia; the Dodecanese, including coastal cities of Asia Minor (Rhodes, Halikarnassos, Kos, Knidos, and Myndos); and Macedonia (Pella, Aigai, and - very briefly - Dion, Edessa, and Mieza). All were founded in the period from 408/7 BCE to the early Hellenistic period. At that time new cities were being created that occupied a large area. In them monumental architecture was prominent, including traditional temples but also newer forms of monumental building. A concluding chapter then evaluates the conclusions to be drawn from the case-studies. It is followed by an oddly placed appendix evaluating the royal Macedonian necropolis at Aigai for chronology. There is a highly selective index of toponyms and personal names of importance to this study, and a very full bibliography of 39 pages. There is also an extensive range of maps, plans, and photographs to illustrate the sites discussed.

For the first case-study, Megalopolis, there is considerable evidence, both archaeological and literary: the foundation can be dated to 370-367 BCE and set in a clear political framework. The grandiose nature of the project, shown clearly by the name Megale Polis ("Great City"), is brought out well. It is seen also in the size of the area within the walls (c. 320 hectares), the size of the central agora, and the monumental nature of the buildings both around the agora and on the other side of the River Helisson, which runs through the site. The size of buildings is striking: the assembly-hall (Thersilion), the theatre, and the Stoa of Philip were all among the biggest of their kind in the entire Greek world. The originality of the architecture, and particularly of the Administrative Building beside the agora, is stressed. On the other hand faults are also noted, such as the problem of rain-water in the courtyard of the Administrative Building. Apparent difficulties in obtaining building materials of a quality to match the grandiose aspirations of the design are also exposed.

For the cities of the Dodecanese and neighbouring areas of Asia Minor evidence is less good, but sufficient to show a pattern. Tombrägel draws attention to striking monuments in individual cities, such as the Mausoleion at Halikarnassos and the Kolossos of Rhodes. He also argues that these new cities were all economically successful, and set a very important example for wider urban development in neighbouring areas. In the evidence for Rhodes there is a dichotomy: the archaeological evidence suggests economic success while the literary evidence suggests that in the fourth century Rhodes was stagnating. Tombrägel returns to this problem at the end of the concluding chapter, arguing that in this case neither body of evidence gives a full insight into Rhodes' development, and that it is impossible to combine the two bodies of evidence into a wholly reliable understanding of the city's history.

For Macedonia the situation is different again, especially because of the influence of the kings. Tombrägel argues that there was important urban development from the late fifth century. He then examines in detail the cases of Pella and Aigai, and notes briefly what is known of Dion, Edessa, and Mieza. He discusses urbanism under King Archelaos in the late fifth century, and under Cassander around 300 BCE. Literary evidence for urban development in Macedonia is poor, although archaeological evidence shows that Cassander was a far-sighted urban planner. There is also the difficulty of assessing the success of urban foundations in Macedonia given the political and military problems from which Macedonia often suffered.

Repeatedly in the various chapters and again in the conclusion Tombrägel stresses the need to exploit both archaeological and literary evidence, even when the two do not obviously match, and he is clearly right to do so. Nonetheless on occasion his assessment of evidence can be questioned, as examples from his discussion of Megalopolis show. He assumes (30) without argument and without citing evidence that Megalopolis was intended to be the capital of Arkadia, but that proposition has often been questioned. Indeed it is not clear, and has not been discussed by scholars, what relevance the concept of "capital" has for the study of urbanism in classical Greece (outside kingdoms like Macedon). At page 44 he suggests that municipal purposes were served by buildings north of the River Helisson and federal purposes by the Thersilion south of the river, but the theatre, surely municipal, was beside the Thersilion. At page 45 note 231 literary texts are cited to show that the Thebans gave financial support for the building of Megalopolis, but they show only military and political support. Most strikingly, at page 48 Pausanias 8.33 is cited to show that in his day (second century CE) Megalopolis was in ruins, but Pausanias had already described Megalopolis as a functioning city, admittedly decayed but still possessing e.g. council-house and gymnasium.

At page 140 it is suggested that before the foundation of Megalopolis Arkadia had no tradition of urbanism, but the tradition existed. Geophysical prospection has now shown towns in Arkadia with a planned grid-pattern of streets at Kiparissia and Perivolia (both near Megalopolis) and at Tegea (all three older than Megalopolis), and also at Mantinea (possibly older), at the resited Stymphalos (roughly contemporary), and at Heraia (undated). Tombrägel's case-studies do not mention the importance of geophysical work for the study of Greek urbanism. (Kiparissia is noted at page 27 note 96 with no reference to geophysical evidence.)

To conclude. Tombrägel has made a very useful contribution to the study of Greek urbanism, by demonstrating clearly the importance of the large and innovative new cities created in the late classical and early Hellenistic period. Further work can now build on his arguments by expanding, and sometimes challenging, them. For instance, he describes the design of Megalopolis, admittedly very large, as megalomania (35, 47) - what of Messene, Megalopolis' neighbour and contemporary, almost as large?