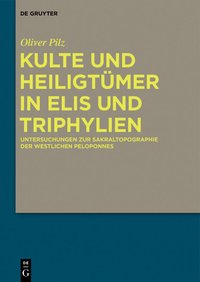 Curiously, although there have for some years been general studies of sanctuaries and cults in the neighbouring regions of Achaia (Osanna 1998), Arkadia (Jost 1985), and Messenia (Zunino 1997), there was no such comprehensive study of the sanctuaries and cults of Elis and Triphylia. Pilz has now filled that gap. One Eleian sanctuary has of course received enormous attention in both general studies and specialised publications, namely the sanctuary of Zeus at Olympia, and so Pilz wisely excludes Olympia from the sanctuaries covered in his book, while referring to aspects of it where necessary. Chronological coverage is from the Geometric Period to the middle Roman Empire, though cults that were clearly introduced in the period of Roman domination are omitted (2).

After 13 pages of introductory matter there are 401 pages of text. There follow a table of illustrations, and indices of inscriptions, of literary texts, of places, of persons, gods, and heroes, and of 'Sachen'. The book contains 54 illustrations (maps, plans, photographs, and drawings) on 33 pages.

The text opens with a short introductory chapter. The theme of the book is set out, with an overview of previous research, followed by a statement of the available forms of evidence and the problems of interpretation. There is then a geographical description of Elis and Triphylia, noting the main sub-regions into which the area is naturally divided. The chapter closes with a brief account of the settlement-pattern and the main historical developments in the region.

The main part of the book (27-385) considers the cults and sanctuaries found in the area, taken one by one. The treatment is organised geographically by regions: first a lengthy treatment of Koile Elis, with a considerable section devoted to the town Elis; then Pisatis (not including Olympia), treated briefly; and finally an extended treatment of Triphylia, organised according to the individual cities of Triphylia. Northern Eleiean territory near Achaia and also Akroreia, the hilly area east of Elis and near Arkadia, are omitted without explanation, though both had been mentioned briefly in the geographical summary in the introductory chapter: it would have been useful for any reader unfamiliar with the geography and history of ancient Elis to explain that the omissions are justified because the two regions are largely unknown through lack of evidence either literary or archaeological. After the account of the cults and sanctuaries of each region or sub-region treated - for instance for each city of Triphylia - there is a summing-up of the findings.

The text then closes with a short section (387-401) headed 'Elis - Olympia -Triphylien' and is divided into three topics. The first is relations between the town Elis and the sanctuary at Olympia, a topic that, as Pilz notes (390), has been discussed at length elsewhere: the brief treatment here adds little. The second topic is transfers of cult and political use of myth, and Pilz suggests that Elis pursued an "aggressive Kultpolitik": the suggestion is interesting, but the space devoted to it - less than two pages - does not allow the argument to be developed. Finally, a few pages are devoted to Triphylia, looking for patterns in the distribution and socio-political significance of cults in the region: some interesting points are raised - e.g. the rarity of cults of Zeus in Triphylia - but not explored in depth.

The main value of the book is its treatment of individual cults. Treatment varies according to the evidence available, and only in a few cases is the evidence rich (e.g for the cult of Dionysos at Elis, 41-68). Pilz nonetheless sets out clearly whatever evidence happens to survive, including even cases where a votive deposit shows clearly that there must have been a sanctuary nearby although there is no other evidence of the sanctuary (e.g. the rich deposit near the modern village Tragano, 164). He also uses evidence from cults elsewhere that may illuminate cults in Elis and Triphylia: for instance, little is known about the cult of Aphrodite Pandemos in the town Elis but Pilz shows that both at Athens and on the island of Kos Aphrodite Pandemos was associated with synoikism, and so suggests that may also be the case at Elis. Besides presenting whatever relevant evidence may survive, Pilz also records and analyses modern discussions of a cult or other research that may be relevant, drawing on a very wide range of bibliography. The reader is thus offered a very full account of what is known or thought about any cult or sanctuary, and about the combination of cults and sanctuaries in different regions of Elis or Triphylia. In many cases, as Pilz freely admits, little is known, but that little is clearly assessed and presented.

Given the amount of detailed information presented and discussed by Pilz, it will not be surprising if readers with specialist knowledge find occasional points on which they disagree. It seems odd, for instance, that, when discussing the date at which Elis began to strike coins showing the god Zeus Pilz cites (75 note 556) the important paper by Psoma 2008 but does not take account of the evidence from coin-hoards presented by Psoma to show that the coinage could well have begun earlier than Pilz allows (74 note 550). Such disagreements however do not detract from the merits of Pilz's work: they derive rather from the wealth of material that he presents.

It is not always easy for the reader to find a way through that wealth of material. Topics and bibliographical references quite often crop up several times in the book, and are cross-referenced carefully. However, the nature of the cross-references sometimes makes them awkward to follow. Footnotes are numbered consecutively throughout the book, rising finally to 3013. When a publication is first cited full bibliographical details are given in a footnote, and at any later citation another footnote refers back to the original footnote; thus the reader wishing to know what footnote 3007 on page 397 refers to is sent back to note 147 (22). Also, the chapters are divided into numbered sections and subsections, and there are frequent cross-references between sections: e.g. note 2990 on page 393 has "s. Kap. 2.1.14", but it is difficult to find 2.1.14 (133-9) without using the table of contents at the beginning of the book. There is no bibliography: since a great deal of material from elsewhere is considered in order to illuminate Eleian and Triphylian cults, it is entirely reasonable that no attempt is made to list in a bibliography every item cited, but it would have been useful to have an oversight of the publications on Eleian and Triphylian cults and sanctuaries.

Because of the wealth of material presented clearly and systematically in this book it will be an indispensable work of reference for anyone interested in the religious practices of classical Elis and Triphylia. [1]

[1] Readers of Pilz's book may care to note that since it appeared another book on Triphylia has also been published: Joachim Heiden (ed.): Die antike Siedlungstopographie Triphyliens, Berlin 2020, with a chapter (139-153) by Jana Johr on 'Die Heiligtümer Triphyliens', clearly written before Pilz's book appeared.