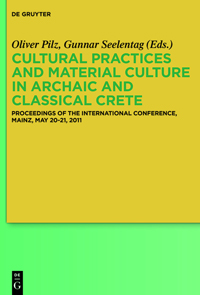 What is Archaic or Classical Greek culture? To the majority of people 'Greek culture' is a kind of amalgam of temple architecture (the Parthenon), epic poetry, victory odes, drama, philosophy, free-standing sculpture and some of the better known black- and red-figure vases (by Exekias or the Berlin painter). Scholars might point to shared Greek institutions (the symposium, the festival celebrating a patron deity), or to shared values (a 'culture of competition' played out both in athletics and warfare, whose chief material expression was the embellishment of sanctuaries). The underlying assumption has, since the nineteenth century, been that speakers of the Greek language share equally in this common culture and its material expression. Material culture is the outcome of underlying 'Greekness' manifest first in language and then in literature.

Despite Crete's centrality to the philosophical and political investigations of Plato and Aristotle Archaic and Classical Crete has always been hard to fit in to this picture. Cretans in the Archaic and Classical period produced no great literature, built no exceptional temples and created no enduring works of art. Cretan differences from mainland Greece were recognised as early as the 1940s. Cretan exceptionalism has been variously explained either through its 'Dorian' institutions or its 'Minoan' heritage (or combinations thereof), and Cretan austerity to the effects of drought. Since the 1990s scholars have tried to seek more sophisticated explanations for Cretan exceptionalism. The book under review here is only one of a series of monographs and edited volumes that have appeared recently. [1] This volume (which, though published in Germany is written entirely in English) represents another substantive contribution to this growing debate. It brings together archaeologists, historians epigraphers from Germany, Greece, Italy, Denmark, Belgium and the United States. It promises a genuinely interdisciplinary approach to the problem of Cretan exceptionalism. Does it deliver?

Well, mostly, yes: the various contributors offer a range of insights into Cretan material practices and Cretan institutions (in particular political institutions). Sometimes they shed light on how and why these differ from those to be found on the Greek mainland. After an introduction (which breezily overstates the originality of this volume, on the grounds that it is the only one to address the 'Classical' period) there follow two archaeological case studies focusing on particular sites (Azoria by Haggis and Axos by Tegou). The next two archaeological contributions, by Erickson and Rabinowitz, concentrate on Knossos, which has a mysterious gap in the sixth century. Erickson tries to explain why we have a gap in Knossos but austerity elsewhere in Crete. Rabinowitz looks at kraters and the role of commensality in constructing elite masculine identities, engaging explicitly with the revisionist views on Greek 'aristocracy' put forward by Duplouy. [2] How, in concrete material terms did a Cretan aristos differ from a mainland one? Rabinowitz's answer is not mine but is nonetheless an important contribution to this wider debate.

There follow a series of contributions by historians (Seelentag, Kristensen, Link, Perlman and Marginesu) whose focus is on inscriptions and texts. Texts relating to this period are few and late, but the epigraphy is a rich source for understanding Cretan institutions and rewards re-examination. Perlman's thorough review of the evidence for tribal names on inscriptions certainly yields new insights on a number of peculiarly Cretan institutions (including the mysterious startos), as does Link's systematic comparison of Cretan with Spartan evidence. [3] Other contributions disappoint. Seelentag's attempt to link Cretan epigraphy with Homeric epic only references the (largely German) scholars who believe in the historical reality of 'Homeric society' and ignores the work of (largely British) scholars who don't. It is perhaps fitting that only Marginesu (the sole Italian) remains true to the great tradition of Cretan epigraphy established by Federico Halbherr and Margherita Guarducci, where the material dimensions of inscriptions are given equal weight to their textual content. Marginesu recognises that the Great Code and other Gortynian inscriptions are as much monuments as texts, and that this affects how they are re-used and re-interpreted in later (Hellenistic to Roman) times.

The final series of articles (by Sporn, Pilz and Brisart) bring us back to archaeology and to art. Sporn's comprehensive re-assessment of graves and grave markers brings some recognisably 'Classical' sculpture to our attention. This sculpture is fourth- and not fifth-century in date and so emphasises that it is only from the fourth century that Cretan material culture begins to conform to norms of 'Greekness' established in Athens. Pilz deals with the longstanding problem of narrative art on Crete. He finds narrative not on painted pots but in terracottas, and notes some regional variations within the island. The quantity of such narrative art is still nonetheless pitifully slight compared to other regions of the Greek-speaking Mediterranean. Brisart undertakes a sub-regional study of Eastern Crete (where material culture seems to have been less austere), and tries to assess the extent of Crete's links with the wider Mediterranean world. Even in Eastern Crete, it seems, there were institutional and cultural brakes on adopting features of the wider 'Greek culture'.

In sum, this volume makes a substantial contribution to current debates about the significance of 'Cretan exceptionalism' and Crete's role within the wider, largely Greek-speaking Mediterranean in Archaic and Classical times. All of the articles are of a high standard, and engage closely with the most recent scholarship. The comparative method lies behind most of the contributions, though there is no attempt at systematic comparison of this island with others. If there is still a tendency for historians to deal with texts (and to treat inscriptions as texts), and for archaeologists to deal simply with material evidence, there is also an equal willingness to talk across disciplinary (and sub-disciplinary) divides in order to address wider, broadly historical questions. What then are these questions?

Each scholar is likely to come up with different answers to this, such as 'why didn't democracy emerge more often'. Whatever questions we prefer, one thing is clear. We cannot let our ancient texts - the master-narratives of Athens and then Rome - determine what these questions should be. Culture is broader than texts, and the cultures of the ancient Mediterranean were defined as much through their 'material entanglements' as through language. This is still true today - think of the differences between British and American culture in their attitude and use of guns. Such material culture differences exist within modern nation states, where an educated citizen of Thessaloniki is as likely to be every bit as disdainful towards the 'gun culture' of Cretan Sphakia as a Londoner is of a Texan's constitutionally-affirmed right to occasional mass murder.

[3] Though Link does not seem to understand the meaning of the English word 'facile', where his gloss on page167 note 52 gives the opposite sense to the one intended.