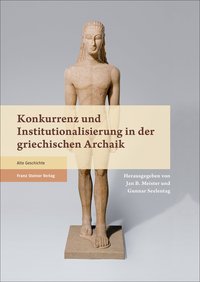 The volume, based on a workshop in Berlin, 03.11. - 05.11.2016, starts with a conceptualising introduction by the editors noting that the usual description of the Greek Archaic as a period of high competitiveness and emerging institutionalised statehood cannot be satisfying, since the available neo-evolutionist models of state formation do not easily apply to the Greek development, and a simple characterisation of Greek society as agonal cannot explain the reason for its competitiveness. The editors propose to view institutionalisation as a gradual emergence of social institutions, and competition as competing for the favour of a 'third instance', possibly an abstractly imagined 'public'. They draw attention to the possible ways of renunciation of competition, above all 'cartelisation' which in the Greek context would mean a power consolidating agreement among the elite at the expense of the commoners. Building on these concepts they propose three horizons of questions for the following discussions: how institutionalisation through competition, institutionalisation against competition, and competition of institutions could have interacted in Archaic Greek societies.

The contributions follow this conceptual framework with variable degrees of consistency. Jan Meister (Geltungskonkurrenz zwischen Praktiken des Prestigeerwerbs als Problem des archaischen 'Adels') emphasises the plurality of different fields of elite competition and multiple criteria for excellence (physical strength, good outlooks, wealth, military skills, excellence in council) revealed by the poetry of Tyrtaios and Homer, thus a competition of different horizons of possible values during the early Archaic period. He suggests that these various fields of competition underwent subsequently a process of institutionalisation, as better objectivated criteria for prestige were established by the formalisation of polis offices and the panhellenic games.

Gunnar Seelentag (Das Kartell. Ein Modell soziopolitischer Organisation in der griechischen Archaik) focuses on the process of cartelisation through which the elites sought a stable exercise of power over social inferiors. The elites regulated competition among themselves - an example of institutionalisation against competition - and allowed social inferiors a restricted and controlled access to the political process, thus making them a 'third instance'. Comparably, Winfried Schmitz (Widerstreitende Kräfte. Zu Konkurrenz und Institutionalisierung im archaischen Griechenland) illustrates the difficulty to enforce the rules of competition among the elite, producing frequent expulsion of vanquished competitors, and tyrannies as examples of exorbitant competition. The search for a 'third instance' led to the legislative regulation of norms (reflected by the concept of a balanced universe in early philosophy) and eventually to an acceptance of the people as the 'third instance' for the elite competitors.

Christopher Ulf (Die relativ Besten grenzen sich ab. Aristokratisierung durch die Aufhebung des Wettbewerbs im archaischen Griechenland) focuses on the emergence of Greek aristocracy. He views the Homeric epics as reflections of 'big man' societies, describes the basileis as aggrandisers according to the anthropological model proposed by Brian Hayden, and views the process of distancing of these leaders from the demos, hand in hand with the reduction of competition between them, as the emergence of aristocracy. This view is supported by Peter Zeller (Das mittelalterliche Island und die griechische Archaik. Grenzen und Perspektiven eines diachronen Vergleichs) comparing the basileis to the leaders (go&#240ar) in Medieval Iceland and describing them as a kind of 'big men', while pointing out a different outcome of the leaders' competition in Medieval Iceland and in Archaic Greece (personal versus collective rule).

Three contributors focus on political institutions. Christoph Lundgreen (Schüsselmonopole oder Governance-Funktionen? Alternative Annäherung an Staatlichkeit in der griechischen Archaik) interprets a Greek state as a managerial rather than monopolist political authority, shows that polis made decisions centrally yet relied on decentralised enforcement, while its regulation of burial practices further diminished the role of families and households. Stefan Frass (Die Institutionalisierung egalitärer Konkurrenz in der homerischen Volksversammlung) describes the popular assemblies as the only genuinely political institution in Homeric society and regards the basileis as a social institution the members of which, although normally dominating the assemblies, had to compete to win approval of the assembled people who collectively acted as the deciding political entity. Fabian Schulz (Dorische Wurzeln oder Kennzeichen der Stammesgesellschaft? Aufkommen und Verbreitung von Ältestenräten in der archaischen Zeit) connects the establishment of councils of elders, attested mainly in Dorian regions, with several specific social factors including an enslavement of rural populations, which secured the economic independence of rural landlords, and expansionist wars necessitating a division of labour between young and old. The councils of elders appear thus as the result of a competition between age groups in the course of which the old secured political power.

Among the authors relying essentially on archaeological data Erich Kistler (Zwischen stasis und eunomia. Banketthäuser und soziale Gruppenbildung im archaischen Griechenland) discusses the free-standing banqueting houses coming into fashion during the Archaic period which, combined with the evidence for symposia in the written sources, seem to indicate the emergence of competing elite groups. These groups produced a permanent danger of stasis but could have been integrated into the polis framework by the sacred roads connecting the banqueting houses to the civic space of the formative poleis. Nadin Burkhardt (Konkurrenzverhalten und Institutionalisierungsprozesse in den westgriechischen Kolonien) traces the development of burial rites in the Sicilian and Italian colonies attesting the competitive behaviour of the elite, and views certain criteria for the growingly ostentatious grave monuments as a part of the institutionalisation of Greek society. A comparable development is described by Klaus Junker (Vom Prachtgemaß zum Riesentempel. Archaische Kolossalwerke als Mittel der Konkurrenz) discussing the enormous increase in the size of grave markers and dedications during the Archaic period, culminating with the colossal early 6th century kouroi and the giant temples in East Ionia. The shift from personal to collective display at ca 560 is interpreted as a sign of development towards more political participation at that time.

Tanja Itgenshorst (Intellektuelle Konkurrenz und kanonisierte Weisheit. Konkurrenz-Diskurse im politischen Denken der archaischen Zeit) focuses on the political thought and concludes that it manifests itself in the thinkers' informal promotion of own ideas and criticism of the opponents' views, without leading to the establishment of formalised contests. Three contributors propose different approaches to the contests in the field of athletics. Arlette Neumann-Hartmann (Von improvisierten Wettbewerben zu institutionalisierten Festspielen. Die Entwicklung sportlicher Agone im archaischen Griechenland) traces the development of athletic contests throughout the Archaic period, viewing the late Archaic agonistic festivals as 'objectified institutions' for competition both within the members of elite and between the poleis. Claas Lattmann (Epinikien als pragmatischer Ausdruck institutionalisierter Konkurrenz) traces the evidence of Pindar's and Bakchylides' epinician odes for the institution of praising athletic victories in the early Archaic period, before the institutionalisation of the epinician song during the 6th and early 5th centuries. He views these songs as marking both an institutionalisation through competition, establishing the favour of gods as the imaginary 'instance' for the competitors, and an institutionalisation against competition, excluding the sub-elite groups unable to participate in the contests. The volume concludes with the chapter by Elke Stein-Hölkeskamp (Kampfplätze der Konkurrenz. Felder und Foren aristokratischer Konkurrenz im archaischen Griechenland) devoted to the discussion of various forms of competition among the Archaic elites, including the informal contests in symposia and the formalised athletic contests. She emphasises the difficulties to convert the athletic victories in the Panhellenic games into political power at home.

The volume presents a collection of high standard papers, covering all the principal fields of elite competition in Archaic Greece. The focus on elite strategies is natural given the well-known competitiveness of the Greek aristocracies and the character of the evidence for the period. The articles give fresh insight into many aspects of the development of Archaic Greek society, presenting valuable contributions to the study of this crucial historical period. However, the writers largely ignore the role of the sub-elite strata, paying almost no attention to the Hesiod's famous statement that 'potter competes with potter, craftsman with craftsman, beggar envies beggar and bard envies bard' (Erga 312-313), or the claim of Solon that the people of even low status constantly strive for wealth (fr. 13.39-52 W), both suggesting that competitiveness pervaded the whole society. With the exception of Frass, the contributors view demos as an object of elite manipulation, a passive entity which, although becoming the 'third instance' for elite competition, did not participate in the competition and had to be given some rights by the elite instead of asserting them. Such a view threatens to obscure the reason of Greek agonality and the need to accept the people as the 'third instance', likely to be caused by the relative strength and self-confidence of the sub-elite strata before whom the elites had to assert, and constantly prove, their superiority.