Giuliano Garavini: The Rise and Fall of OPEC in the Twentieth Century, Oxford: Oxford University Press 2019 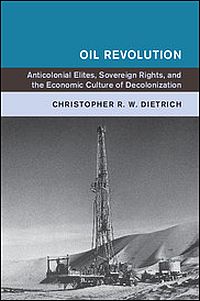 Christopher Dietrich's study on the economic culture of decolonization has received much praise for incorporating the perspective of the so-called Third World into the history of oil and international relations after 1945. [1] The "anticolonial elites," who are at the center of his intellectual history, conceptualized the energy crisis of the early 1970s as an "oil revolution" that realized their long-standing demands to acquire "permanent sovereignty over natural resources" and, thereby, to achieve the economic equivalent of decolonization. Yet, while Dietrich details the emergence and spread of the "sovereign rights program," he also notices its "paradox", namely that "national interest often dictated a path that moved against the collective solidarity of sovereign rights." (127) When sharply rising oil prices caused sovereign debt crises in many developing countries without oil reserves of their own, the economic culture of decolonization, which had "developed into a Third World consensus on sovereign rights over a period of more than two decades" collapsed "in less than two years." (301)

In general, Dietrich's argument concerning the intimate connections between decolonization, international law, the oil economy, and the idea of permanent sovereignty over natural resources, which formed the core of the scheme to create a New International Economic Order, echoes Anthony Anghie's earlier analysis. [2] However, Dietrich takes a much closer look at the anticolonial elites and their attempts at developing and implementing the sovereign rights program. He describes them as a "new international class" who dedicated their lives to changing the relations between the North and the South, while being hardly interested in the Cold War. This elite consisted of lawyers and economists from South America and the Middle East, who had received their academic education in the United States and Western Europe before conducting their home countries' economic and foreign policies. Relying mostly on the United Nations Archives as well as the U.S. and U.K. National Archives, he examines their published treatises and negotiations in international organizations.

In seven chapters, Dietrich tells the story of how the anticolonial elites developed common views concerning the transformation of the international economic order and how they tried to proliferate and implement their position within the bodies of the United Nations as well as the set-up of the producer cartel of the Organization of Petroleum Exporting Countries (OPEC). Between 1949 and 1950, according to Dietrich, the idea of sovereign rights emerged in the discussions at the United Nations, reflecting both Raúl Prebisch's theory of unequal exchange and the experience of Iranian Prime Minister Mohammed Mossadegh's failed attempt to nationalize the Anglo-Iranian Oil Company. At the Bandung Conference in 1955, "sovereign rights" became universally accepted as a primary concept and common goal of third world activism and in the ensuing strategy debates in the 1960s, OPEC emerged as the most promising institution to implement it. Thus, in the main chapters of the book, Dietrich concentrates on the "oil elites," the failed embargo of 1967, and the OPEC strategy to raise prices and acquire oil control, which succeeded in the wake of the Tehran and Tripolis agreements of 1971 and the oil crisis of 1973/74.

These events have often been recounted, but Dietrich deserves credit for more thoroughly incorporating the multiple views and perspectives of strategists from OPEC countries, something Western scholars have so far only conducted to a lesser degree. Time and again, Dietrich quotes how Arab oil elites invoked the notion of sovereign rights in order to legitimize their claims and justify their actions. Yet, he acknowledges: "That the concepts of permanent sovereignty and unequal exchange were widely touted does not, of course, mean that they alone drove policy. But neither did their existence as a set of beliefs stand in opposition to their use as a deliberate diplomatic instrument by different parties or for different reasons." (258) This statement is puzzling and concerns the methodological core of an intellectual history of international relations in general and Dietrich's book in particular. To what degree do ideas about rights inform and influence the conduct of international politics? In recent times, we have grown accustomed to interpret the invocation of human rights by Western politicians in the 1970s as largely strategic. Dietrich himself is quick to dismantle how Kissinger used the rhetoric of human rights in order to undermine claims for a new international economic order. (290) Yet, concerning the "anticolonial elites" under scrutiny, Dietrich cannot make similar distinctions as he can only rely on their public statements. Thus, we do not know how much of the rhetoric on sovereign rights, a New International Economic Order and third-world solidarity was merely strategic in order to suit nationalist agendas to acquire power and wealth. Therefore, Dietrich's study does not conclude the debate on anticolonial elites and their impact in international relations in the 20th century but rather invites future research.