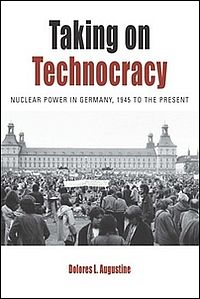 In the past few years, there has been a veritable boom of research on the history of nuclear power and its relation with society in Europe [1]. A substantial number of publications have focused on Germany, not least due to the German government's decision in the wake of Fukushima to definitely phase out by 2022. Much of this research has focused on Wyhl, the birthplace of the (West-)German anti-nuclear movement. Innovatively, this protest has been studied in a transnational perspective, highlighting connections among protesters across borders [2]. The violent clashes of the 1970s and 1980s in places like Brokdorf or Wackersdorf have equally found much attention [3]. What has been missing so far, however, is a comprehensive history of public engagement with nuclear power in Germany - including and comparing the experiences on both sides of the Iron Curtain.

This is exactly what Dolores Augustine's highly readable and thoroughly source-based book "Taking on Technocracy. Nuclear Power in Germany 1945 to the present" provides for the first time. As the title suggests, the social historian from New York interprets the conflict about nuclear power as a clash of two conflicting visions of how state and society should develop in the future. Traditional political parties, government, labour unions and business elites were deeply committed to a technology-driven model of economic modernization. The promise of prosperity had great appeal in a society emerging from a traumatic war. A younger generation, however, was more critical towards what they viewed as technocratic authoritarianism, which they associated with Germany's national socialist past. In line with recent studies, notably Stephen Milder's work, Augustine argues that the anti-nuclear movement made a "profound contribution to the democratization of West Germany" (8).

In the wake of 1968, the debate on the "Limits to Growth" and the arrival of environmentalism many young people criticized policy-makers' pursuit of economic goals and favoured a more comprehensive understanding of "quality of life". Augustine, who obtained her PhD from Free University Berlin in the late 1980s, thus broadly subscribes to contemporary interpretations of value change underlying the rise of "new" social movements. Nevertheless, her analysis does not stop there. Drawing on a range of social movement theories, she proposes an integrated analytical framework. Successful social movements - she argues - used four factors to make an impact: first, "cultural power", the power of words and images to influence public opinion; second, "organization" and the mobilization of resources; third, "negotiation", namely, the ability to bargain with the state or take legal action. Finally, "disruption", describes the power to voice grievance by taking the streets. Among these factors, Augustine highlights the importance of "cultural power", and the opportunities provided by an increasingly open public sphere across all chapters.

Augustine's book is organized chronologically in eight chapters. The first two of them include both parts of Germany. In the wake of the war, people clearly associated the atom with its initial military uses. Eisenhower's "Atoms for Peace" initiative - mirrored by similar Soviet action in the Eastern bloc - was intended to reframe nuclear as a force for good. In order to reconstruct the backdrop of perceptions against which the nuclear conflict played out, the book's first chapter offers a fascinating account of how nuclear was presented in popular culture, from 1945 until about 1970, in an international context. In spite of its pervasive presence in popular media however peoples' scientific knowledge remained limited.

The second chapter compares practices of dealing with nuclear safety in both East and West Germany. Augustine highlights that despite Western warnings in the post-Chernobyl period against supposedly unsafe Eastern technology, Western and Eastern plants did not fundamentally differ in terms of technological safety. On the Eastern side the economic and technological deficiencies of state socialism and official secrecy impacted on actual safety. Chapter three tells the so far untold transnational and transatlantic history of the transfer of counter-expertise into West Germany. Chapters four and five zoom in on the emergence of the socially inclusive protest in Wyhl and the more violent conflicts in Brokdorf, analyzing the demands of the movement, the response of the authorities, and the role of the media. Chapter six carefully examines West German responses to the Chernobyl accident, at a time when the peace and anti-nuclear movements converged, professionalized and developed alternative energy technologies. Augustine clearly emphasizes the relevance of Chernobyl. However, rather than viewing it as a turning point, she considers it "the catalyst for a new environmental consensus, whose foundations had been laid by the anti-nuclear power movement and the Green party" (180). In East Germany, analyzed in chapter seven, Chernobyl fueled the rise of the opposition first to nuclear power, and to the regime. Repressive official responses proved counterproductive and further eroded the credibility of "actually existing socialism", not least in the face of Western media coverage. Chapter eight looks at the more recent history of unified Germany. In line with Western rhetoric about their inferior safety, all East German plants were closed down. Protest continued against transports of nuclear waste to Gorleben and was rekindled, when in 2010 the Christian-Liberal Merkel government repealed the phase-out plan of the red-green coalition. Faced with the surge of the Green vote right after Fukushima, Angela Merkel made a u-turn towards an accelerated phase-out. Ironically, Merkel - a physicist - justified the need for "energy transition" by reference to the limits of technocracy: Fukushima had proven to her that "even in a high-tech-country such as Japan the risks of nuclear power cannot reliably be contained" (225).

All in all, Augustine does not only provide a fascinating, well-written and insightful integrated history of Germany's variegated engagement with nuclear power. She also makes important contributions to cultural history, the transnational history of (counter-)expertise, the history of (new) social movements as well as the history of science and "public technology" [4]. Augustine's core argument about the anti-nuclear movement's contribution to the "fundamental liberalization" of German society, following Jürgen Habermas and Ulrich Herbert, provokes further questions what the absence of such experiences meant for political culture in the Eastern half of Germany. For all these reasons, the book deserves a wide readership and will hopefully become available in German translation soon.

[1] Apart from numerous individual projects, comparative and interdisciplinary research in Europe, the US and the Soviet Union was conducted in the collaborative project History of Nuclear Energy and Society (HoNESt), http://www.honest2020.eu, 2015-2019, of which the author of this review was part.