Maureen B. M. Boulton (ed.): Literary Echoes of the Fourth Lateran Council in England and France 1215-1405 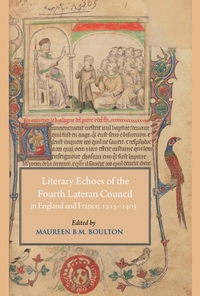 One of a cluster of volumes originating from the commemoration of the eight-hundredth anniversary of Lateran IV (2015), this tightly organized collection participates in another most welcome trend, the deconstruction of long established bipolar disciplinary, linguistic, and conceptual boundaries: classics/modern languages, lay/clerical, Latin/vernacular, learned/popular. As editor of the volume and contributor of one third of its contents, Maureen Boulton provides the reader with an expansive introduction to its major themes. While an increase in religious literature intended for direct or indirect consumption by lay audiences has long been attributed to specific canons issued by the Fourth Lateran Council, particularly those requiring annual confession and communion (c. 21) and increased diocesan preaching (c. 10), recent work has situated Lateran IV within a broader emphasis on pastoral care and moral theology and reform. Scholars have similarly stressed that the circulation and impact of Lateran IV's decrees varied widely by region: it is no accident that they spread first to the very regions most heavily populated by Paris-educated clerics familiar with the ambitious decrees of Odo of Sully. In England and France, prelates enacted reforms with "gusto" in local synods and councils and some of the earliest instructional literature (pastoralia) was produced, some of it well before Fourth Lateran (for example, Maurice de Sully's French sermons on the Paternoster, Creed, and penance).

The influence of Fourth Lateran's decrees came partly through its detailed provisions for and requirements of the laity, driven partly by the pastoral impulse prevalent from the twelfth century onwards. Firmiter credimus (c. 1) redefined orthodox belief in the face of "heresy"; other decrees urged provisions for the education of priests, exhorted bishops to appoint preachers (c.10), and required annual confession by every adult to their parish priest and reception of the Eucharist (c. 21). If the laity were to be educated via the confessional and the pulpit, diocesan clergy likewise must be trained, leading to an increased creation and circulation of pastoral materials designed to equip clergymen with the requisite knowledge now required of them. While at first the emphasis was on the basics: the ten commandments, the vices and virtues, the sacraments, essential prayers, there was soon a shift towards greater self-analysis, introspection, agency, and belief driven by the very practices promoted by Lateran IV: regular confession and preaching. As Wendy Larson illustrates, writers including Gower, Chaucer, and Hoccleve quickly appropriated the practice of confession, creating characters who invoked confessing speech to construct themselves as interior subjects with complex psychologies.

As pastoral works in both Latin and the vernacular became more available to ministers, lay persons also actively commissioned copies of existing and new devotional texts, resulting in the proliferation of vernacular religious texts: moralized and/or French Bibles and Apocalypses, translations and adaptations of scholastic textbooks including Peter Comestor's Historia scholastica, Honorius Augustodunensis' Elucidarium, and Peter Lombard's Sentences. This alone should put paid to the old trope that vernacular translations of the scriptures were automatically condemned as "heretical" and to the artificially constructed divide between lay and clerical texts. As Daron Burrows notes, illustrated Old French Apocalypses were a popular genre potentially linked to and certainly echoing contemporary eschatological angst and the reforming, pastoral, and anti-heretical concerns of Lateran IV. Vernacular Apocalypses also encouraged audiences to contemplate the eternal consequences of their actions through active engagement with text, commentary and images (197-228).

Manuals for Mass and confession, some geared towards priests and others towards encouraging active and reflective participation by lay recipients (19-26), offer rich testimony of pastoral impulses and lay desire for deeper religious understanding (74-98). Further boundary-shattering works included the devout reformer and scholastic Robert Grosseteste's Castle of Love, written in the vernacular for a lay audience yet utilizing scholastic techniques. As Anna Siebach-Larsen notes, the Castle was included in a personalized miscellany of devotional texts commissioned by Joan Tateshal where Joan is visually depicted as an active director of her own spiritual illumination. The Castle's emphasis on instruction and personal transformation would make it one of the most popular vernacular devotional texts in England (170-96).

The question soon emerged of precisely how much the laity (and clergy) were required to know. The influential Synodal de l'Ouest (1216 x 1224) stressed that the laity must be warned not to "search for proof of the articles of faith nor of the sacraments" because faith founded on reason had no merit, yet laypersons were nonetheless required to "believe firmly and without hesitation all that the Catholic faith affirms, even if they do not understand it" (4). Did this mean, then, that "although knowledge and belief were required of them, lay people in northern France were not obliged, or even encouraged, to seek doctrinal understanding" (4)?

Synodal decrees were often repeated precisely because implementation was difficult or a problem persisted. Evidence from surviving unpublished sermons delivered and recorded shortly before and after the Fourth Lateran in northern France by the very generation of masters associated with Innocent III suggests that this "rule" was often broken in practice. Faced with the specter of heresy, preachers indulged in the sophisticated explanation of transubstantiation, the Trinity, the Incarnation, and resurrected bodies before lay audiences even while repeating warnings identical to those described above. Very quickly, particularly in England, Paris-educated bishops included in or appended to their synodal statutes sophisticated discussions of the articles of the faith, the seven sins, the sacraments, and treatises on penance. Some of the earliest were by Alexander Stavensby, who knew of the presumed dangers of heresy firsthand, having served a stint as theology master for Fulk, bishop of Toulouse's clergymen and the early Dominicans.

Andrew Reeves rightly explores the question of how much and what secular priests (as opposed to canons or friars) actually preached to the laity after 1215 in England. Pointing to the burst of synodal and conciliar legislation and pastoralia initiated by university-educated bishops (including Stavensby), he uncovers striking manuscript evidence that some parish priests not only copied these statutes, but also possessed and used sermons (including those of Maurice de Sully), preaching manuals, bestiaries, and exempla collections. He suggests that more laypersons than once thought were probably exposed to university-style sermons which explained complex doctrines through striking metaphors, often at predictable points in the liturgical year (Christmas, Easter, Trinity Sunday, All Souls).

Further papers examine specific writers or episodes during Lateran IV itself. Peter Jones depicts Lateran IV's stress on preaching as confirming and enlarging a wave of sermonizers whose use of personal example and words included comedy and satire intended to shame sinners and promote good morals, thereby paving the way for the religious fabliaux and comic drama of the later thirteenth century.

While the Franciscan order used "anarchic comic spectacle" and acts of "surprising ridicule" to encourage others to "mimic the comic abjection of humanity", Innocent III and the reforming circle he inhabited also made devastating use of humor as a "moralizing rhetorical device" intended to cause others to reevaluate and police themselves and the world (as evidenced in the De miseria and Gemma ecclesiastica) and as a "tactic of exerting power in court politics" (100). Guillaume le clerc, married and in minor orders, likewise drew on the De miseria and Lateran IV for his Besant de Dieu (c. 1227) and Treis moz (c. 1228), intended to convert laypersons and attract the patronage of the reformer Alexander Stavensby. Guillaume's usage of reforming themes (contemptus mundi, savage critiques of vice, internecine war, crusading failure), stress on penance and adaptation of a widely-circulated unicorn fable echo contemporary anonymous sermons delivered in Paris; it is little wonder that his poems were soon copied into miscellanies containing pastoralia and sermons (145-69).

Carol Sweetenham explores another example of Lateran IV's influence in the Canso de la Crozada, where an anonymous continuator deliberately copied and then systematically undermined Guilhem of Tudela's presentation of the anti-heretical crusade. The Fourth Lateran Council served as a dialogic "pivot" (143), where the image of just crusade lovingly crafted by Guilhem through allusions to epic conventions and heroes (from the chansons de croisade and chansons de geste) and crusading topoi such as martyrdom and pilgrimage was (re)introduced and subverted partly through speeches inserted into the mouths of various actors (124-44).

It is hard to convey the sheer amount of work and expertise evidenced by essays which span various languages, disciplines, and manuscripts, making this volume well-suited for upper level undergraduates taking courses in literature and/or social and religious history as well as graduate students and researchers looking for cutting-edge research methods applicable to multiple fields. The essays by Boulton and Reeves will almost certainly become required citations for those working on pastoralia. The innovative hybridization of print and on-line editorial work by Daron Burrows likewise suggests intriguing possibilities for doing in the digital realm what one cannot affordably or for technical reasons do in print, including side-by-side color illustrations from different Apocalypse manuscripts and transcriptions and paleographic descriptions intended for classroom use.