Steele Brand: Killing for the Republic 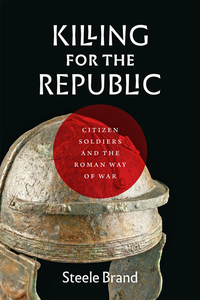 This is not a book for Europeans, or for scholars of any stripe. It attempts to use the military history of the Roman Republic to make a peculiarly American political point: to deplore the professionalization of today's US armed forces, and to call for a return to the "citizen-soldier," who is mostly citizen and only occasionally soldier. The controversy in which this book participates goes back to before the American Revolution (and draws upon even older British suspicions of standing armies) and has reemerged periodically through the history of the American Republic. Today it takes both left- and right-wing forms: the Left argues that if military service were more widespread socially, the US ruling class - whose children rarely serve - would be less eager to get into wars lest they place their own, rather than lesser men's, children in peril; this argument often evolves into rueful calls for a return to conscription, not only so that the political class would suffer the consequences of their decisions in their own families, but also because service by all would presumably encourage egalitarianism in society more broadly. The Right, on the other hand - and we associate this view especially with Classicist-turned-political-commentator Victor Davis Hanson - argues that citizen-soldiers with agrarian backgrounds are, by virtue of their upbringing and farming experience, both better citizens and better soldiers (which is another view that was prominent in the very earliest days of the US Republic). The US, and not Rome, is what this book is really about. And the anger of its author, the splendidly named Steele Brand, at the state of affairs in today's US armed forces, can sometimes get the better of him: "Most praise the soldier as defending our freedom, which counts for nearly anything these days - including vaporizing those ever-threatening mule-herders of the Hindu Kush with $65,000 automated missiles" (20).

Killing for the Republic begins with a slightly alarming discussion of the superlative merits of Rome, the "finest ancient Republic" possessed of "the singular genius of Rome's republican spirit, which earned it the right to dominate the Mediterranean" (x). Then we read praises of the agrarian citizen-soldier from both ancient authors and the writings of the Founders of the American Republic (xi, 9-13, 25-41, 52-56). The professional classicist will be quite surprised to discover that these utterances are not taken as evidence of an agrarian ideology, but simply as true.

The remainder of Killing for the Republic is a potted Roman military history from earliest times through the battle of Philippi, with stops at highlights such as the battles of Sentinum, New Carthage, and Pydna. This account is mostly without error, but it is also mostly without originality. The treatment of sources for early Rome will strike scholars as naive (Brand believes more of the early stories about Rome than is conventional among modern students), and Brand is also apt to believe that speeches in the historians reflect speeches actually given (159-160, 291-292). The maps of battles, as usual with such maps, are mostly products of the imagination. The bibliography in English is relatively conscientious, but rather too much reliance is placed upon books by amateurs (or popular books by professionals) and I find in the notes reference to only a single work not written in English (H. Botermann, Die Soldaten und die römische Politik in der Zeit von Caesars Tod bis zur Begründung des Zweiten Triumvirats [1968], at 354 n. 62; 355 n. 3). Brand has no degrees in Classics or Ancient History and there is no clear evidence internal to the book that he commands Greek and Latin: the translations are taken from the Loeb Classical Library (xix). There is also a strange imbalance in the coverage: the account of two years (43-42 BC), the Mutina and Philippi campaigns, occupies more than a quarter of the entire narrative section of the volume.

Even so, there is much to like in the historical narrative. Brand realizes that the Roman army of the Republic took little centrally organized training (29-34, citing at 330 n. 17 P. Bannard, "Military Training," in W. M. Bloomer (ed.) A Companion to Ancient Education [2015] 483-495). He grasps that relations between Roman soldiers will have been characterized as much by competition as by solidarity (168-169, 180, 186). He insists that the Roman army of the Republic was not a reliable machine, but given to disobedience, mutiny, and generally getting its own way (213-214): the great captains of the "client armies" at the end of the Republic were often compelled by their soldiers, rather than the other way round (221, 235).

But Brand promises a book that "examines the relationship between the Republican spirit and the citizen-soldier [and] analyzes how this spirit motivated men on the battlefield" (xii). And this, the main argument of the book, is not made systematically in the long narrative section. It sometimes seems, indeed, that the book attempts to persuade by using the word "citizen-soldier" as many times as possible when discussing Roman victories, in the hope of creating in the reader an unconscious and psychological, rather than a logical and scholarly, connection between citizen-soldiers and Roman success (e.g., 155, 167, 170, 176). When a direct connection is drawn between the culture of citizen-soldiers and a specific historical event (e.g., 126, 139, 142-144, 162, 180) it develops that the qualities of "citizen soldier" have so expanded as to render the nexus nearly meaningless: "The Roman farmer was tough and brave enough to withstand the onslaught of the phalanx" (192). Or, "[d]escended from the nobiles, he [Scipio Aemilianus] had been trained to outshine his colleagues in Roman virtues, and the citizen-soldiers, aware of his talents, naturally conferred rank and honor on him" (204).

Because the book's argument is hardly attempted, it is difficult to evaluate. But I might leave the reader with the following questions. (1). If it was their nature as citizen-soldiers that gave Roman soldiers a systematic advantage over their enemies during the Republic, why did they defeat, in some cases with great ease, other armies consisting also of citizen-soldiers, such as most of the Greek-speakers they faced in southern Italy and metropolitan Greece (and see 183-184 for the Macedonians)? Is it not actually true that the Romans had the most difficulty with "professional" armies, such as those of Carthage, rather than citizen-soldier enemies? (2). The book accepts the argument of Arthur Eckstein that "[d]uring the time frame in which Rome rose to power, international state systems were declining or totally absent, and anarchy and lawlessness were at their peak. Law, justice, order, and peace were impossible to maintain in a Hobbesian world where every state was as militaristic as the next" (178-179). If all states existed in this same universe, would we not expect them rapidly to become similar in martial culture by peer-polity interaction? (Such is Eckstein's argument.) And, if so, how do the Romans maintain their military advantage for so long? (3). The Roman army of the empire was no longer made up of citizen-soldiers. It was a long-service, professional army. Was it less effective than the army of the Republic, as the argument of this book necessarily implies? (4). Has the particular usefulness of the "citizen soldier" in battle ever been anything but a popular myth even in US military history? Consider the self-defeating incompetence of citizen-soldiers in the US Civil War and the way the direction of that war came to be entrusted on both sides to professionals, officers educated at West Point (see W. W. Hsieh, West Pointers and the Civil War [2009]), even in the face of a deluge of romantic arguments about the virtue of the citizen-soldier, arguments strangely similar to those made in 2019 by the author of the present book.