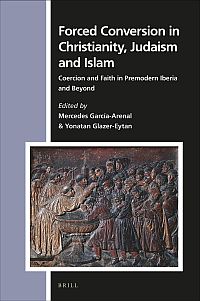 This book, coordinated by Mercedes Garc&#237a-Arenal and Yonatan Glazer-Eytan, examines forced conversion in Judaism, Christianity, and Islam, particularly but not exclusively on the Iberian Peninsula, a laboratory for interreligious dialogue. In this sense, some of the issues deeply addressed in this volume are the mechanisms of accommodation and new articulation of faith developed by the different religious traditions to deal with the realities of forced conversion; the new affirmation of foundational categories of religious identity; the role played by intention and compulsion; the production of legal and theological rationalizations to justify the use of coercion in conversion, or the appearance of tensions between external practice and inner beliefs. Moreover, this volume, through its different essays, demonstrate that these phenomena are attested in various religious traditions at different times and places.

Likewise, and trying to define how the concept of conversion is used in the book, especially as it is related to notions of will and compulsion, the editors state that the essays move away from attempting to determine whether conversion was the outcome of inner conviction or a pragmatic change in affiliation. Unlike, the aim of the volume is to historicize the very categories of will and compulsion, to study the process through which coercion was legitimized by a conception of faith and to analyze how conversion created broader identitary categories. In this sense, an explanation of the use of the concept of faith, and its implications at an individual and a collective level, is lacking.

On the other hand, the introduction to the volume is quite useful to contextualize its different essays. However, a more critical and detailed analysis is missing in some episodes, such as the voluntary martyrdoms of Cordova. It is also striking that the messianic and crusader ideology of the conquest of Granada (1492) is not related by the editors to previous crusader experiences, something that could be misunderstood as an exclusive Iberian development.

The first part of this book is dedicated to the reuses and remembrance of the Visigothic legislation, showing the complexity of the relationship between a historical precedent and later policies and events. Marmursztejn traces the complex history of the Visigoth legislation in the scholastic controversies over forced conversion in the thirteenth and fourteenth centuries. Rosa Vidal Doval analyzes how the rebels of Toledo (1449) drew on the Visigothic legislation as a precedent to advance their cause, which included barring New Christians of Jewish origin from government. Isabelle Poutrin analyzes the validity of baptism in sixteenth and seventeenth century canon law debates about the meaning of consent and coercion. Together, these three chapters show the complexity of the ever-changing relationship between a historical and legislative precedent, on the one hand, and later policies and events, on the other.

The second part of the book studies the forced conversion policies of the Almohads. Maribel Fierro states that the original reason for the forced conversion was the influence of both eschatological and Ismaili beliefs regarding the appearance of a Messianic figure who would bring about the disappearance of religions other than Islam. She also argues that the anxiety of the Almohad caliphs regarding the converts was related not only to the impossibility of knowing the true beliefs of those forced to convert but probably also to the fear of contamination by the original beliefs of the new believers. In his chapter, David Wasserstein outlines how the work of Ibn Hazm of Cordoba could have provided an intellectual background for the Almohad policies of forced conversion. It is difficult to understand the animosity that he shows towards Fierro's previous work, especially considering that he develops a hypothesis already proposed by the Spanish researcher. Alan Verskin offers a different perspective on the problem through discussing Jewish responses to the Almohad policy of forced conversion. He argues that Jews used the experience to rethink their ideas of Jewish-Muslim relations and perhaps even their theological understandings of Jewish suffering.

The third part of the book is dedicated to the problems related to the violent attacks on Jewish quarters that spread throughout Castile and Aragon around 1391. Ryan Szpiech questions the role attributed to the writings of Jewish convert Abner of Burgos, demonstrating the complex nature of Abner's statements on forced conversion. In Abner's view, forcing the Jews to convert would offer Jews a salvation that they do not deserve and also upset the natural order of God's salvific plan. In his essay, Ram Ben-Shalom explores the new language coined by Jewish authors, as one of the main tools for the production of identity, to react to, but also shape, the new and hybrid religious boundaries brought about by forced conversion. Glazer-Eytan analyses how the Inquisition was transforming religious ambiguities into heresies and how this process contributed to the production of the image of the New Christian as a relapsing Judaizer, a confessing subject created through coercive interrogatory techniques. Herzig examines cases from fifteenth-century Italy in which Jewish criminals converted to Christianity in order to have their death sentences commuted. Italian ruling elites supported efforts to convert Jews through coercive means as a way of bolstering the religious legitimacy of their rule.

The fourth and last part of this volume is dedicated to the link between theology and history in events of the fifteenth and sixteenth centuries. Scotto challenges earlier views that anachronistically depict Hernando de Talavera as a tolerant man, showing how Talavera's theological and pastoral thinking on the issues of coercion and will was more complicated. Marcocci studies the intense conflict and overlapping of memories, between New Christians and the rest of the society, caused by the policies of forced conversion against the Portuguese Jews in 1497. Garc&#237a-Arenal focuses on the issue of the forced conversion of Morisco children, the increasing tendency to link religion to lineage and to a biological aspect to transmitting faith -and the role of Virgin Mary, "La Inmaculada", in the development of this idea-, and how this process challenged the power of baptism.</p> <p>In sum, this volume is an important contribution not only for the analysis of conversion but for the study of the history of religion and how religious identities are created and shaped. Moreover, and as David Nirenberg states in the "Epilogue", this book also speaks, in a broader sense, about the tension between the power of conversion, of approaching a new order, and the weight of history and habit. The only criticism that can be made is that, despite the volume's title, a certain comparative perspective between religions is lacking.</p> <p class="italic" style="text-align: right">Javier Albarrán Iruela</p> </div> </div> </div> <div id="page_footer"> <div class="ie6_font_size" id="separator"></div> <p>issn 1618-6168 / www.sehepunkte.de <img height="10" src="/images/sp10.jpg" width="10"> </p> </div> </div> </body> </html>