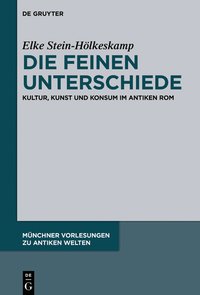 Elke Stein-Hölkeskamp gathers the fruits of two decades of research on elite consumption, display, and competition in the late Roman republic and early Imperial age. She explores diverse arenas in which elite Romans competed for prominence and distinction - arenas far removed from the struggles for high office and military preeminence that defined elite competition in an earlier era. "Competition" has emerged as a productive area of investigation among Germanophone historians; the collections Konkurrenz in der Geschichte (ed. R. Jessen, 2014) and Kultur des Wettbewerbs - Wettbewerb der Kulturen (eds. J. Starbatty et al., 2012) adumbrate the riches of this approach, which has not yet spread to the Anglosphere. Stein-Hölkeskamp's monograph is a welcome addition, as it provides a coherent, compelling statement of one approach to elite competition in ancient Rome, with a sharp focus on the novel or "nontraditional" areas.

Chapter 1, "Einleitung: Aristokratische Lebenswelten im Vergleich", presents the book's scope and theoretical underpinnings. Following a comparison of Greek and Roman elites in their respective cultural contexts, the author lays out a theoretical frame that includes Bourdieu's concept of "fields" within which social distinction may be pursued, and of "cultural capital" that can be gained in one field and exchanged for an advantageous position in another. It also includes Simmel's definition of "competition" as a form of mediated conflict, where antagonists do not contend directly for a prize they seek, but submit to the judgment of a third party - voters in elections, judges in court or in artistic contests, the views of friends, etc.

Chapter 2, "Einheit oder Vielfalt? Lebensziele und Lebensentwürfe der römischen Aristokratie im Wandel", surveys how early Imperial Roman elites sought out new fields, other than office holding and warfare, in which to pursue distinction. A case study of Silius Italicus, poet and consul, illustrates how literary activity begins to assume prestige rivaling that of office holding. For as competition in traditional fields was constrained by the princeps, elite attention turned to activities that had formerly been segregated into the devalued category of "leisure" (otium). Yet the impulse to turn away from traditional fields is not, she notes, entirely an imperial phenomenon: late Republican figures like Lucullus and Atticus were already doing this, and the impulse is visible in the poetry of Lucretius, Catullus, and Horace. [1]

In Chapter 3, "Epos oder Elegie? Die Dichtung als Weg zum ewigen Ruhm", the author further explores poetry as a field of elite competition and for pursuing distinction. Though the phenomenon had roots in the late Republic, it became widespread in the first century CE. Besides Silius she discusses the literary-cum-political careers of Servilius Nonianus, Arrius Antoninus, Mamercus Scaurus, Germanicus, the young Nero, Pomponius Secundus, and various individuals presented by Pliny the Younger as poets of note. The social practice of recitatio - the oral reading-out of a literary work-in-progress to an audience, from whom the reciter seeks constructive commentary and editing suggestions - emerges as a key venue for publicizing literary work and for gaining or losing reputation in this field.

Chapter 4, "Mars oder die Musen? Kunstsammler und Kunstkenner im republikanischen und kaiserzeitlichen Rom", considers luxury villas and townhouses, filled with fancy furniture, libraries, and prestigious works by famous Greek artists, as a field in which aristocrats competed for distinction and preeminence. Notable collectors included Varro, Lucullus, and Caesar from the late Republic, plus Asinius Pollio and the shadowy and/or fictional Trimalchio and Mamurra from the first century CE. The greatest interest circulated around objects produced by famous masters, of notable rarity or cost, or that had interesting genealogies. Such objects symbolized their owners' wide cultural horizons, showing that they possessed the resources and the knowledge of Greek culture to be conoisseurs of this material.

Chapter 5, "Toga oder Chlamys? Dresscodes und Habitus der spätrepublikanischen und kaiserzeitlichen Aristokraten", investigates the relationship between dress, bodily bearing, and social distinction. The "basic" garb of the Roman male aristocrat - the tunic and (all white) toga - is presented here as a sartorial baseline from which deviations, indicating degrees of distinction, can be measured. The discussion focuses on how dress articulates social distinctions (children vs. adults, women vs. men, citizens vs. non-citizens, senators vs. equestrians, magistrates vs. others) and distinctions of time or occasion (e.g., garb suitable for reclining to dine vs. for doing business in the forum). The author remarks on instances of individual style, or deviance from the norm, by which individuals sought to distinguish themselves, as well as developments in color, fabric, and drapery in the early imperial age.

The sixth and final chapter, "Luxus oder Dekadenz? Konsum und Konkurrenz beim römischen Gastmahl", considers dining practices and cuisine as fields of competition and distinction in the late Republic and early imperial age. Elite foodways and dining reflected the resources of the empire at the elite's disposal, as many ancient texts point out. Major culinary or stylistic innovators include Licinius Murena, Sergius Orata, and (again) Lucullus. Drawing now on Simmel's Philosophy of Money, the author analyzes Roman culinary consumption in terms of desire, its satisfaction, and the gratification of overcoming difficulties in obtaining desired objects (an analysis equally applicable in chapter 4, on collecting). She also notes, with Simmel, the tendency for consumption to move from quantity to quality, as increased supply for a desired object may drive the most competitive consumers to seek alternative ways to achieve distinction. This theoretical point tidily rounds out the volume, as it describes the shifting arenas of aristocratic competition more broadly across the arc of the late Republic and early Empire. A competitive elite pursuing distinction is always seeking and devising new fields in which to compete, and new objects or activities to underpin its competition, as social and political change renders older fields or earlier configurations less fruitful for manufacturing distinction.

The author remarks (16, 48) that the "epigraphic habit" of the late Republican and early Imperial elite remained highly traditional and restricted, indicating only public office and military achievements - the activities of the sphere of negotium broadly speaking. The competitive fields analyzed in this book, so visible in contemporary literary texts and commanding so much elite attention, resided in the sphere of otium and are invisible epigraphically. It is thus instructive to compare this book with Richard Duncan-Jones's 2016 monograph Power and Privilege in Roman Society - a challenging study of traditional career information (offices, priesthoods, commands), derived largely from inscriptions, for the imperial elite. His work reveals patterns of success and distinction which would be fascinating, if difficult, to correlate with those Stein-Hölkeskamp analyzes. Ultimately, a general understanding of aristocratic competition and strategies for achieving distinction in this period will require such a synthesis.

[1] A valuable early study of this phenomenon is J. D. Minyard: Lucretius and the Late Republic, 1985.