Randall B. Smith: Aquinas, Bonaventure, and the Scholastic Culture of Medieval Paris 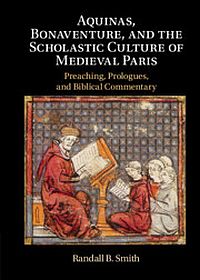 Traditionally, histories of the thirteenth-century university at Paris have highlighted the secular-mendicant controversy, the reception of the scientific works of Aristotle and their Arabic commentaries, and the growth of institutional forms and intellectual freedoms associated with modern universities (or challenges to these). However, one of the primary activities of students and masters was preaching, the direct result of a 'homiletic revolution' manifested in Lateran IV's decrees in support of regular preaching and clerical education, issued in reaction to the proliferation of heterodox and orthodox homilists seeking to meet lay audiences' demand for sermons. Echoing Ian Wei and David d'Avray, Smith notes that the mendicant orders became particularly adept at instructing friars in the use of homiletic tools and materials pioneered in Paris (34-5). However, because university statutes proclaimed preaching as central to the theology faculty's mission, Smith posits that perhaps the best way to understand how students and masters honed the demanding techniques of the sermo modernus is through analysing required inception sermons and written prologues which developed similarly scholastic 'habits of mind' (ch. 1).

Smith first exploits manuals on preaching to describe the sermo modernus form. A sermo modernus ideally began with a thema (biblical verse) separated into parts (divisiones) explicated by various forms of dilatatio (argument, imagery, chains of biblical authorities, exegesis) (ch. 2). After discussing sample inception sermons dating from roughly 1180 to 1245 CE (ch. 3), Smith evaluates the principium and resumptio addresses and other prologues written by Aquinas and Bonaventure (and their contemporaries) as an extended demonstration of how masters practised variations of the mental schemata fostered by the sermo modernus form (19). Such comparisons enable readers to see the evolution of the various elements of scholastic sermons and prologues (106-9) and the distinct ways in which scholars visualised relationships between various books of sacred scripture (124-6).

Smith tracks the development of Thomas Aquinas' prowess with the sermo modernus form from his prologues for scriptural commentaries to his prologue on the Sentences (129). He argues that by the thirteenth century, composing sermo-modernus-style prologues was a "socially established cooperative human activity". (147) Students would have turned to collections of sermons, preaching manuals, and previous inception sermons and commentary prologues for exemplars. Moreover, in Parisian pedagogy, lectio (lectures on the Bible and/or Peter Lombard's Sentences) and disputatio (disputation) were meant to contribute to and culminate in preaching (praedicatio). Despite this, the intimate relationship between biblical exegesis, disputation, and sermons has yet to be fully explored, although Smith begins to investigate the cross-fertilization of exegesis and preaching by illuminating Aquinas' lists of distinctions and notes for preaching found in the margins of autograph copies of his commentaries; both were intended to demonstrate to students how to convert the information found in other genres to preachable material (216-23). Aquinas' oeuvre therefore demonstrates how university culture supported and sustained preaching.

And yet, as Smith notes, despite sharing forms, genres, and 'habits of mind', Bonaventure and Aquinas nonetheless possessed radically different theological styles. In part three, Smith tracks the development of Bonaventure's signature 'poetic' style through inception sermons (chs. 10-11), a Sentences commentary (ch. 12), and scriptural commentaries that, like Aquinas', bear traces of conscious adaptation for the needs of students required to preach (chs. 13-15). Similar goals drove Bonaventure to provide basic theological teaching in the Breviloquium, although his modus operandi differed markedly from Aquinas' in the Summa theologica (345-7). Bonaventure's individualistic style in later life did not reject the 'language of the schools' and the prologue form but creatively adapted them for a series of public lectures (collations) delivered in an environment marked by crises (chs. 17-18). Smith's argument here could only have been strengthened by references to contemporary theological treatises intended for pastoral use also based on the seven gifts of the Holy Spirit (such as that of Stephen of Bourbon) and earlier scholastic hexamerons (for example, those of Anders Sunesen and Robert Grosseteste).

Smith's study therefore builds on a long scholarly tradition preoccupied with tracing the rise of interest in regular preaching in the later twelfth and thirteenth centuries, an interest manifested in many surviving sermon collections and genres of materials meant to assist preachers in the construction of sermons to be delivered to a booming and increasingly educated population. The University of Paris became one centre for homiletic production, as, by the mid-thirteenth century, were the mendicant orders, although secular Paris masters, Cistercians, and Augustinian canons had pioneered many of the tools later adapted and disseminated by the friars. As the premier institution for the education of western clergymen, Paris therefore played a crucial role in devising and popularising the sermo modernus style, which used a theme verse and associated divisions to help the preacher and his audience organise and remember the sermon's main messages.

As theology students, scholars spent years in biblical lectures devoted to parsing the various meanings of the scriptures and also had access to collections of distinctions, where topics or words were listed, sometimes in alphabetical order, for the easy construction and expansion of sermon divisions. [1] Paris was a preaching culture; the culmination of years of attending lectures (and sermons) and staging disputations on thorny topics was the mandatory translation of that material into preaching to popular and academic audiences. The construction of principia (introductory lectures praising the scriptures and mapping out the books of the Christian sacred scriptures) therefore served as one of many training exercises for theology students: introductions to a series of lectures on a book of the Bible; model prologues for the books of a required commentary on the Sentences of Peter Lombard; and as preparation for their own showcase disputations, an inaugural sermon (principium in aula) and demonstration introductory biblical lecture (resumptio); all rites of passage for would-be masters of theology.

Such continual practice formed 'habits of mind' manifested in a penchant for divisions and subdivisions; a sensitivity to multiplicities of meaning and the importance of context; the power of structure by association and of figurative language or a gripping story to convey meaning and assist retention. Masters nonetheless developed their own distinctive styles, ranging from Bonaventure's 'poeticism' to Aquinas' pedantic clarity. Thirteenth-century Paris therefore became a unique climate for forging new approaches to preaching, based partly on powerful existing traditions of preaching, on secular clerics who invented sermon forms and preaching aids, and on the advent of mendicant orders dedicated to preaching who created a system of regional schools (studia) to train those friars not sent to Paris. Smith concludes that the synergy provided by the lectio-disputato-predicatio model in thirteenth-century Paris fostered a golden age of scholastic preaching which he contrasts with the simple pietistic sermons or abstruse disputations of the fourteenth century (419).

This reviewer would argue that the translatability of methods and content from lectio and disputatio to predicatio rested on the predilection of the secular masters of Peter the Chanter's school and their associates in the canonical and Cistercian orders for developing new genres (including systematic commentaries, distinctions, and exempla) and the field of moral theology in the later twelfth- to mid-thirteenth centuries. Both proved directly pertinent to solving dilemmas facing pastors and lay audiences, including the problem of if and when to apply the subtleties of disputation to matters of the faith in preaching against heresy. Smith's work might therefore have benefitted from research being done on the sermons and academic works of two crucial generations before Aquinas and Bonaventure: the 'school' of Peter the Chanter and the parens scientiarum generation. For example, contrary to Smith's assertion that the Victorines were not early supporters of the 'scholastic' style being developed at Paris (422), many surviving manuscripts of sermon miscellanies and of preaching and scholastic tools developed by secular Paris masters such as Stephen Langton and Peter the Chanter come from Cistercian and Victorine libraries. Smith's book nonetheless makes an invaluable contribution to the study of mediaeval universities, the mendicant orders, and preaching and should inspire a new appreciation for the sermons of Aquinas and Bonaventure.