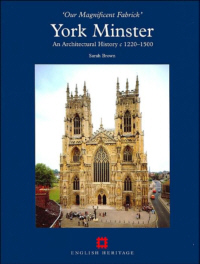 Sarah Brown's book brings to publication the work of the Royal Commission on Historic Monuments (England) in recording the structure and furnishings of York Minster over a thirty-year period. Research has therefore been undertaken by a variety of specialists and Sarah Brown has brought their results seamlessly together in this volume. Her role has clearly been more than that of an editor however, as careful reading of the footnotes reveals.

York Minster dates from the 13th -15th centuries but there has been a church dedicated to St Peter in York since the early 7th century. Documentary sources provide evidence of successive Anglo-Saxon rebuildings and in the post-Conquest period a stone church was built that underlies the current building. Its predecessors' site remains enigmatic and Brown summarises the evidence that points to the area north of the cathedral as a plausible site. The plan of Thomas of Bayeux I's late 11th-century church is discussed, as is the current state of knowledge about Roger of Pont L'Evêque's choir from the late 12th century. Being outside the scope of the volume, all this material is covered in a short prologue, and the book is then divided into five chapters that deal, in turn, with the transepts, the chapter house, the nave, the Lady Chapel, and the crossing tower and western choir. A final chapter examines the glass and furnishings installed between 1400-1500, with a detailed listing of the glass contained in an appendix. Other appendices list the Archbishops and Deans of York; the heraldry of the stone shields in the nave and choir arcade spandrels; there is the report on the dendrochronology of the chapter house roof, and a summary of the Minster's history from the Reformation to 2001. The book is illustrated throughout with black and white and colour photographs, as well as antiquarian and modern drawings, and there are no fewer than eight plans. Typographical errors are few, but Abbot Robert Waynfleet of Bardney, donor of a window, is confused with the more eminent William in the text (but not in the appendix), and the inscription has moved to window N23, and the south rose, that is illustrated with a colour plate, is inexplicably omitted from the appendix.

This book invites comparison with the chapters on the architectural history of York that were contributed by Eric Gee and John Harvey to G. E. Aylmer and R. Cant's A History of York Minster, published in 1977. It follows the earlier book in its chronological analysis of the fabric, new discoveries are added and there are new insights offered. Gee's sequence for the transepts is largely followed, for example, but the changes to the south façade are now related to an abandoned plan to vault the south arm in stone. There is some unevenness in the writing here that editing should have removed, for example in the discussion of the rose window and its visibility from the interior, but greater assurance is demonstrated in the remaining chapters, starting with the section on the chapter house.

A recent development has been the dating of the chapter house roof by dendrochronology to 1288, and this is used with the architectural evidence, and with a new dating of the heraldic glass to the same period, to establish the date of the building. A closer relationship between the vestibule and the new nave is also suggested. Throughout the book emphasis is placed on examining the decoration together with the architecture, considering it as an integral part of the new work in each phase of the building. This makes a vivid contrast with the earlier study in which the glass was the subject of a separate chapter and its contribution to the dating debate was not developed. The value of this approach is demonstrated by a meticulous analysis of the nave, using the heraldry on the shields in the spandrels and in the clerestory glass, to show that the walls rose to their full height by 1321. The complex archaeological analysis of the nave here identifies a building break in bay five of the nave aisle, from the east, with a detailed body of evidence marshalled to support it. There is no date for the break but the resumption of work is associated with Archbishop Melton's patronage after 1320. Design sources remain primarily French, but mediated through Cologne in the case of the exterior decoration of the nave and west front, and a German background is suggested for the unusual clerestory window tracery.

Re-evaluation of previous work in the light of new thinking includes a re-reading of the documentary evidence for the involvement of certain named masons. Thus the attribution of work to the Masters Simon and Hugh de Boudon is approached more cautiously than in the past, and Ivo de Raughton's contribution is associated with work on the St William shrine, and possibly the lost St Sepulchre's chapel, rather than with a range of curvilinear work throughout the region associated with Archbishop Melton (1316-1340). Similarly, the division of the east end phases between William Hoton the younger, master mason 1351-1369, and Robert Patrington, master mason 1369-c.1385, is reassessed, and the more overtly Perpendicular sections of the Lady Chapel given to Patrington.

Work on the east end of York is well-documented, with Archbishop Thoresby laying the foundation stone of the Lady Chapel in 1361 and completing the building by his death in 1373. Earlier, in 1349, Archbishop William de la Zouche had given funds for a chapel on the south side of the choir, which was incomplete at his death in 1352. The chapel lying across the end of the south-east transept has been known as the Zouche chapel since the late 17th century, and its siting used as evidence that the plans for the new east end were well-advanced by the late 1340s. In this new reading the chapel, and the two vestries to the west of it, are all identified as vestries for the new choir, from the 1390s, with the two western ones built on the foundations of their 12th-century predecessors. The site of the Zouche chapel thus remains unknown; it must have been demolished as an unfinished building.

John Harvey's sequence of construction for the Lady Chapel in three phases is challenged and a new phasing proposed, based on the horizontal levels of the structure. Brown places the design of the east window in the same phase as that of the clerestory windows and explains the difference in the tracery as attributable to the iconographic demands of the glazing programme. Delays and the collapse of the central tower impeded the construction of the western choir and it was not finished until about 1420. Again, heraldic evidence is used to provide surprisingly precise dating for the construction of the choir.

The crossing tower's fall resulted in a complex reworking of both of the transept arcades, with the east sides already modified to accommodate the wider aisles of the new choir. After 1407 more work was done on the arcades to ensure the stability of the crossing. It is here that the chronological layout of the book is less successful and the reader is left turning back the pages to see what had been attributed to the pre-collapse period while following the sequence of the repair work.

The large number of illustrations may entice the general reader, but sentences like, "what appears to be brattishing on this transom is, in fact, the sculpted ends of the trabeations that link the outer skin to the mullions of the clerestory" (145), reveal that this is a book for architectural historians of a serious intent. In its detailed descriptions and analysis of the sequence of construction at York between the 13th and 16th centuries it far surpasses previous studies of the building and provides an enduring work on one of the most important English medieval buildings. The new readings in some cases reinforce previously held views, but some ideas from the past, such as relating the work of Minster masons to projects at other places on the basis of their masons' marks are, thankfully, quietly consigned to obscurity.