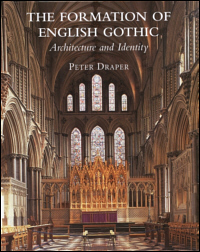 The Formation of Gothic is by a leading scholar of architecture and liturgy and its publication represents the culmination of its author's work as he retires from full-time teaching and research. Books that provide an overview of the Decorated and Perpendicular styles in England were published in the last quarter of the twentieth century, but surprisingly this is the first book to deal with the themes of the Early Gothic period. The main topic is an examination of the architecture of the period within the context of the uses of the buildings and against the cultural background of a developing nationalism. The period under consideration is 1150 to 1250, but the book concentrates on the work started after the 1174 fire at Canterbury, including a brief look at the historiography of English Early Gothic. Draper summarises his earlier thoughts on the changes to the Trinity chapel at Canterbury, and emphasises the patron's role in the choice of expensive materials and in the form of the architecture. Patronage is an important theme for the book, it features in the titles of two chapters and is central to a third one, although the difficulties of finding the evidence for the patronage of the smaller buildings prevent easy conclusions, and in the case of the larger ones, of establishing causal links between patrons and what they built. As Draper notes, local building traditions and the backgrounds of the masons seem to have been more important than the variety of buildings seen by the clerics and nobility.

In order to provide a frame for the discussion a certain amount of architectural history has to be laid out and the chapters three 'Transformation: 'Evolution or Revolution?' and four, 'Regional Variations', provide a clear overview of the architectural developments of the period and the current state of debate. The detailed discussion of the monuments draws on Draper's own published work of the last thirty years, and on that of others, supported by an extensive bibliography featuring nearly all the volumes of the British Archaeological Association conference transactions, the place in which much of the current literature on the cathedrals has been published.

The chapter on Lincoln reveals Draper's thoughts on one of the most intractable structures of the late twelfth century, the choir built for Bishop Hugh. Although the orthodox route of acknowledging Canterbury's influence on Lincoln is followed, there is much here that is new, such as the suggestion that the asymmetry of the high vault was to allow the clerestory to have an uninterrupted set of three windows in each bay. Draper wisely resists the challenge to offer another interpretation of the Lincoln chevet, pointing out the inadequacies of the reported excavation, and in particular the difficulty of establishing the sites of the piers leading into the east chapel. The role of the choir in providing a source for the later thirteenth-century work is a valuable part of this chapter, and it might have been interesting to have considered the role of Northwold's work at Ely in providing a link between the Lincoln nave and Angel Choir at this point. The vault experiments in the nave and its west chapels are commented upon, but the change in plan that the south chapel represents is not mentioned, although the slender pier that would have supported a set of four quadripartite vaults, to match those on the north, can still be seen in the south chapel. It is partly attached to the west wall and employed as a respond although it is carved in the round.

Lincoln's influence on a wide range of buildings is acknowledged, both positive and negative, with Salisbury seen as a reaction to the elaboration of Lincoln, having a 'chaste clarity of design' (160). Worcester is claimed as the 'most representative example of English Gothic in this period' (ibid.), with Engel's new reading of the east end followed. Here for the first time we get a suggestion of 'independent invention', in which masons arrive at the same conclusions independently (164), in a period of stabilisation after the varied experiments of the second half of the twelfth century.

For Draper's speciality one turns to the chapters that deal with the area most closely associated with him, those that cover the influence of liturgy. Responding to the lack of coverage of the topic in the general literature, the author starts with a description of the events of the Mass, an experience involving all the senses that emphasises the theatre of the church. The chapter effectively summarises the different liturgical arrangements of parish and major churches, and acknowledges that architecture was not driven by the needs of particular liturgies although some of these have left their marks on the buildings in the form of alterations. Instead liturgy gave meaning to the buildings and indeed there is a strange and palpable absence in churches where the state has taken control and no religious function is served.

The notion of 'decorum', defined as the connection between the building and its uses, and the ways in which the architecture reflects those uses, is continued to include secular buildings. Bishops' palaces are briefly mentioned, a group of buildings insufficiently considered by architectural historians, especially by those on the two sides of the castles debate. The use of wood roofs for even the grandest halls, whereas castle chapels were mostly stone vaulted, and the rarity of stone vaults in parish churches, demonstrate the concept of 'decorum' very well.

The final chapter tackles the question of the national identity of English Early Gothic and asks why it should differ so markedly from the Gothic of France when political links between the two countries were so strong. For Draper the rejection of French ideas can be connected to a growing sense of national identity found in literature, language and theology that was emerging in the late twelfth and thirteenth centuries. The very selective use of French architectural innovations had to be integrated with the Anglo-Norman building traditions, such as the clerestory wall passage, since these manifested cultural and regional identity.

It remains to be asked, what is the target audience for this book? In keeping with other books that Yale has published with the Paul Mellon Centre for Studies in British Art in the recent past, it is an attractive book with high-quality colour and black and white images, many reproduced at a large scale, and most chapters open with a beautiful full-page colour photograph. The production of the book is good, but the copy-editing has been less so and there are a number of mis-sited counties, incorrect picture captions, and note 43 on page 94 seems to have gone astray. There are some plans, nearly all from the nineteenth century, one moulding diagram, and a few reconstruction drawings, nearly all of them familiar. Is this then a book intended for the general reader? There is plenty here for a non-specialist, Draper's writing style is clear and accessible with a glossary of technical terms at the back, and there is also sufficient detail for students to find the book useful. But the author reaches further to address issues of current debate amongst architectural historians. His intention is to examine certain important buildings 'in terms that would have made sense in the twelfth and thirteenth centuries' (11), that is, within their social and political contexts, and to analyse the changes in the architectural vocabulary in the light of the expectations of patrons and masons. It is this last point that creates the tensions in the book since we can only infer from what we have, which is the buildings themselves, to seek an understanding of motives for building in particular ways. Perhaps we expect too much understanding of what was new and exciting in architecture by medieval patrons: It may have been a desire for evidence of their power, wealth or sophistication that they wished to display, rather than technical knowledge. In the case of masons, as Draper notes, regional traditions predominated and new ideas had to be mediated through workshop, or quarry traditions, and these rooted buildings firmly in their own areas. Perhaps the concept of a national character in English architecture is not one that a medieval mason would have recognised. Questions of patronage and of a national style raised here will continue to be discussed by future generations of architectural historians, aided by Draper's perceptive analysis.