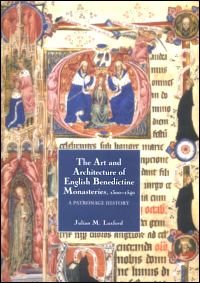 Patronage is a topic much in evidence in recent studies. There has been a rise of interest in finding out who commissioned the building, stained glass, metalwork, woodwork or other costly ornaments that formed the trappings of medieval religion. This book takes a different stance. By examining the total patronage received by a single group, the Benedictines, rather than concentrating just on the donations of the wealthy Julian Luxford has taken on the task of drawing common threads from material emanating from a very diffuse and disparate group of people. His patrons range from the king and higher nobility through the gentry and mercantile class, and, as he stresses, the list should include the monastic communities themselves, acting both collectively and individually. Luxford's work is a behavioural study as much as an art-historical one, interrogating documents and works of art for evidence of intent and to discover the motives behind patronage. Books and manuscripts owned by the Benedictines are scoured for dedicatory inscriptions or other evidence to reveal the donor, yielding treasures like the name of the monk John Drayton beneath the single illustration in the book that he gave to Winchester (105 f.). Drayton's name is writ large, in both senses; the book was commissioned by him for the use of the house, and also to gain the individual commemoration of himself, distinct from the collective intercession for the entire community. Luxford's approach is new, the range of material presented here is large and varied, and he displays much ingenuity in extracting the information he wants from the types of documents, whether written texts, or the buildings themselves.

The book has it origins in Luxford's PhD thesis, retaining its emphasis on the West Country although the title conceals this. As a regional study, which extends the definition of the West Country to include Herefordshire and Worcestershire as well as Gloucestershire and Hampshire, it allows the author to include houses less-well studied but with adequate documentary evidence to explore. The choice of the Benedictine order requires the author to make distinctions and to discuss whether patronage in this case was distinctive, and it gives him the chance to study the art and architecture of Tewkesbury, Worcester and Glastonbury, inter alia. In reworking a dissertation into a more readily accessible book care has been taken to introduce a less-formal writing style but this has not been done uniformly and occasionally the language of the examination-text still remains. Latin is infrequently translated for example and the term "forinsec architecture" (19) may bemuse the less-specialised reader. The layout is conventional, an introductory chapter to discuss the documentary record and introduce the range of material remains of Benedictine art and architecture (in only 24 pages), followed by two longer sections that consider patronage, first as an internal force and then from external bodies. Two appendices provide a brief listing of all the Benedictine houses in the region, drawn largely from Knowles and Hadcock, and two extracts from Evesham Abbey documents. These extracts provide a warning about over-attributing works of patronage to abbots, a thread that runs through the book, with Luxford keen to restore to the wider community the credit for works traditionally ascribed to abbots. Indeed, evidence is marshalled to show that 'internal' patronage existed not only at the level of the abbot, it also applied to priors and obedientiaries and even to humble choir monks, and nuns.

Architectural patronage remained a joint activity. But items such as costly and elaborate vestments were more likely to be the donation of the superior, from his personal wealth, whereas the sacrist was charged with providing the everyday versions from the funds of his office. Distinctions are drawn between things bought for the community, which could be justified as honouring the Almighty, and things bought for personal use which Luxford terms "unofficial" patronage (82). It is clear that enclosed religious were in contact with the outside world and had the means to buy, or commission, art even if it was not always of the highest quality. Metalwork was highly valued by the Benedictines, items such as abbots' crosiers, or embellishments to shrines, like that of Dunstan at Glastonbury given plate and ornaments by three successive abbots. While Luxford is doubtless right to claim that precious metals were "perhaps the principal aesthetic leitmotifs of the later medieval Benedictine church" (77f.), it is an over interpretation to read Leland's comment, that refers to the small-scale gilded shaft rings used to attach the Purbeck marble shafts to the piers at Worcester, as evidence that the piers were partly gilded (78).

Patronage by seculars is described as being a relatively minor aspect of the relationship between the cloister and the wider world. Patrons were expected to maintain the economic conditions in which the convents flourished rather than be direct sources of help in the upkeep of buildings or provision of service books. The times were not propitious for the Benedictines; there were many alternative sites for patronage. Parish churches had become the chosen burial site for the nobility; competition existed with the Mendicants and other Orders in the region, and there was the question of rivalry with pilgrimage sites. Luxford coins a term for the Benedictine response to these pressures, "cleverness" (119-23), marshalling integrity and ingenuity in the face of such problems.

There was also a decrease in royal interest in the period, with the notable exceptions of Glastonbury, where there were royal gifts in 1331, and Gloucester. There the absence of any reference to royal patronage in the monastic chronicles in the period after 1327 is noted, but the overwhelming visual evidence of the building and of the tomb of Edward II still point conclusively to royal involvement, even if this entailed the use of royal masons rather than royal funding. Luxford is equally concerned with the complete absence of royal documentation for Arthur's chantry chapel at Worcester, but he reluctantly accepts it as a case of royal patronage.

For the nobility Tewkesbury presents the best example to study, acting as mausoleum for the Clares, Despencers and Beauchamps. The role of the patron is balanced against the wealth of the house, the monks had the means to finance their own building. The wishes of the patrons, in terms of monuments, were weighed against those of the monks. The tombs are well documented, with the drawings in the Founders' Book, dated here to c.1500 - 10 (26), rather than the mid 15th-century, based on the fragmentary figures of Isabella Despencer's ancestors that originally stood in niches on her tomb. The architecture has no such documentary support and the remodelling of the choir, which was to be the site of the patrons' monuments, is presented here as the work of the monks. For the 'sub-nobility' the motives for patronage were similar, but with the additional feature of familial connection with members of the community, or of confraternity.

Luxford's book provides much new material to consider and by taking the concept of patronage as a motivation, he has found ways of approaching the subject unrealised in previous studies. This is surely a model to emulate.