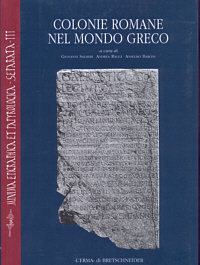 This volume substantially reproduces the papers presented to a conference on Roman colonies in the Greek world, which was held at Pisa in November 2000. It can be read as a supplement to the three major synthetic treatments which have laid the ground work for this subject. [1] Many of the papers stress legal aspects of the evidence, reflecting long standing interests in the Pisa department of ancient history.

Anselmo Baroni (9-54) contributes a substantial paper on the famous edict of L. Antistius Rusticus, which was issued to deal with famine conditions at Pisidian Antioch under Domitian (AÉ 1925, 126). He argues that the legate's assertion sciat me, quidquid contra edictum meum retentum fuerit, in commissum vindicaturum, should be understood to mean that grain which was not declared for sale in accordance with the provisions of the edict, would be confiscated and treated as bona commissa, that is goods no longer regarded as part of their owner's possessions, a condition comparable to that of goods which had not been declared for customs' duty. Thus a governor who intervened in the business of a Roman citizen colony drew upon a technicality of Roman private law in formulating his edict. The strict legalism of Rusticus' action may be compared with scruples of Pliny about inspecting the financial accounts of the colony of Apamea in Bithynia, which had the right to administer its own affairs without a governor's intervention (Pliny, ep. 10. 47 f.).

Two papers convincingly correct previous misconceptions or misunderstandings. Umberto Laffi demonstrates that there is no sound reason to believe that the colony of Alexandria Troas, which bore the title Colonia Augusta Troas under the empire, had previously been a Caesarian foundation (151-164). Edward Dabrowa argues that since third century coin issues of several Syrian cities (Rhesaina, Caesarea ad Libanum, Tyre, Sidon, and Damascus, as well as Tyana in Cappadocia) carry representations of the vexilla of specific legions, these cities must have received genuine veteran settlements, and were not mere 'titular' or 'honorific' colonies (211-231). It is worth remembering that while the distinction of being a colony remained important at this date, the distinction of being a colonist was less so, in that after 212 the great majority of the inhabitants of the empire had acquired citizen status.

Another pair of papers is concerned with questions about Roman citizenship. Andrea Raggi offers an admirably clear discussion of the relationship between colonial and Roman citizenship, concluding that the former was never possible without possession of the latter, and that an imperial citizenship grant was always a prerequisite before a peregrinus could be made a citizen member of a Roman colony (55-68). The general analysis of the juridical and epigraphic evidence (mainly from the western provinces) leads to a lucid account of the locus classicus for this problem, Dio Chrysostom 41. 4-6, concerning the citizen status of his mother and maternal grandfather, who must have been granted Roman citizenship by Claudius or Nero, before they were made citizens of the colony of Apamea and of his father, who was born a peregrinus, and must have become a civic Romanus before he was also made a member of the Apamean colony. Domitilla Campanile leaves the colonial context to discuss the methodological problems of tracing the spread of Roman citizenship in the province of Asia before the constitutio Antoniniana (165-185). She argues that the obstacles to accurate quantification are virtually insuperable, but makes the important point that Roman citizenship grants were rare even in the time of Augustus. The colonies founded stand out all the more for creating substantial reservoirs of Roman citizen populations at this period. The methodological pessimism of this paper seems somewhat exaggerated. From many cities of Asia, including Ephesus, we have extensive documentation from definable social groups in the form of lists of names, or coherent series of inscriptions, some of which are also well dated. By comparing earlier and later evidence groups of this type, it should be possible to measure the progress of Roman citizenship, at least when this is signaled by the use of the tria nomina.

Athanasios Rizakis reviews the evidence of the gromatici for colonial foundations. This paper would have benefited if more of these texts had been presented in extenso. It is not so much a specialized study of their evidence, as a consideration of the general political and social circumstances under which colonies were created (69-94). Rizakis is surely right to conclude that these could differ widely from case to case. One topic not discussed here that might reward attention is the relationship between the size of a colony's territory and the status of the original settlement in its local context. There was surely a radical difference between the Roman colony at Bithynian Apamea, with its limited territory, and those at Pontic Heraclea and Sinope, two ancient cities with enormous territories. Significantly Strabo observes in the latter cases that the colonies only occupied a part of these (12.3.6; 12.3.11). Rizakis follows the traditional view that the locations of at least some of the eastern colonies may have been chosen with a view to securing regions under Roman control. This is contested in Cédric Brélaz's paper, who concludes that the colonies in Asia Minor "n'ont pas de vocation militaire" (187-209). This conclusion of course rests to some degree on the definition of the terms vocation militaire. In effect all the inhabitants of the empire had a general obligation to protect the interests of the emperors, by force if necessary - that is at least if we take the terms of the oaths of allegiance sworn to Augustus and his successors literally. While there is little evidence to show that such obligations were any more than a formality in the first two centuries AD, this was far from the case from the Severan period onwards, when the colonies, as well as the other cities of the eastern provinces were literal members of a great symmachia against Rome's enemies. [2]

M. Baldwin-Bowsky and Kalle Korhonen provide case studies based on the epigraphy of two specific colonies, respectively Cnossus (95-150) and Catania (233-253). The question of the choice of language used in the inscriptions is a major theme of both papers. Bowsky argues that the use of Latin at Cnossus had virtually disappeared by the second century, and that the only later evidence is for the limited use of the two languages in public, written contexts. The situation at Catania, in contrast, provides evidence for a genuine symbiosis of the two languages, illustrated by the linguistic congruence of funerary formulae in Latin and Greek, and the fact that both Greek syntax and orthography were influenced by Latinisms. The broader issues of the Greek linguistic and literary culture of the Sicily are the subject of Giovanni Salmeri's discursive final essay in the volume, which has relatively little to say about the specific subject of Roman colonization (255-308). The theme is picked up by Maurice Sartre, who argues in his concluding essay that the use of Greek in Catania and elsewhere in second century Sicily has little do with colonization but should be connected, as Salmeri demonstrates, with the wider phenomenon of the place of Greek culture in the Roman empire (309-319).