Rinse Willet: The Geography of Urbanism in Roman Asia Minor 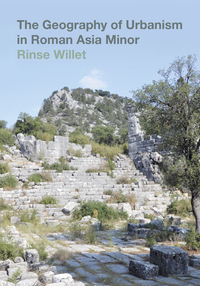 This is an ambitious study. The introductory chapter - 'Towards defining cities' - proposes to treat 'juridical status, city size and function as three windows on the cities of Roman Asia Minor'. Chapter 2, after a nod to prehistory, charts the emergence of the Roman urban pattern from its classical and Hellenistic origins. Chapter 3 takes juridical status as the main criterion for identifying 'self-governing cities' and presents ancient evidence and modern estimates for how many there were in each province and for their distribution density. Chapter 4, which places the emphasis on their function rather than formal status, deals mainly with 'secondary agglomerations', substantial settlements with city-like features which operated as locations of regional economic exchange. Chapter 5 applies techniques of mathematical modelling to identify a size hierarchy for cities. Chapter 6 is less abstract and concentrates on the significance of monumental building in cities, combining evidence from both archaeological and textual evidence. A short epilogue raises further issues, including climate change as an explanatory factor for changing patterns of settlement. The book's title gives pride of place to geography, but strictly geographical factors are heavily emphasized only in chapter 4 which deals with cities and their territories, with a focus on land-use, climate, agricultural productivity and settlement distribution. Although the underlying arguments are based on a high level of generalization, the narrative is packed with specific information extracted from inscriptions and texts, sometimes simply anecdotes, and very detailed observations from individual archaeological surveys. There are many tables and carefully prepared maps, reproduced at too small a scale for comfortable use. A mass of primary information is squeezed into an appendix on settlement data arranged alphabetically by place names within the various regions. The detail and the diversity of the information in this appendix is a measure of the challenge facing the researcher aiming to produce a digestible and persuasive historical and geographical analysis.

Many of the themes explored in the book can be found in a classic but now little read paper written more than fifty years ago by Norman Pounds, "The urbanization of the classical world" and it is no coincidence that Pounds precisely excluded Asia Minor and the rest of the Roman East from his study with the observation that 'too little is known of the cities of the eastern provinces for estimates of their size and interrelationships to be possible.' Willet steps into the breach with heroic attempts to supply these deficiencies. However, despite the progress made by classical archaeologists, the satellite observations of Google Earth, and the application of statistical formulae to extract sense from large data sets, there are still enormous uncertainties regarding the basic information with which Willet works: settlement size and chronology; the actual nature of each urban settlement; the extent of similarities and differences between each city or settlement and its peers. Intensive research over the last thirty years in some parts of Asia Minor, including the densely settled and comparatively well-documented western parts of the province of Asia, and the south-west regions of Lycia, Pisidia and Pamphylia, has begun to fill important gaps in our knowledge, but other regions including Phrygia, Bithynia, Pontus and Cappadocia are so thinly urbanized and archaeologically under-explored, that inter-regional comparison becomes heuristically hazardous.

In the concluding pages, Willet, wisely enough, does not offer conclusions to his comprehensive synthesis, or attempt to supply overarching hypotheses to explain Roman urbanization. The approach of this book is welcome, but it is still work in progress. The scope of Pounds' article challenges scholars to come up with explanations of Roman urbanization on a vast regional or empire-wide scale. In the case of Asia Minor, the doctrine of 'less is more' may be good counsel, and some of the methods of quantification and comparison used in this study are likely to yield securer results when applied to a more homogeneous body of data on a more restricted regional basis, e.g. to Pisidia, Ionia or the Maeander valley, than across the entire historical and geographical landscape from the Aegean to the Euphrates.