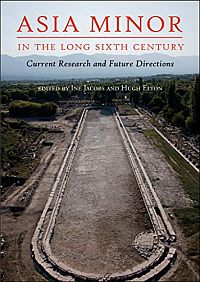 The origin of this collection of papers was a workshop held in Oxford in December 2016. It is dedicated to one of the co-organisers, the late Mark Whittow, a moving spirit in a new generation of British Byzantinists, who was tragically killed in a car accident a year later. Whittow's own presentation on environment, climate change and settlement was not available for publication, but the original nine contributions to the workshop have been expanded to thirteen, including a short survey of Constantinople (Jim Crow), substantial complementary papers on western and southern Asia Minor (respectively by Hugh Jeffreys and Angela Commito), on rural settlement around Sinope on the Black Sea coast (Owen Doonan), and a comparative approach to regional economic indicators in Lycia, Isauria-Cilicia and the northern region of Honorias and Paphlagonia (Kristina Terpoy). The papers presented at the workshop itself include a wide ranging approach to rural settlements in southern Asia Minor (Hugh Elton), detailed, largely site-specific studies of housing and pagan statuary at Sagalassus (respectively by Inge Uytterhoven and Ine Jacobs), reports and analysis of the results of recent excavations at Assos (Beate Böhlendorf-Arslan) and Aphrodisias (Andrew Wilson), and a sally to north-eastern Anatolia, the barely studied hinterland of Trabzon occupied by Rome's ambiguous tribal neighbours, the Tzani (Emanuele Intagliata). All these papers depend principally on archaeological material, obtained by survey and excavation, seasoned by occasional epigraphic discoveries. The exception is a well-informed paper on sixth century Asia Minor 'seen through the lens of hagiography' (Efthymios Rizos). This study and the discussion of pagan statuary by Ine Jacobs have been informed by two other important Oxford initiatives in the study of late antiquity, the digital data-bases devoted respectively to The Last Statues of Antiquity (http://laststatues.classics.ox.ac.uk)and The Cult of Saints in Late Antiquity (http://csla.history.ox.ac.uk). The editors have provided a short introduction, but regrettably no index.

The geographical coverage is extensive but not exhaustive. Central Asia Minor, including Phrygia, Galatia and Cappadocia, the upper Euphrates, upper Mesopotamia, and the entire region east of Antioch are not covered. This thereby excludes Asia Minor's war zones (today as well as in late antiquity). A direct consequence of this geographical choice is that, apart from Rizos' chapter, the book hardly engages with written evidence for the sixth century. As the editors comment (5), 'the urban centres of Asia Minor are hardly mentioned in the rich textual corpus of the period'. Procopius above all, and many other writers, provide abundant contextualised information about the corresponding cities of the northern Near East, but lie just beyond the book's geographical horizon.

The editors and most of the contributors are at pains to emphasize the significance of the "lively and prosperous long sixth century". A closer reading naturally shows a much more nuanced dissection of this generalisation. The definition of prosperity and similar terms is subjected to some examination, or at least given substance by the material examples cited. Most of the site-specific studies also identify important chronological distinctions within the long sixth century, defined as running from 491 (Anastasius' accession) to 641 (death of Heraclius). Careful analysis of excavated material is indispensable for this. Late Roman pottery chronologies are still mostly approximate, and it is only possible to make confident distinctions between ceramics produced at the start or end of this period when they are derived from dated stratigraphic contexts.

The shadow of decline and fall hangs over these essays, which can be read as a supplement to Wolfgang Liebeschuetz's, The Decline and Fall of the Roman City (2001). In this regard, the results from Sagalassus and Aphrodisias have a higher evidential value than anything else in this collection. Inge Uytterhoven's important paper on the housing at Sagalassus (9-28) shows that after the middle of the sixth century a large mansion with lavish representational features, was divided into smaller domestic units, working areas for small scale 'industrial' use, and animal stabling. She draws attention to similar changes in the mid-sixth century in at least parts of the housing areas at other urban sites: Hierapolis, Sardis, Ephesus. The notion, however, that the earlier elite occupants might have moved to the upper floors of these buildings seems implausible. Andrew Wilson presents convincing evidence for destruction by fire of four important areas of Aphrodisias by fire in the period 613-620 (197-221). The evidence presented in each of these papers fits relatively seamlessly into existing narratives about the sixth century: in the first case, that the great plague of 542 had (or could have had) a devastating impact on urban populations; in the second, that the Sassanian invasions led to extensive destruction and even the final collapse of Anatolian cities. The impact of both these events has been relativized or even denied in recent discussions. [1] The papers published here confirm that whatever judgements we make about settlement and prosperity in the long sixth century, matters were worse in the seventh, when the picture is much bleaker. We should nonetheless observe that Mark Whittow himself, in one of the last of his own papers to appear in print, offered some important reasons at least to pause before assuming a picture of outright collapse after the reign of Heraclius. [2] It is not difficult to imagine that this workshop generated lively discussions about issues and problems which are far from being resolved.