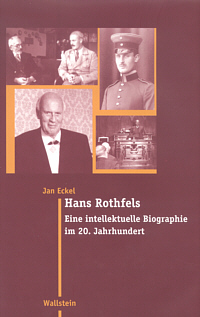 Jan Eckel's impressively researched and carefully argued book is an important contribution to the ongoing evaluation of the scholarship and career of Hans Rothfels. This subject has been the focus of an energetic and divisive debate in the past several years. [1] Eckel's work is the most thorough and detailed study of Rothfels to date. It is nevertheless doubtful that it will settle several arguments over Rothfels' life and legacy.

Eckel calls his book an "intellectual biography", and the emphasis is indeed on Rothfels the historian and teacher. Observations about Rothfels' private life and personality are included, but do not receive a great deal of emphasis, which might disappoint readers hoping to gain insight into Rothfels as a person. While Eckel persuasively demonstrates the connection between Rothfels' fanatical German patriotism and his sensibilities as an historian, the biographical and psychological bases of that patriotism remain obscure. To be sure, we should not be surprised by the patriotism of a converted Jew of the cultivated German upper-middle class who sacrificed a leg for his German Fatherland in World War I . But Rothfels' politics slid very, very far to the right in the early 1930's (precisely how far remains debatable), something that the intellectual history approach employed by Eckel can not satisfyingly explain. To be fair to Eckel, however, the psychological origins of Rothfels' behavior might well lie beyond the explanatory powers of the historian altogether.

Eckel's book is organized chronologically, dividing Rothfels' career into five periods: World War I and the post-war period (1914-1926); the Königsberg years (1926-1933); the National Socialist period (1933-1939); the period of Rothfels' emigration and remigration (1939-1951); and Rothfels' career in the Federal Republic (1951 through the 1970's). Sections devoted to each of these periods are subdivided into individual chapters dealing with issues such as "conditions of scientific production", historiography, and Rothfels' activities as an organizer of scholarly projects. A good deal of space is given over to a description of the intellectual and political developments in the German historical field more generally, which allows Eckel effectively to address the question of how typical or atypical of his profession Rothfels might have been. The inclusion of this broader context enables Eckel to provide an especially compelling explanation of how and why West German colleagues facilitated and celebrated the remigration of the conservative nationalist historian.

The question that has generated the most contentiousness in recent debates over Rothfels is that of his relationship to National Socialism. Eckel gingerly tiptoes his way through the existing minefield of conflicting interpretations. He concludes that there were indeed important areas of overlap between National Socialism and Rothfels' opinions on a range of domestic and foreign policy issues. On the other hand, Eckel emphasizes that Rothfels, despite his Germanic chauvinism, was not a racist, and he suggests that some of Rothfels' most vociferous detractors have overstated the degree to which his historical lectures and writings had actually been intended as political statements.

Eckel's apparent determination to steer a centrist course in the Rothfels debate is also evident in his analysis of Rothfels' reactions to the Nazis' political fortunes before 1933. In December 1930 Rothfels greeted the Nazi success in the Reichstag election of the previous September as a "happy event" ("freudiges Ereignis") (167). But in March 1932, as Eckel tells us, Rothfels wrote to his friend and confidante Siegfried A. Kaehler that he would not vote for Hitler in the upcoming presidential election (167, Fn. 29). Eckel, therefore, leaves the reader with the impression that Rothfels would not cross a certain line with regard to his flirtation with National Socialism. But there is evidence, not cited by Eckel, suggesting that Rothfels did indeed vote for Hitler in April 1932. [2] The veracity and significance of this evidence will have to be sorted through by the Rothfels experts; in the meantime, it is probably safe to say that the matter is not yet settled.

Concerned more with his biological ancestry than with his right-wing politics, the National Socialists removed Rothfels from his Königsberg professorship. Some of the most compelling reading in Eckel's book can be found in the chapter describing how the persecuted professor received encouragement and support from some students and professional colleagues, while others turned their backs on him (also compelling, later in the book, is the account of how magnanimous Rothfels could be toward German colleagues whose conduct after 1933 was less than courageous). Rothfels' attempts to remain active as an historian in Germany after his forced retirement met with increasing frustration, and in 1939 he left for Britain, acquiescing in the bitter reality that his Fatherland had become too dangerous for him. In 1940 he left Britain (where, for a time, he had been interned as an enemy national) for the United States, where he remained until 1951. In the U.S., Rothfels secured positions at Brown University and the University of Chicago. The section on the sojourn in America is not as thoroughly researched as other parts of the book, but it does do an admirable job of positioning Rothfels within the context of the German émigré scholar community. In contrast to fellow émigré historians such as Hans Rosenberg and Felix Gilbert, Rothfels resisted any notion that Nazism had been the symptom of some fundamental problem with German historical development.

Among the works produced by Rothfels in the United States, Eckel highlights the importance of The German Opposition to Hitler, published in 1948. The book was not limited to the subject described in the title, but encapsulated Rothfels' assessment of a wide range of issues related to the history of National Socialist Germany. Eckel is right to lay a good deal of emphasis on this book, although he understates the degree to which it had originally been targeted at a specifically American audience. In the book, Rothfels took issue with what he considered to be unfair stereotypes of Germans that had been expressed by American politicians and by the American media during and immediately after the war. These included a negative perception of the 20 July conspirators, who had been portrayed in some American newspapers as Prussian militarist gangsters who were morally no better than Hitler. Rothfels' sympathetic portrait of the conspirators as noble-minded idealists later became a staple of West German Zeitgeschichte. As Eckel points out, it served a dual role, symbolizing the supposedly widespread opposition of the German people against Nazism, while at the same time refuting accusations from the West German far right that the conspirators had been traitorous criminals. The German Opposition to Hitler, Eckel contends, proved to be paradigmatic for conservative West German thinking about the Nazi past during the 1950's and 1960's in a number of further respects. It depicted the German people in general as the unwilling subjects of a barbaric dictatorship, maintained that most Germans did not agree with the regime's anti-Jewish policies, and characterized the bombardment of German cities and the expulsion of ethnic Germans from Poland and Czechoslovakia as Allied atrocities.

Thus, as described by Eckel, Rothfels' return to Germany in 1951 can be understood as a central event in the post-1945 restoration of a nationalist-conservative historiography that had been compromised by its collaboration with National Socialism and threatened (albeit only briefly) by denazification. The continuities in Rothfels' own historical outlook corresponded to those of his professional colleagues. Chief among these continuities were a generally positive assessment of the German Reich founded by Bismarck, a historical legitimation of German hegemony over East-Central Europe, and an emphasis on the unfairness of Germany's treatment at the hands of the victors of the two world wars. An additional thread running through the entirety of Rothfels' career was his open acknowledgment of the contemporary political utility of historical scholarship. This kind of "presentism" is widely practiced and even openly championed by many historians today, although usually on behalf of emancipatory, rather than conservative or reactionary projects.

The Hans Rothfels described in the pages of this book is a German nationalist through and through, but neither a racist nor a Nazi. He emerges from the book as a scholar of penetrating intellect, a stimulating and charismatic teacher who was highly devoted to his students, and a man of great personal generosity and magnanimity. Eckel also acknowledges Rothfels' openness to methodological innovation, a quality that served him and his students well in the Federal Republic (as they had in Königsberg before 1933). Jan Eckel deserves praise for his effort to bring a modicum of balance, fairness, and broad historical perspective to a subject that has generated more than its share of recriminations.

[2] The evidence in question is contained in a letter from Kaehler to Rothfels, dated 25.4.1932. It is cited, although not reproduced, in: Friedrich Meinecke. Akademischer Lehrer und emigrierte Schüler. Briefe und Aufzeichnungen 1910-1977, eingeleitet und bearbeitet von Gerhard A. Ritter, München 2006, 36. I am grateful to Prof. John. L. Harvey of St. Cloud State University, Minnesota, USA, for making me aware of this publication. Eckel lists the document in his bibliography (339), but does not cite it in his text. If Ritter is correct that Rothfels voted for Hitler over Hindenburg, this does not necessarily mean that Rothfels was a Nazi in 1932, but only a fool.