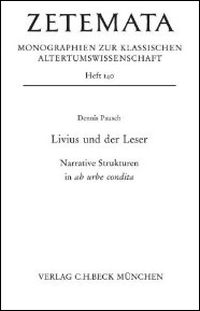 The last decades may be called an age of the author in the interpretation of ancient historical writings. In place of evaluating these works primarily in terms of their content, above all the accuracy of what they tell us about the past, some scholars, controversially, began to think of them more as rhetorical performances. New literary approaches, and new understandings of historiography in general, showed how individual authors shape an understanding of the past in more ways than by introducing errors through carelessness, bias, or credulity. Dennis Pausch's monograph hints at a coming age of the reader. Approaching the historian's work less as a collection of data, or a commentary on the present, than as a sustained act of communication between author and recipient, Pausch investigates the techniques Livy employs to shape his audience's reception of the past, even to maintain their engaged interest, over a narrative that originally covered some 750 years of history in its 142 books.

Throughout this project, Pausch draws on a broad knowledge of narratological theory. But he begins by demonstrating why an approach oriented towards the reader especially fits the historical and intellectual context within which Livy wrote. Augustus' coming to power coincided with a huge expansion in the potential audience for Roman history. This expansion was both geographic and social as new classes achieved prominence and power. Livy himself, a native of the recently enfranchised city of Padua, may well have belonged to the first generation of his family to think of Rome's history as its own. Previously, a heterogenous and competitive culture of memory configured the Roman past: Noble families won prestige by commemorating the accomplishments of their clan through a variety of media from oratory to architecture. That a relative outsider like Livy produced one of the most ambitious, and ultimately influential, versions of Rome's story became possible thanks to equally important transformations in intellectual life. The professionalized study of the past competed against the narratives of the old nobility with the promise of more accurate knowledge. And this promise appealed because the stakes of history itself were changing. Promoting one's glorious ancestry no longer brought the same political rewards, but knowledge of Rome's past enabled the new players in Augustan society to affirm their Roman identity.

What strategies does Livy use to win over this new audience? For Pausch, the answer begins somewhat surprisingly with the annalistic form. Far from being the only available format for such a comprehensive historical project, annalistic history in Pausch's view offered significant advantages for the involvement of the reader. Despite its seemingly repetitive and inconvenient structuring of events according to the annual rhythm of Roman magistracies, its very regularity made variations more striking. Even the interruption of multi-year campaigns could draw the reader forward in the story. At the same time this scheme always placed the audience's present in direct relation to the past, as the sequence of years extends toward the "now". And its combined organization of space and time, with a narrative return to Rome at the beginning of each year, allows the reader to trace the stages by which the world's history becomes part of this Roman pattern. Pausch highlights two aspects of Livy's narrative within this overall structure as particularly important for involving his reader, the use of multiple focalization and of suspense. While the narrative's pro-Roman perspective is never really in doubt, Pausch argues that moments in which events are viewed from the outsider's point of view, most dramatically in the account of Hannibal's crossing the Alps, engage the reader's attention and judgment and give an impression of balance that adds to the historian's credibility. Suspense heightens his audience's enjoyment of the work. But it also inspires historical reflection, particularly in presentations of "virtual history" where readers are led to consider the factors that kept events from taking a different course. The potential for a historical narrative to generate suspense in the first place may seem limited: after all, many readers will already know at least in outline how major events will turn out. But Pausch clears the ground with an appeal to psychological research confirming that even someone who knows how a story will end, even someone re-reading a work of fiction, can experience suspense.

Pausch has thus discovered a very original application of narratological theory to a reading of Livy and raised an important topic by focusing on the extraordinary difficulty of sustaining such "communication" between author and reader over a work on this scale, written over a period of almost 40 years. The challenges Livy faced in embarking on a project whose ending point, both as text and narrative, was unforeseeable prompt reflection on how few of those who began the first pentad would have had the means, indeed the lifespan, to make it to the death of Drusus in book 142. Of course this does not make it impossible for the author to conceptualize an "ideal reader" for the entire project, but Livy's first readers for their part were being drawn into an "ideal text" whose very existence still lay in the future. The historian's preface hints at the ideological significance of this phenomenon in setting up the central "cliffhanger" of his narrative: will the morally therapeutic power of history insure that Rome has a future, or will the present age prove unable to take its medicine? This question will only be answered when, and if, Livy's story ever reaches the present. But this notional ending implies a wager on the continuity of the res publica itself, both as the subject of history and the context for its writing and reception. And according to the logic of the preface this continuity depends in turn on his audience's selectively imitating the examples the text presents in their own lives. Thus the ideal end of reading comes when the lived experience of the readers converges with the story Livy tells.

Fortunately, Pausch's own readers face a less daunting task and can count on many rewards along the way. Each discussion begins with a survey of ancient historiographical theory on a particular topic. Anyone interested in the perennial question of the audience for history as a genre will find the essential texts, both Greek and Roman, handled with authority and imagination. Pausch's account of the contemporary historical and literary background to Livy's work may well be the most thorough, and most thoroughly up to date, available. Indeed the bibliography, which includes items more recent than I would have thought possible, constitutes a very useful resource in itself. And since Pausch insists on the value of his approach for the entirety of Livy's surviving text, he includes analyses of passages from throughout the work, not just the first pentad and other familiar hunting grounds for the literary Livy.

Pausch ends by leaving it up to the reader to decide how much the issues he explores contributed to the ultimate success of Livy's work. Some in his own audience might use this generous gesture to test the limits of the readers' power in general. For while Pausch frequently allows that different members of Livy's audience will have responded to the text in different ways, his book still focuses on "Livius UND der Leser." It concentrates on the strategies an author uses to stimulate engagement rather than the engagement itself. His narratologically based approach may thus be contrasted with full-blown reader-response criticism of the sort represented by British classicist Charles Martindale's mantra that "meaning is always realized at the point of reception." I highlight this distinction not in criticism of Pausch but because it raises important questions about the interpretation of Augustan literature in particular: The engagement of new audiences in totalizing representations of Rome and its past has emerged as a defining feature of the period. But this means that what we have identified as most worth knowing about this literature, what it actually meant to the people who read it, can only be approached through speculation. Even if he is left contemplating such a dilemma, this reader responded to this text with gratitude for a genuinely involving study of Livy.