Megan Cassidy-Welch: War and Memory at the Time of the Fifth Crusade 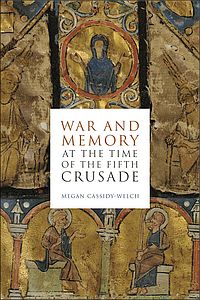 As has the anniversary of the Fourth Lateran Council (1215), so too that of the Fifth Crusade (1215-1221) has provided occasion for scholarly reappraisal and recontextualization. After her work on monastic concepts of space and community and editing Remembering the Crusades and Crusading and Crusades and Memory, it is no surprise that Cassidy-Welch's latest monograph reconsiders the medieval commemoration of war. Although the study of war memory has been traditionally associated with postmodern questioning of medievalism's employment to lament a vanished past and "narratives of progress located within nationalist parameters," she nonetheless judiciously employs modern theoretical frameworks to analyze how premodern societies commemorated and contextualized conflict (4-6).

If war is "integral to the performance of Western cultural identity" (3), crusading's communal nature ensured that remembrance became crucial for forging and maintaining collective memory and contextualizing individual endeavors within religious frameworks (salvation and biblical history, eschatology, prophecy, liturgy, prayers, "eyewitness" accounts), and within local, familial, and regional traditions and the protean concept of "Latin Christendom." Commemoration thus became a particularly essential component of crusading in the later twelfth and early thirteenth centuries, when the justification and promotion of and participation in crusading was broadened and aligned with moral reform and individuals, communes, and noble families turned to crusading legacies to construct their identities. Cassidy-Welch carefully defines her central focuses: how individuals and communities decided what to remember and what to forget; the processes of remembering and commemorative forms; interaction between individual and communal meaning-making both during and immediately after the campaign of the Fifth Crusade; and how remembrance rationalized, provoked, and gave meaning to actions.

Chapter one examines how crusade participants forged individual, familial, and communal identity through an ongoing set of processes begun from the moment an individual chose to participate in a crusade through taking the cross, participating in the liturgy, or donating resources. One might ask, how precisely did the broadened definition of participation change how individuals associated with the crusading community (18-21)? Cassidy-Welch stresses that remembering was a social process and that the crusades provided one framework for the development and performance of medieval identities. Crusaders turned to familiar models; remembrance was key in the medieval period for staking out membership in particular collectives (kin groups, guilds, and monasteries) as well as individually assumed identities (e.g. "pilgrim") signaled by established preparations and rituals. Citing the cases of Barzella Merxadrus and Henry, count of Rodez, Cassidy-Welch argues that surviving charters illuminate individuals' attempts to project their "self reputation [...] into the future" and ensure commemoration by communes, families, and religious institutions (21-2). Bequests also highlight the role of women as participants in the crusade and keepers of familial memory, functions recently identified by Nicholas Paul and Anne Lester (27-8). Then, as now, participants in war were concerned about the fate of their remains, specifying their burial in places associated with religious and/or local and familial commemoration. Sermons, speeches, prayers, and liturgies linked crusaders' actions to past conflicts, histories, and home-front liturgies and urged them to appropriate motivation and action. Certainly, as this reviewer has stressed elsewhere, writers and clergy in the crusader camp worked overtime to situate the crusaders' identity and actions within the context of familiar religious practices and temporalities. Ultimately, individual Christomimetic actions in the present were granted meaning only in the context of communal Christian identity, the salvific past and prophetic or eschatological future.

Chapter two explores the crucial role played by eyewitness accounts in commemoration. Building on recent work by Marcus Bull and Elizabeth Lapina, Cassidy-Welch outlines the importance of witnessing as part of Christian and martyrific identity. For many medieval ecclesiastical chroniclers, historical and spiritual truth were aligned; eyewitnessing and testimony were also important to medieval legal culture. She uses the riveting letters of Jacques de Vitry to illustrate that subjectivity, contingency, vivid descriptions of material objects, places, and emotions, and the finessing of facts were narrative strategies employed to assert the "reality" of the individual's witnessing of a collective experience and to transmit an "experience" to others who were not there (44-61). These individual choices signalled to audiences what was worth remembering; crusade narratives and letters formed part of a larger trend where historical writing was transformed into a "witness discourse" in an attempt to redefine the appropriate subject matter of history and to determine who was worth remembering and why (58).

Chapter three specifies the ways in which chroniclers of the Fifth Crusade linked its collective activity to the actions of individual crusaders and groups through the use of cultural scripts that influenced how events were selected and recounted: crusading, holy war, martyrdom, and ideal conduct and behavior (both religious, communal, and chivalric). Who was selected for commemoration as individuals, as regional groupings and as other categories (Christian/Muslim, men/women, ecclesiastic/lay, dutiful or ideal crusader versus deserter/sinner/apostate), revealed cultural codes of conduct by which behaviors were rated as praise- or blameworthy. Each author pitched the group with which they identified as "ideal" crusaders who contributed to a collective enterprise which nonetheless failed due to sins of others targeted for criticism. The process was a complex one: how could chroniclers define what constituted an appropriate length and quality of service (and their obverses, "desertion" and wrong motivation), and depict problematic events such as captivity (was it shameful or an opportunity for witness and suffering in imitation of Christ)? The narrators' task was complicated by the fact that Frederick II had been envisaged as one potential crusade leader but had never joined the crusade army. Chroniclers' and letter writers' evaluation of decisions made by the crusade's varied religious and lay leaders, particularly once its final disastrous outcome became apparent, was conditioned by their works' use as spurs for continued recruitment for what became known as the crusade of Frederick II. Remembrance of the Fifth Crusade had to be shaped to persuade specific audiences (including the Frisians, Flemish, French, Germans, Italians, and English) that their efforts were not in vain and would be needed again in the near future (88).

Chapter four therefore explains how chroniclers created positive meaning and purpose from suffering and loss by relating the crusade to transcendent discourses of time and space: apocalypticism, prophecy, salvation, and biblical history. This occurred most overtly in clerical interpretations of the slaughter which took place on the feastday commemorating the beheading of John the Baptist. Perhaps overly familiar with medieval authors involved in the anti-heretical crusade who then participated in and narrated the Fifth, this reviewer is not entirely convinced by the theory that crusader ecclesiastics were reluctant to extend the status of martyr to a wider range of crusaders due to the need to prevent those executed for heresy from being perceived as martyrs (95). Clerical reticence more likely stemmed from the difficulty of assessing interior motivation and contrition, which most Paris-educated ecclesiastics believed were of greater importance for salvation than external actions. The overtly contrite who died of disease were happily labelled as martyrs by Jacques de Vitry (70-1), but could the same be said of disobedient and disorderly crusaders slain in battle (86, 94-5)? This weightier focus on interior states would reinforce Cassidy-Welch's emphasis on mental and emotional suffering as proof of eyewitnessing (ch. 2) and contemporary vernacular poetry's focus on demonstrations of emotion as one hallmark of ideal knightly sacrifice (97-8).

Chapter five exploits Cassidy-Welch's expertise on monastic spaces as loci for collective identity and remembrance to consider how sacralized topographies served similar functions for particular groups of crusaders. Texts overtly linked specific regions to Christian history in order to justify crusades as defensive wars which reclaimed formerly "Christian" and "sacred" territory in the Baltic, Iberia, North Africa, and the Holy Land. Her work in highlighting the ways in which successive generations of Frisian and German crusaders used Lisbon and Damietta as sites for cultural, religious, and crusading memory through narrative history, burials, miracle accounts, and the foundation of churches is innovative and brings to light several neglected sources (98-123).

The monograph's concluding chapter considers the ways in which remembrance was embodied and enacted in the creation and transferal of sacred objects associated with crusading. Jacques de Vitry's life is a unifying link between chapters, and Cassidy-Welch focuses on objects which Jacques acquired and utilized before bequeathing them to the canonry at Oignies where he had begun his active ministry: a portable altar, a parchment miter, and ivory, glass, and rock crystal containers. These objects not only embodied Jacques' personal identity as preacher and bishop, but his enduring ties to the canonry of Oignies and the means by which individuals and communities associated themselves with particular places and saints from Holy Land through artifacts which mediated past and present, spiritual and material. As did his letters, histories, and the prayers he requested, Jacques' bequests linked his life in the West to his mission in the East, a pattern mirrored by countless crusaders, pilgrims, and travelers (126-46).

Cassidy-Welch concludes that remembering always has been and will be "an active practice of representation, bringing the past and present together in service of the imagined future" (152); this was certainly true for communities and individuals invested in the crusade project. Her valuable monograph will prove tremendously useful to those studying medieval historiography, crusades, materiality, and war memory.