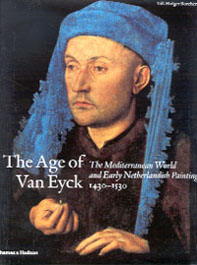 The publication results from the exhibition "Jan van Eyck, de Vlaamse Primitieven en het Zuiden, 1430-1530", held at the Groeningemuseum, Bruges, from March 15 to June 30, 2002. In the preface, the curator of the exhibition, Till-Holger Borchert, and the artistic director, Manfred Sellink, cannot help but relate their project to the "Flemish Primitives" exhibition held in Bruges in 1902, indeed a landmark in the reassessment of Early Netherlandish painting. However rewarding a visit to the current exhibition was, it did not seem to have much in common with the objectives of its famous predecessor.

According to Borchert and Sellink the catalogue differs from other publications of this type as it is intended primarily for the general public "without the overwhelming scholarly pyrotechnics [...]. This reflects our view that the academic value of this project lies in the exhibition itself" (7). This is a remarkable claim that scholars of fifteenth-century panel painting will, no doubt, find rather difficult to accept. Does it mean that the exhibits were chosen at random? Without much justification based on research, learning and expertise? Of course, one is aware of the fact that Bruges 2002 as Cultural Capital of Europe 2002 demanded a spectacular show, in the first place to attract the masses. Business as usual? What else could explain the following statement: "Above all, as the organizers of the exhibition, we are convinced that it ought not to represent the culmination of study but that it should form the catalyst for further, hopefully innovatory research" (7). I really hope so, too.

As no scholarly intentions are claimed the reader will understand that it is difficult to judge this publication from a scientific point of view. The book is conveniently divided into two parts. The first consists of sixteen contributions by various authors, of which the first two by Till-Holger Borchert give a useful overview of the research on Jan van Eyck's workshop production and of the mobility of fifteenth-century artists. It is difficult to share Borchert's opinion that beyond the work destined for princely courts, virtually nothing has survived of pre-Eyckian Netherlandish panel painting (9). At least two dozen other panels can be added to the two works mentioned by Borchert, the "Calvary of the Tanners" and the "Shrine of Saint Ursula". These works are not well-known and not well studied, but they do represent a firm basis to retrace the roots of the Eyckian "ars nova". In his second survey Borchert paints a vivid picture of how crucial the mobility of artists and the dynastic relations between the European courts were to the spread of the "ars nova" in the fifteenth and early sixteenth centuries.

Michael North's essay on the development of the art market offers a general account of its historical evolution. He explores its roots in Italy, the Netherlands and Spain, also focusing on the origin of art fairs and the culture of collecting.

The next nine contributions deal with the assimilation of Flemish art all over southern Europe, especially in French, Italian, Spanish and Portugese art centres. One of the authors, Philippe Lorentz, does not hesitate to describe what occurred in the kingdom of France as "the 'colonization' of the main French centres of the arts by Flemish artists and Flemish painting" (71). The new pictorial view in France was brought up by 'borderline' artists such as Simon Marmion and Jacques Daret. The first trained in Amiens before migrating to Valenciennes. The second was working together with Rogier van der Weyden in the studio of Robert Campin in Tournai and he settled in the nearby town of Arras. Lorentz then concentrates on the life and work of the highly interesting Master of the Paris Parliament "alias" André d'Ypres. His work undoubtedly testifies of Rogier van der Weyden's influence which might also have been strengthened by renewed personal contacts between the two painters.

Margaret L. Koster discusses the artistic exchange between Flanders and Florence, questioning and trying to avoid commonplaces, while at the same time re-examining the evidence in its full complexity. Indeed, the author asks many a fair and fresh question concerning the supposed pre-eminence of Italian quattrocento painting. The Florentine taste for the Eyckian style, subject matter and motives is well documented. It is one of the most revealing contributions in the catalogue.

Elena Parma shows that Genua and the district of Liguria were very early and constant importers of Flemish paintings. Interest in the art of the Low Countries at the princely courts of Milan, Ferrara, Urbino and the kingdom of Naples is surveyed by Mauro Lucco and Andreas Beyer respectively. Similar worthy surveys on the Iberian Peninsula, with the kingdoms of Aragon, Castile and Portugal are presented by Joaquin Yarza Luaces, Pilar Silva Maroto and José Luis Porfirio. These are all well documented articles, mostly offering well-known but often completed and updated information on the subject.

Jacques Paviot's "Burgundy and the South" seems to fall somewhat out of line as it only offers generalized background information on Burgundian court life, while at the same time brushing a wide panorama of the court's "international" relations. How the leading cultural role of Burgundy was perpetuated under the Habsburgs is related by Dagmar Eichberger.

The section of essays finishes with three classic issues. The first contribution is by Paula Nuttall who gives a survey of the impact of Netherlandish portraiture in Italy, a story that has been told many times before. Manfred Sellink deals with the Flemish invention of landscape. This was a new pictorial motif that was highly praised by the Italians, except for Michelangelo's disapproving comment. Finally, Till-Holger Borchert and Paul Huvenne trace the legend of Jan van Eyck's invention of oil painting.

Full-page illustrations of the exhibited works together with reproductions of many other paintings for comparison are scattered throughout the articles. The scholar and the general reader alike will surely be charmed and seduced by the quality and quantity of the many colour reproductions.

The catalogue itself constitutes the smaller second part of the book. It consists of tiny illustrations of the exhibited paintings followed by summarizing catalogue entries. In addition several paintings that were not on display are included in the catalogue. Some of the attributions of Eyckian panels are questionable at the very least, such as the two versions of the "Stigmatization of Saint Francis", one in Turin (Galleria Sabauda) and the other in Philadelphia (The Philadelphia Museum of Art). The former is ascribed to Jan van Eyck, the latter to Jan van Eyck and/or his workshop. The much debated "Saint Jerome in His Study" in Detroit (Detroit Institute of Arts) is accepted as executed by Jan van Eyck and an assistant, while the version of the "Virgin and Child at the Fountain" from Noortman BV in Maastricht is supposed to be the work of Jan van Eyck and his workshop.

No doubt these paintings all rely on Eyckian prototypes, but there is no historical or technical evidence to firmly document Jan's contribution to either of these panels. Several weaknesses in the compositions and execution are visible to the naked eye. They prove that the paintings were done by less talented followers, yet skilled artists, most probably after Jan's death. The two "Saint Francis" panels and the "Saint Jerome" refer to different Eyckian models. The Noortman "Virgin and Child" is an (almost) exact copy after the Antwerp original in the Museum voor Schone Kunsten. In the exhibition the latter two paintings offered a special opportunity to observe the differences between Jan van Eyck's genuine execution and that of (a) follower(s). Unfortunately both small panels were hung too far apart to stimulate their comparison. One hopes that forced attributions like these do not mirror the kind of revaluation of Early Netherlandish painting the organizers had in mind. Some more preliminary "scholarly pyrotechnics" could have been useful in this case.

Other critical remarks could comprise the choice or relevance of some works and the general presentation, but I prefer to put the scholar's lament to silence at this point. The catalogue is indeed a handsome book for the general reader, but it cannot be considered a landmark in the investigation of Early Netherlandish art. Yet, one has to admit, this was not the authors' intention either. I am looking forward to the projected publication of critical reflections and further research.