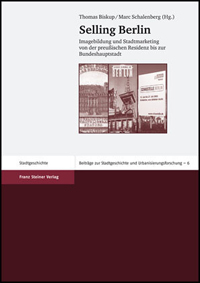 Unlike Rome, Paris, and London, which have ancient roots and can look back at long histories as national capitals, Berlin is of comparatively recent (thirteenth-century) origin and can boast of only three centuries as a capital of varying constituencies: Brandenburg, Prussia, a united Germany, the Weimar Republic, the Nazi empire, the GDR, and the Federal Republic of Germany. While those other cities enjoy readily recognizable profiles in the cultural imagination - e.g, "eternal Rome" - Berlin has needed constantly to reshape its image to meet changing circumstances.

To explore this shifting landscape of images the editors invited a group of urbanologists - architects, city planners, public relations experts, sociologists, art and literary scholars, and historians - to a conference in February 2005. The editors point out that the "marketing" of such cultural constructs occurred long before the process was institutionalized around 1900 and taken over in recent decades by professionals who sell the city as a "product" (335).

The volume traces this development in four chronologically organized sections, beginning with Berlin's role from 1701 as seat of the Hohenzollern kings. Contrary to his reputation as "soldier-king," Friedrich Wilhelm I after 1733 and inspired by the Dresden of August der Starke commissioned a neighborhood of residential palaces in the western quarter of the city, built in the style known as Berlin Baroque (Melanie Mertens). This dynastic initiative was paralleled by the great Hohenzollern wedding festivals, which followed a distinct representational pattern (Daniel Schönpflug). By 1800, contrasting images were competing: Berlin's critics took its sand as a metaphor for its shifty moral foundation while local boosters projected the image of a "boom town" ruled by enlightened reason (Thomas Biskup). During the 1820s the image of thriving modernity was publicized in travel books, in the panoramas and dioramas of C. W. Gropius and Eduard Gaertner, in Schinkel's buildings, and in the porcellans of the KPM (Marc Schalenberg). At the same time, a more ironic note contrasting Biedermeier reality with royal propaganda was sounded by Heinrich Heine in his Briefe aus Berlin (Esther Kilchmann).

As Berlin gained the stature of a metropolis, its image shifted. The Museumsinsel was developed, in conscious contrast to the museums of Munich and Dresden, as a "national" museum after the model of those in Paris and London, and its "marketing strategists" emphasized its role through catalogs and other publications featuring a common "corporate design" (Tilmann von Stockhausen). On a more popular level, the idealized concept of a sevententh-century "Alt-Berlin" was nurtured in the theaters, exhibitions, and photographs by Heinrich Zille and others (Katja Zelljadt). While the museums and "Alt-Berlin" were aimed largely at tourists, the Social Democrats of Wilhelmine Berlin were fashioning a mass culture for the working classes with an effective transportation system and newspaper reports on events throughout the city (Peter Fritzsche). The quick wit known as "Berliner Schnauze" came into such prominence that it could be exploited for propaganda purposes during World War I (Jan Rüger). During the 1920s in the face of hostility among Germany's national-conservative elite, Berlin was aggressively promoted as a tourist destination - and, in contrast to Paris, as Europe's most modern city after the model of New York and Chicago (Daniel Kiecol). Yet while the city began actively to campaign to become the capital of the Weimar Republic, the lack of any real political consensus was illustrated by the inability of factions to agree on a single major monument as a national symbol, relying instead on Schinkel's Neue Wache (Christian Saehrendt). The Nazis with their grandiose celebrations and megalomaniacal architectural projects finally succeeded in making Berlin into the "Reichshauptstadt" (Robert Graf).

After the wartime destruction of the city the regrowth of tourism from 1946 to 1970 can be charted by a comparison of urban aspects emphasized by the guidebooks in East and West Berlin (Stephanie Warnke). East and West were rapidly exploited as show windows for their respective life styles and standards of living (Alexander Sedlmaier). This competition intensified with the grand architectural projects undertaken on both sides in anticipation of the 750th anniversary of Berlin in 1987 and emphasizing such different potentials as "the future capital," "the European city," and "city of the avantgarde" (Hendrik Tieben). The image of Berlin as the capital of the GDR shifted as the state's absolute power monopoly was gradually liberalized and critical voices were heard - Wolf Biermann, Stefan Heym, the culture of Prenzlauer Berg - while the opposition gained in strength (Angela Borgwardt).

The concluding "Visions and Memories" in a reunified Berlin involve its role as an "East-West Turntable" against a bohemian backdrop of still unsuccessful capitalistic enterprise (Alexa Färber). The myth of Potsdamer Platz from its 1735 inauguration to its heyday in the 1920s as the "heart of Berlin" was demythified by the competing proposals for its restoration (Sybille Frank). The process is dramatically evident in the various visions for renewal of Potsdamer/Leipziger Platz: from total deconstruction of the original plazas to the modified historicism of the final plan, as city planning - once the purview of royalty - is increasingly dominated by private investors (Thomas Albrecht). Today the image of the city as a show place for "the New Berlin" has been taken over by professional image marketers (Volker Hassemer). Meanwhile, various Berlins of the past live on as "palimpsests" in the memory of writers and historians (David Midgley).

The high information-value of the volume is vitiated in part by the lack of an index and by the excessive jargon in several of the contributions as well as occasional slips. (The Hufeland who criticized urban life was not "der Berliner Mediziner" but, at the time he wrote, still a professor in smalltown Jena (70).) There are also quite a few missed opportunities. Since the chapters leap from 1800 to 1820, "Romantic" Berlin is missing: the founding of Humboldt's university in 1810, which provided the international model for the modern research university; the funeral procession of Queen Luise that same year, which unified the populace as no earlier occasion and few subsequent ones did; the invention of the modern daily newspaper with Kleist's short-lived Berliner Abendblätter. The discussion of Schinkel's museum is limited to the paintings inside; it fails to consider the enormous (and conscious!) symbolic effect achieved by situating the Temple of Art alongside Palace and Cathedral (state and religion). Did not Fontane and Raabe create images of Berlin that dominated the imagination of thousands of readers outside Berlin? Can "Berliner Schnauze" be discussed without a reference to Gerhart Hauptmann's plays? Is the new "Ostalgie" a current version of the former longing for "Alt-Berlin"? And for at least some present-day flaneurs the Berlin palimpsest reveals not simply such recent sites as Döblin's Alexanderplatz but such eighteenth-century treasures as Schleiermacher's residence (corner of Glinka/Taubenstraße) or the Prussian courthouse where E.T.A. Hoffmann had his judicial offices (reduced today to the entrance hall and garderobe of Libeskind's Jüdisches Museum).

All in all, however, the volume provides a fascinating, if spotty, perspective of Berlin from the unusual standpoint of "Stadtmarketing" by "urban imagineers" (279).