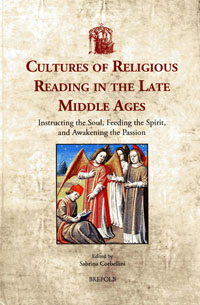 Opening with Jerome's directive to Eustochium to "read often, learn all that you can", editor Sabrina Corbellini begins a new volume in the Utrecht Studies in Medieval Literacy series and thereby sets the stage for a collection of thirteen compelling essays that engage the reading practices of late medieval laity. Stemming from a conference titled "Holy Writ and Lay Readers", the volume is organized in four sections: Latin and Vernacular - Orthodoxy and Heterodoxy; Print and Public: The Impact of Printing on the Dissemination of Orthodoxy; Socio-Cultural Contexts of Production, Acquisition and Reading of Vernacular Religious Books; and Religious and Sacred Texts in the Vernacular: Methodological Aspects of a Social History of Reading.

While each essay is a case study about readers of religious materials, the first two sections, as their titles suggest, are more focused on issues of orthodoxy, with the latter oriented towards book history, both praxis and theory. As a result, there is a lack of cohesiveness in the various case studies introduced and some appear in one section when they might as easily be placed in another. The final section is the most incongruent, opening with a wonderful essay on the history of reading studies by Margriet Hoogvliet entitled "Pour faire laies personnes entendre les hystoires des escriptures anciennes": Theoretical Approaches to a Social History of Religious Reading in the French Vernaculars during the Late Middle Ages." Hoogvliet's essay in many ways helps orient the collection and it might have usefully been placed first as a means to consider the various approaches to reading taken up by other contributors. The other essay in the fourth section, Andrew Taylor's "Displaying Privacy: Margaret of York as Devotional Reader" also seems decidedly out of place as it is more like Anna Adamska's "Latin and Vernacular - Reading and Meditation: Two Polish Queens and their Books" in section three. Both essays examine the ways that aristocratic women were able to use their resources to support their engagement with books. The other essay that stands apart from the rest is Werner Williams' "The Medieval German Lives and Miracles of St. James", which attends less to issues of potential and probable vernacular readers and more to the vernacular reception of St. James' cult via the Legenda aurea. This approach places it at a disadvantage in this collection, despite the valuable information offered about oral traditions about St. James preserved via visual materials.

The organizational problems aside, Cultures of Religious Reading in the Late Middle Ages offers much to scholars working on medieval reading. One strand of inquiry, which was the subject of the conference, investigates vernacular Bibles to illustrate that not only were scriptures available in a number of vernaculars, but that they were also considered orthodox reading across late medieval Europe. Eyal Poleg's "Wycliffite Bibles as Orthodoxy", Mart van Duijn's "Defining the Delft Bible (1477): From Printer-Public Dynamics to Extant Copies", and Suzan Folkerts' "The Cloister or the City?: The Appropriation of the New Testament by Lay Readers in an Urban Setting", are three of the most intriguing of the volume, in part because they provide a comparative understanding. In England, as Poleg demonstrates, the Wycliffite Bibles were intended for the use of priests, nuns, and laity, being less about Lollardy than about making the liturgy available to vernacular readers by the inclusion of tables of lections that allowed readers to follow and participate in liturgical performance. By contrast, van Duijn demonstrates that the advent of printing in the Low Countries sought to augment the manuscript tradition of vernacular New Testaments with vernacular Old Testaments for lay readers. The surviving copies of the Delft Bible, however, are not identical as they were printed in distinct units that could be collected together into long or short versions, allowing buyers to select a printed text that met their needs. Folkerts' discussion complements van Duijn's in that she emphasizes the importance of urban locales for lay readers, and in her investigation, she shows that Dutch translations of the New Testament (produced as part of the Devotio moderna movement) were adapted to make them more flexible, especially for female tertiaries, beguines, and lay female readers.

As the essay by van Duijn suggests, printing and the availability of mass-market books for lay readers is another strand of inquiry. Koen Goudriaan's "The Church and the Market: Vernacular Religious Works and the Early Printing Press in the Low Countries, 1477-1540" and Kristian Jensen's "Reading Augustine in the Fifteenth Century" both attend to the question of clerical influence on printing. Goudriaan concludes that church authorities had very little effect on printing in the Low Countries, that the printing of books was conducted independently from the institutional movement Devotio moderna. Of particular interest is the differentiation in this study between "Devotional Works" and "Hagiography" or "Books of Hours" which were printed far less frequently in this period. Similarly, Jensen finds very little evidence that the extensive reading of Augustinian or pseudo-Augustinian texts was done by Austin Friars or at their instigation. Instead, she suggests that based on large body of printed texts, one can discern a decided "textual universe" that is evident through a set of shared behaviors. While hers is a very interesting argument about the collective reading habits of laity across Europe, it would be enhanced with evidence that illustrates that printers were responding to this shared behavior as an impetus for producing these volumes.

The third strand of inquiry in this collection is the orthodoxy of religious reading in the vernacular. Where I have already noted that Poleg's essay is focused in this direction, it shares with three other contributions a concern with the appropriateness (or not) of vernacular readings. Else Marie Wiberg Pedersen's "Heterodoxy or Orthodoxy of Holy Women's Texts: What Makes a Holy Woman's Text Holy?" investigates the writings of the Cistercian prioress Beatrice of Nazareth (1200-1268) and the beguine Margarete Porete (ca. 1255-1310), illustrating the commonalities of the women's theology but distinguishing each's reception as a vernacular writer. Where the former was celebrated in a vita after her death (and probably beatified), the latter was burned at the stake for heresy. After an overly long contextualization of orthodoxy, Pedersen argues that the "corporealisation" or the presentation of a theological message, was a means of protecting holy women. This is an interesting contention but one that is not fully supported by the discussion presented here; an additional problem is that she does not cite a wide range of scholarship on female mystics, theologians, or beguines which has engaged with issues of the body. Alternatively, Sabrina Corbellini's "Beyond Orthodoxy and Heterodoxy: A New Approach to Late Medieval Religious Reading" is an excellent presentation of a range of lay readers in Italy, ones who procured their own books and/or wrote their own translations. Not all of these readers were noble, and it is Corbellini's discussion of merchants, artisans, and widows that is the most compelling, as they were actively engaged in rewriting and transforming their own meditational texts. Finally, John J. Thompson provides a thought-provoking essay, "Reading with a Passion: Fifteenth-Century English Geographies of Orthodoxy," which demonstrates that there were "a multiplicity of quasi-theological positions" between orthodox and heterodox in late medieval England.

As I have suggested, a better organizational plan for the volume would have been useful and perhaps one or two of the essays saved for another publication. Still, virtually every essay is very well written and researched, and the editor is to be congratulated for bringing together a wealth of research on medieval readers in France, Italy, England, the Low Countries, Germany, and Poland. One difficulty of our profession is making available materials that provide contextual data across a wide geographical range, so it is encouraging to see a volume that allows us to consider comparatively the religious reading of late medieval western Europe.