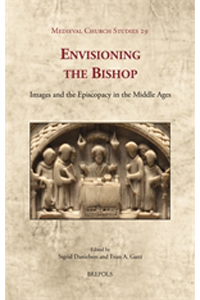 Envisioning the Bishop is a well-crafted collection of articles centered on images of medieval bishops. The articles are extremely wide-ranging, both chronologically and geographically, with offerings from all parts of Europe between the 4th and the 13th centuries. Despite this broad range the articles complement one another beautifully, thanks not only to their careful selection, but also to the editors' useful introduction which introduces the reader to the recent historiography on the topic and suggests ways in which the present essays tie together. Maureen C. Miller's afterword performs a similar service by suggesting yet other ways in which the articles complement one another.

Examples are drawn not only from the visual arts, but also from literature, poetry and architecture. Aneilya Barnes studies Rome's earliest Christian basilicas for evidence of the increasing wealth and power of bishops in 4th century Rome, determining that the bishops gradually introduced a new architectural style which was radically different from that favored by earlier female patrons. Dorothy Hoogland Verkerk describes the 10th century carvings on the West Cross at the ancient monastic site of Monasterboice in Ireland, which portray the crucified Christ extending two oversized hands toward shepherds on either side of him, one shown shearing a sheep and the other milking a doe. The image on the cross suggests Christ handing over the care of his flocks to the bishops until He returns at the Second Coming, an image also depicted on the cross. Other essays by Sigrid Danielson, Evan Gatti and Joanne Pierce discuss the ways in which manuscript illuminations and cover decorations for liturgy books meant for medieval bishops both testified to their authority and modeled appropriate episcopal virtues.

Turning to literary images, John Ott analyzes the poetry of Fulcoius of Beauvais to explain the downfall of Archbishop Manasses of Reims (1069-80) at the hands of Pope Gregory VII. Although the poet, a member of the archbishop's court, portrayed Manasses as a staunch supporter of the papacy and the reform movement, he also showed Reims and Rome as equals, just as their classical founders, Romulus and Remus, had been twins, with no question of seniority or superiority between them. Winston Black's "Teaching the Mnemonic Bishop in the Medieval Canon Law Classroom" is a particularly intriguing study of the short poems inserted in the canon law texts used in medieval universities. Intended as both memory aids and tables of contents, they indicate what scholars of the day thought was most important for the students to remember, ranging from simple lists of desirable moral qualities to more complex questions of canon law.

Two essays accomplish the difficult task of analysis across mediums. Jennifer Kingsley discusses the use of images of St. John the Baptist and St. John the Evangelist in connection with the 10th century reform in Anglo-Saxon England and Ottonian Germany. She analyzes both literary texts and artifacts meant for the bishops' use to show how the pairing of the two St. Johns with medieval bishops became a potent model of the monastic virtues expected of the reformed hierarchy. Similarly Kara Ann Morrow describes the St. Stephen and St. Ursin tympanums atop the southernmost portals of the west facade of Bourges Cathedral. She notes that similar renditions placing St. Stephen and contemporary bishops in conjunction with Moses and Aaron, the Old Testament precursors of Christian bishops and deacons, are found in Bibles moralisées produced about the same time. Thus the status of the medieval bishops was enhanced through their connection with their predecessors.

The studies by Barnes, Danielson and Morrow illustrate the use of images to bolster the authority of the medieval bishop. Similarly Deborah M. Deliyannis discusses donor-portraits in the churches of Ravenna, which show Bishop Ecclesius (522-532) presenting a model of the church to Christ, even though other evidence indicates that a certain Julian argentarius was the primary donor who made the construction of the churches possible. Deliyannis suggests that the donor-portraits of Ecclesius were probably commissioned by his successors as a way of emphasizing episcopal continuity and strengthening episcopal authority. In another essay dealing with the issue of episcopal authority, Kalani Craig explores Gregory of Tours' evocation of the Old Testament priesthood as a model for the hereditary Gallo-Roman episcopate of which he was a member. Gregory's evocation of the biblical Levites justified the handing down of the priesthood along family lines and the image of Gallo-Roman bishops working alongside the Merovingian kings became a model for the integration of the two groups into one Frankish culture.

As Maureen Miller notes in her afterword, many of the images discussed here are examples of "norm building from below" (433). Whether the artists were Irish sculptors working on monumental stone crosses, manuscript illuminators decorating new liturgy books or teachers seeking to distill lessons in canon law into poetic memory aids for their students, the creators of these images had definite ideas about what a bishop should be. Thus George Hardin Brown discusses the way in which Bede positioned himself as a trained and inspired monk qualified to instruct and advise the leaders of the church, all the while remaining obedient to the diocesan bishop. Alice Chapman analyzes St. Bernard of Clairvaux's De Consideratione, noting his employment of the images of prophet, shepherd, apostle and steward to demonstrate that ministry was the primary duty of the new pope, and by extension of all bishops. Since the bishop's role also included secular duties, images of dominion were also appropriate for the medieval bishop; however Bernard included a strong warning to the pope about keeping his priorities straight and not allowing secular duties to overwhelm his ministry.

One of the most intriguing examples of such norm-building is found in Sita Steckel's study "Between Censorship and Patronage." She analyzes 8th and 9th century Carolingian book dedications to bishops and finds that, while some merely reflected a patronage relationship, others explicitly asked the bishop to review the work and correct any errors. Such pre-censorship has been seen as a 12th century development, so Steckel suggests that the ideal promoted in these book dedications may have created the later reality.

As Danielson and Gatti point out in their introduction, images are not simply static representations, but in some sense they are events because they have different meanings to the creator, the subject and the person who experiences them. Nowhere is this more clearly evident than in the two essays by Sherry Reames and William J. Diebold, which could profitably be offered to graduate historiography classes as examples of the way in which modern circumstances influence historical interpretations. Reames traces the changing image of the last of the Anglo-Saxon bishops in "Rewriting St. Wulfstan of Worcester." To his approximate contemporaries Wulfstan was primarily a capable administrator and a vigorous defender of the rights of his see, who maintained good relations with both Anglo-Saxon and Anglo-Norman rulers. However by the time of Simon de Montfort's rebellion against Henry III, he had been transformed into the last champion of a beleaguered Anglo-Saxon Church. Diebold focuses largely on an art exhibit centered on the Ottonian bishop, Bernward of Hildesheim, which despite the antiquity of the subject, was in fact politically charged even in 1993 because of the Nazis' fascination with that period.

Those seeking to mine Envisioning the Bishop for their own work will appreciate several points about the scholarly apparatus. All the essays are well documented and include a formal bibliography at the end of each. Quotes are given in both the original language and in English translation. The essays concerned with the visual arts are illustrated by black and white photographs, many by the authors themselves. More general readers will take away two lessons from this exceptional collection: that images come in many different mediums and that they all have lessons to teach about their contexts, their creators, their subjects and those who experience them.