Douglas N. Dow: Apostolic Iconography and Florentine Confraternities in the Age of Reform 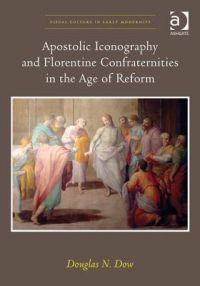 Douglas Dow's book on apostolic iconography and Florentine confraternities looks at ca. 200 years of confraternity history during the crucial period in which Florence turned from a city-republic into a Medici grand duchy. Under the influence of the charismatic ecclesiastic, Alexander de' Medici (1535-1605), three confraternities adopted organisational rules and artistic iconography by which they tried to connect with the original followers of Christ and also recalled the longevity of the Catholic Church.

Dow starts by setting the scene of the Florentine Archdiocese at the end of the sixteenth century and introduces Alexander who was going to be elected as Pope Leo XI one month before his death in 1605 but had previously spent a busy life as cardinal and archbishop as well as ambassador for his Medici relatives (9-22). In particular with his cousin Cosimo I, admired for his religious zeal by the Great-Inquisitor Michele Ghislieri, later Pope Pius V, Alexander worked well together on matters of innovation and church reform. Alexander took a keen interest in the arts and set out on a course of renovation after his appointment as archbishop of Florence in 1584, starting with the archiepiscopal palace in Piazza San Giovanni and continuing with the church of Gesù Pellegrino. In doing so, he did not forget Florentine traditions, such as the entry of St Antoninus Pierozzi (1389-1459) during Lent of 1446 which he chose to emulate at least as far as the humility of its season was concerned. Indeed, Alexander was going to combine an eagerness for religious reform with a desire to underpin the continuity between his predecessors in office and his own tenure. St. Antoninus was a perfect role model, not only since he had been under Medici patronage as abbot of the convent of San Marco whose building had been financed by Cosimo the Elder and was designed by the same architect as Palazzo Medici. The Dominican Antoninus had also served his patrons on diplomatic missions.

In this light the study takes a close look at three confraternities and in particular at the artistic commissions given to the artists of the day: Giovanni Balducci's frescoes in the Church of Gesù Pellegrino (23-73), sculptures of the apostles in the Oratory of San Giovanni Battista detto dello Scalzo (75-102) and frescoes of the martyrdoms of the apostles in the atrium of the Oratory of Santissima Annunziata (103-69). All three cycles were created in the 1580s and 1590s by Florentine artists also working for the Medici court to embellish buildings whose history went back for at least the better part of a century. All of the buildings were located in the area north of Florence Cathedral which started to become Medici-land by the early fifteenth century.

Alexander had been a member of the confraternity belonging to the fourteenth-century church and hospice of Gesù Pellegrino (Via San Gallo) and was sorely disappointed by the state of the building during a visit in 1584 (24). The Oratory of San Giovanni Battista on today's Via Cavour had occupied less grand confraternal premises since the early fifteenth century. The confraternity consisted of a congregation of artisans engaged in ritual self-flagellation as is clearly indicated by Benedetto Buglioni's glazed terra-cotta relief above the main door, leading to a long sequence of rooms. According to Vasari's Lives, Andrea del Sarto was probably a member - he decorated the chiostro with his frescoes and may have found burial in the company's tombs in SS Annunziata (76-8). The confraternity of the Scalzo had decided on an aspirational as well as ruinously expensive re-decoration with sculptures of the apostles to complement Lorenzo di Credi's altarpiece of the Baptism of Christ, when Alexander visited the Oratory on 3 May 1590. In the following years sculptors who were also members of the confraternity started to donate their own works to the Scalzo in return for exemption from fees and dues as confratelli (81-5). Finally, the Oratory of Santissima Annunziata on Via Capponi was also marked by a glazed Buglioni relief which declares the company's devotion to the Virgin Annunciate. The premises are set out in a shape similar to that of the Scalzo but were built during the early years of the sixteenth century at some point after the confraternity had stopped meeting at the Ospedale degli Innocenti (post-1509). Bernardino Poccetti, member of the Accademia del Disegno, Bernardino Monaldi and Giovanni Balducci among others were commissioned by the company to create the fresco cycle of the martyrdom of the apostles as well as of the cardinal and theological virtues (105-11). It remains unclear whether Alexander was in any way involved or might have directly encouraged such a commission, given that the cycle is so extensive and ambitious and employed artists of some reputation. One might even postulate the immediate influence from one decorative project to the next within a climate that gave particular weight to Christ's disciples as a main inspiration on the rules and regulations of confraternities and their visual representation in the Florentine oratories towards the end of the sixteenth century.

Dow's book uses a rich quantity of illustrations to make his point, both plans and reproductions of the frescoes and some of the statues. His main difficulty lies in the suppression of the confraternities in the eighteenth century, the resulting lack of documentation, as well as the subsequent alterations to the buildings and their uses. Despite such obstacles, Dow brings to light much detail regarding the confraternities' organisation and motivation in commissioning new works of art both as embellishment of the oratories and as educational material for the confratelli. Thus he focuses on information no longer readily available to us, which was however part of a development of considerable importance to Florentine citizens of the early modern period.

Dow attempts to demonstrate how at least some of the Florentine confraternities adopted ideas of Catholic reform and used them in visual form by the end of the sixteenth century. The members of such companies were largely lay professionals who, like the apostles, had been moved to follow the example of Christ. Among the confratelli will have been the occasional ecclesiastic, for example Alexander de' Medici, but the emphasis of the companies' work and outward representation rested on collaborative lay effort as far as their place of congregation and their devotional practices were concerned. The archbishop, ostensibly operating in an ambience of Florentine traditions going back to the fifteenth-century reform movements started by St Antoninus, will have been aware of such an identification with the apostles and may even have encouraged such a religious bond - in particular since it chimed well with the art of the Counter-reformation. Nonetheless, in particular in the case of the Scalzo, the artisan members themselves not only devised a decorative scheme with statues of the apostles but also a way to finance such an ambitious undertaking. In the end a significant number of sculptures was donated by artist members. This kind of organisational effort certainly speaks for the importance accorded to the project through all ranks of the company. Even though the particular examples discussed by Dow originated in the late sixteenth century and may have their direct theological roots in debates about art, devotion and decorum during the decades after the Council of Trent, one wonders nonetheless whether the connection of confratelli, in particularly artists, and the disciples whether as followers, teachers or martyrs may not have had a longer, specifically Florentine tradition.