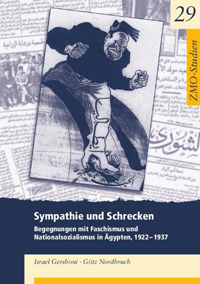 Sympathie und Schrecken situates Egypt in the political world of the interwar period. The authors manage in an exemplary way to locate a central topic of Egyptian public discourse in a broad realm of domestic political agendas and socio-political and economic challenges, without overstating the influence that the subject of the debate - Fascist and National Socialist ideology - had on Egypt's political public. As a balancing act, the current political relevance of the topic renders this a goal that is not easily achieved. Finally, but not least of all, the book is a celebration of liberalism and pluralism in the Egyptian-, and in a broader sense Arab public sphere of the interwar period - without ever slipping into an apologetic tone.

Israel Gershoni and Götz Nardbruch are two internationally renowned experts of Arab perceptions of Fascist and Nazi ideology. Gershoni has dedicated much of his career to the analysis of nationalist thought in Egypt. His numerous works are a cornerstone of the historiography of twentieth century Egypt. Nordbruch, who belongs to a younger generation of Middle East historians, provided in an earlier book a highly sophisticated analysis of a political discourse about Nazism and Fascism in interwar and World War II Syria. In Sympathie und Schrecken, the two cooperated to re-work a Hebrew book by Gershoni, incorporating recent findings to produce a very rich and readable, yet densely documented account. [1]

The book is, however, not narrowly focused on a presentation of occurrences of pro- or anti-Nazi standpoints in the Egyptian political public. Instead, it is a history of Egyptian political debate - both domestic and international - of its own right. It covers the years between 1922 and 1937, the period of the so-called "Liberal Experiment" in Egyptian history, starting with the release of Egypt into independence and the subsequent imposition of a parliamentary constitution by the British, and ending with King Faruq's takeover of full royal powers when he reached majority in 1937, and the dismissal of the Wafd Party government under Mustafa al-Nahhas. The years in-between were shaped - with interruptions - by lively public discourse, but also by growing dissatisfaction among the educated Egyptian youth, the so called "Young Effendiyya," with the hegemony of the wealthy bourgeoisie over positions of political influence within the constitutional order. Moreover, the period was one of competition between the palace and royal prerogatives on the one hand and the power and independence of the elected legislature on the other hand. Gershoni and Nordbruch weave their assessment of public opinion and the respective exchanges among Egyptian intellectuals elegantly into an account of the ups and downs of political conflict between parliamentary rule and royally sanctioned dictatorship between 1922 and 1937. The underlying argument is that perceptions of Fascism, Nazism, and dictatorship in general were as determined by Egypt's domestic predicament, as evaluations of the expansive international politics of Italy and Germany were determined by their position in a broader context of imperialist engagement in the region and worldwide.

In the 1920s, the intellectual sphere of Egypt was strongly committed to liberal and democratic values. But already then, publicists and authors were keen observers of the authoritarian trends in Europe, sometimes admiring Mussolini for the image of strength and efficiency that he presented. Dissatisfaction with the populism that the Wafd government used and the authoritarian style of its leader Sa'd Zaghlul led some to compare the latter to Mussolini, whereas others called for enlightened dictatorship as a tool to stabilize society in times of accelerated social and political transformation. When King Fu'ad made Isma'il Sidqi Prime Minister from 1930 to 1933, his oppressive regime and the curbing of political liberties and freedom of press led to an increased interest in European dictatorships, using them as a mirror for the negative consequences of authoritarian rule. The rise of the Effendiyya provided additional context for the evaluation of European ideologies. The new middle class of highly educated young men despised the hegemony of old elites and triggered discussions about the role of youth in society, as well as about the formation of militant youth organizations along the lines of the Fascist and Nazi youth movements. Students of high schools and the Egyptian University were particularly frustrated with the discrepancy between their self-perception and actual career expectations. In that, the urban phenomenon of the militarist "Shirts" movements of young men offered an ambivalent image. The "Blue Shirts" sought affiliation with the Wafd leadership, who endorsed them remaining wary of their militancy. Embracing them was a way to co-opt youthful energy. "Blue Shirts" clashed with the "Green Shirts" of the Young Egypt party, which evolved to become the closest mimicry of fascist organizations in Egypt. They cultivated the Führer principle, praised Germany and Italy for their representation of strength, and even endorsed racism and anti-Semitism at times. However, Ahmad Husayn, Young Egypt's leader, went to great lengths to dissociate himself from Mussolini and Hitler as he knew that public discourse in Egypt mistrusted any alignment with European powers in fear of their imperialist greed. Especially Italy's colonial enterprise in Libya, and the invasion of Ethiopia in 1935 made any association with Mussolini undesirable. Many, however, sought to make a clear distinction between Mussolini and Hitler, who had admirers in Egypt's intelligentsia promoting him as a model of national reform and a return to strength. The militarization of youth and their education as a force of the future appealed to Egyptians who sought ways to close the ranks of Egyptian society. Gershoni and Nordbruch pay close attention to the writings of Egyptian author Salama Musa who had harboured a strong interest in Nietzsche's ideas of the Superman, combined with elitist Fabianism since his student days in England before World War I. He became one of the most prolific writers promoting socialist and nationalist reform during the interwar years including topics ranging as far as eugenics and socialist workers reform. For a time, his admiration for Germany included an endorsement of Hitler's racist agenda. However, as the 1930s progressed, he grew sceptical of the Nazi regime and came to reject its oppressive and expansionist politics on the eve of World War II.

The Muslim Brothers take up another ambivalent position in this account. On the one hand, their leader Hassan al-Banna could have been hardly more explicit in his rejection of the nationalist and chauvinistic imperialism and racism of European fascists. Gershoni and Nordbruch document numerous statements that he made underlining this stance. On the other hand, the Muslim Brothers were another strictly organized authoritarian Young Effendiyya organization challenging liberalism and pluralism in Egypt. The efficiency of Hassan al-Banna's charismatic leadership and his authoritarian control over a strongly hierarchical organization reached tens of thousands of adherents, dwarfing the membership of Young Egypt in the 1930s. The Muslim Brothers reached broadly into the middle class appealing to the politically conservative activism of a generation of young men who rejected the secular nationalism of their elders. As such, the Muslim Brothers represent a phenomenon of grass roots mass mobilization of a young generation that fed on similar dynamics as those that drove the emergence of fascist youth movements in Europe. However, the emergence of the Muslim Brothers happened within the dynamics of a rapidly transforming Islamic society, and did not follow a fascist model.

To conclude, Sympathie und Schrecken builds on research that the authors had published primarily in English. It is a very laudable effort in itself to make it available to a broad readership in a country where there is a natural historical interest in the topic, but where there is also little knowledge about the strength of liberal and pluralistic traditions in Middle Eastern societies. The deep knowledge, empathy and skilful contextualization that the authors apply makes this book essential reading for anyone who is interested in the cultural and intellectual history of the Modern Middle East.