Giancarla Periti: In the Courts of Religious Ladies 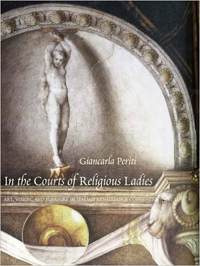 Whoever reads about the horrific fate of the Nun from Monza, gains a good impression from Alessandro Manzoni's description of what it meant to be an elite girl, whose family was unable or unwilling to dower their daughter for marriage. Many a girl, and not solely from the upper ranks of society, found herself forced to enter a nunnery in early modern Italy (and elsewhere) whether for economic, familial or political reasons. At a time when there were few career options open to women, and virtually all of them bad, the girls' own wishes usually remained disregarded. While a true religious vocation may occasionally have triggered the decision to become a bride of Christ, if such a step was willingly taken, it was more often to escape plans their families had hatched.

During the fifteenth century, nunneries had greatly increased in numbers and so many girls entered religious foundations of some kind that by the sixteenth century the church and the state found it necessary to interfere. During the Counter-reformation and in the wake of the Council of Trent, the Catholic Church sought to regularise nuns' lives and to bring the diverse religious houses under control. Fewer nunneries were allowed to exist and those who did needed to become less independent. Therefore, they were increasingly taken under the spiritual and administrative supervision of monk's orders, a service for which they had to pay considerable sums of money. As for the interest taken by the state may serve the example of Cosimo I de' Medici who in 1548 ordered a census of the nuns in Florentine nunneries. The aim was to understand which institution was patronised by which family of former oligarchs and how such patronage was distributed across the duchy and likely to create hotspots of resistance to his rule.

Poor nuns occasionally led hard, often industrious lives - in particular during times of crisis caused by famine or epidemics - and could be lent out to textile manufacturers and other enterprises if they were not engaged in fundraising activities to earn their keep or go hungry. In the case of elite women, the situation was more diverse as well as changeable. As Giancarla Periti's new book outlines, nuns of good families lived in a liminal space, liminal in more than one way, by occupying a precarious position between the secular and the sacred that needed to be re-negotiated at many points in their lives. Such a negotiation process that underpinned their standing in society both inside and outside the walls of their convents, involved a rich material culture of artistic commissions. While many of these commissions were religious in nature, there existed also a surprising number of works of art and other luxury items whose character is perhaps somewhat unexpected among the possessions of a nun but would seem entirely normal listed in the inventory of a secular court.

In six substantial and richly illustrated chapters, Giancarla Periti explores the lives, surroundings and possessions of elite nuns. The particular focus is on the example of the convent of San Paolo at Parma and the works of art created there for the sixteenth-century abbess Giovanna Piacenza by Araldi and Correggio (chapters 4 and 6). However, this study goes far beyond a straightforward exploration of a specific convent setting or the patronage of a single high-powered member of its hierarchy. The aim is rather to outline the diverse functions a nunnery fulfilled for its heterogeneous group of inmates (e.g. protection, education, spirituality and even pleasure). It sets out the nuns' ambitions and efforts in creating appropriate spaces that would offer them the chance of a fulfilling life and puts the kind of material culture produced for them (chapter 3, 29-97) into the context of the cultural achievements of sixteenth-century Italy.

When a young lady entered a convent there were a number of ceremonies that jointly constituted the right of passage from the secular to the sacred and that hinted at her future as a bride of Christ. The processional route led the future nun dressed like a secular bride through the gates of the nunnery into a room in which she would be tonsured and changed her attire as part of a rite that was not dissimilar from a wedding celebration, clearly marked the transition of her status but also included her official sacrifice of beauty. From now on there would be particular rules to regulate the order of her day, her activities and contacts as well as her dress. Nonetheless, we know from the writings of the day as well as from portraits and other works of art that not all nuns were obedient (22-27) and that there were regular scandals. In fact, as Jacometto Veneziano's portrait of a possible novice (Fig. 48) which was once joined to that of a male sitter (57-60) seems to attest, bonds of affection were not necessarily severed and girls did not really give up their desire for beauty when they entered a convent. After a certain period inside, they were expected to take their vows, but even that did not mean that they would always give up their first and / or familial names and thereby forgo status and ambitions. Elite nuns also entered with a (reduced) dower and with something like a trousseau and their own furniture.

Family connections helped nuns to keep connected to the outside world but also assisted them in climbing the career ladder towards the higher offices and to gain greater freedom within the structures of the convent. Abbess Giovanna Piacenza was one of those ladies who made such an ecclesiastical career and whose lodgings attested to her high status. As Giancarla Periti states, she became thereby part of a tradition that was regarded as more appropriate for male dignitaries who as abbots or bishops might inhabit entire palaces but that was also followed by female orders. Portraits from France and Lower Saxony (Figs. 91 and 92) also attest to the longevity of a custom that meant that as an abbess it was possible to live in the kind of accommodation that elite women inhabited at the secular courts of Europe and to surround herself with luxury furniture and furnishings that hinted at her own importance as well as at the power of women in general (100-101). It is precisely the inclusion of such topoi in the decoration of conventual apartments that has not been studied enough before, although rather than claiming it as a step beyond what secular women of the same status would dare, it seems on a par and to make an abbess's life and surroundings highly comparable to that of an aristocratic lady married to a flesh-and-blood husband.

The high point of Giancarla Periti's discussion of Giovanna Piacenza's abbatial apartment at the convent of San Paolo at Parma is the presentation of her private chamber decorated by Correggio in 1518/19. The innermost room of a building newly added to the nunnery's complex, was crowned by a masonry vault with 16 spandrels. Correggio's decorative scheme transformed it into an all'antica place of delight, part garden bower, part display of ancient myths and works of art. Tondi of playful putti are inserted into the segments of the umbrella dome, while the ensemble's centre consists of Giovanna Piacenza's coat of arms (three crescents) repeated in the monumental Diana's headdress. The decoration of the room could and can be read in secular and religious key; as possible models for this dichotomy may serve both Leonardo's Sala delle Asse at the Sforza castle of Milan (Fig. 157), 1498-99 and Mantegna's Madonna of the Victory (Fig. 158), 1495-96 (Louvre).

What makes this book so worthwhile is the focus on objects and fashions in high-class monastic accommodation across Europe. By comparing what was allowed at male and female orders, before and after the Council of Trent, or north and south of the Alps, Giancarla Periti draws the attention to the living spaces of an important and sizeable section of the population, able to choose and commission works of art and other objects made by the foremost artists and artisans of their time. Nonetheless, the fact that the focus of the book is on a group of people, i.e. religious women, not necessarily as much on the minds of scholars as their achievements and their partaking in early modern culture seem to justify, makes it even more obvious how much remains to be done by modern scholarship. The liminality of secular and religious noble women's roles and apartments alike, the need for constant negotiation, the dependence on their families' plans and means as well as the relentless contempt shown to them as less worthy, means that their lives were directly comparable.