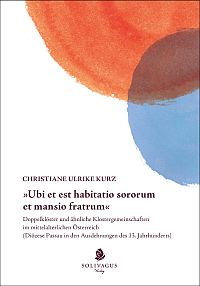 In her study, Christiane U. Kurz describes the thirteenth-century landscape of the Diocese of Passau (northern region of Austria between Vienna and Salzburg) as populated with twenty-six double-monasteries. Drawing from archaeological, visual, and textual sources, Kurz gathers evidence for the existence in this region of eight Augustinian double houses, seven Benedictine double houses, three associated with the Poor Clares and three with the Cistercians (though the Cistercian houses for women differed from the others in their formation and how they were run), two Dominican double houses, and only one each for the Praemonstratensians and for the Order of the Holy Ghost, a Hospitaller order associated with the Crusades. This list includes sites whose rich legacies are well-studied, such as Klosterneuburg (Augustinian) and Göttweig (Benedictine), foundations that were almost entirely rebuilt during the seventeenth and eighteenth centuries, such as St. Florian (Augustinian) and Melk (Benedictine), and monasteries that no longer exist or those whose status as a double house has been generally forgotten, such as St. Leonhard am Forst and Waldhausen (both Augustinian) and Kremsmünster (Benedictine).

The Latin phrase in the book's title derives from the twelfth-century Vita Almanni, the life of the Bishop of Passau, and it describes the double monastery in Göttweig as being a residence for the sisters and a house for the brothers. In her forward, Kurz explains that this phrase reveals one of the difficulties associated with studying double-monasteries, namely that there is no single term used to describe either the practice or the physical sites. Furthermore, the topic itself is fraught with contradictions between the romanticized notion of men and women working together harmoniously (and platonically) to achieve salvation and the difficulties that arise in structuring and overseeing such an arrangement. Given the increased scholarship on female monasticism, however, it is a topic worth pursuing and Kurz reveals in an overview of the scholarship that this tradition in Austria has yet to be thoroughly investigated.

Kurz's first and second chapters contextualize this practice historically and historiographically. Although there is evidence that double monasteries of some sort appeared throughout the Middle Ages, their peak coincided with the monastic reform movement of the eleventh and twelfth centuries. Touching upon individual authors who wrote for and against the practice, Kurz explains that Norbert of Xanten, founder of the Praemonstratensian order, strongly promoted female devotion and established the first double house of his order at Prémontré, whereas figures such as Bernard of Clairvaux and Peter the Venerable at Cluny admonished monastic cohabitation. The first chapter concludes with a list of the difficulties associated with pursuing this topic. Not only is there no particular term used for a double monastery, but to a certain extent the practice was written out of history. Kurz explains that medieval chroniclers often referred to the practice only obliquely or in passing, and she posits that this lack of information contributed to a limited interest in the topic. Only a handful of scholars have investigated Austrian double monasteries, among which Kurz cites a mid-nineteenth-century study by Ignaz Keiblinger, more recent publications by Otto Eigner and Brigitte Rath, and a dissertation by Gerda Davy.

Kurz's second chapter defines and discusses her three categories of evidence: buildings, if they survive, and archaeological evidence; visual representations both from the Middle Ages and later centuries, and written sources such as necrologies. Concerning architecture, Kurz raises questions about the gallery space in churches being used for female monastics and she refers to the tenth-century church of St. Walburga in Meschede as an example of a building constructed for women. Many Austrian monasteries were rebuilt during the Baroque era, so Kurz turns to paintings and prints that portray the older monuments. Manuscript imagery or stained glass can yield evidence for the presence of women at monasteries, and Kurz mentions the twelfth-century Guta-Sintram codex from the Abbey of Marbach in Alsace as an example of men and women working together. A number of these images are helpfully reproduced in color, but some are small and difficult to see - an issue that likely arises with the press and not the author. Finally, Kurz turns to texts associated with the day-to-day activities of the monastery, such as necrologies and account books.

The third chapter, the heart of the study, presents evidence of the twenty-six double monasteries. The houses are arranged by their orders and Kurz organizes the information for each foundation according to the same template. A general description of the role of women in that order is followed by a summary of the state of research on the site and an overview of the history of the foundation. Kurz then works through the built and archaeological, the visual, and finally the textual evidence. Except for a plan of Klosterneuburg's site and a hypothetical reconstruction of Reichersberg, Kurz mainly describes the buildings or information about the physical sites. A number of seventeenth-century prints that seem to portray the monasteries with relative accuracy offer interesting visual representations. In some cases, such as at Göttweig or St. Pölten, an enlarged detail better indicates the specific buildings or areas likely used by women. Especially interesting are the various textual transcriptions that Kurz provides. Not only are there full lists of monastic women named in different necrologies, as for Klosterneuburg and St. Florian, but there are also transcriptions of entries indicating medical attention, as from Ranshofen, and notations from account books, as from Klosterneuburg. Once all of the evidence has been presented, Kurz summarizes her findings in a short conclusion that reiterates how different the landscape of Austria looks following this more thorough and accurate account of the presence of double monasteries in the region.

The first two chapters of Kurz's book prepare the reader for this study of the Diocese of Passau, but Kurz misses an opportunity to further contextualize her findings with scholarship focusing other countries. Though she mentions that regions such as Bavaria and Baden-Württemberg have garnered a great deal of attention, she does not refer to scholars such as Fiona Griffiths, Julie Hotchkins, and Alison I. Beach, among others, who have published extensively in English on the topic. The strength of this book lies in the evidence that Kurz has compiled and the straight-forward manner in which she presents this material. It was not her task to build on this evidence with questions or speculative analyses, rather, she usefully provides information that will allow future scholars to conduct their own comparative analyses.