Martin Heale: The Abbots and Priors of Late Medieval and Reformation England 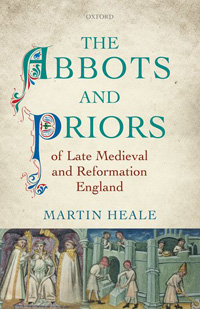 Martin Heale has written an excellent book. He expresses a detailed knowledge of his subject clearly, while drawing on a comprehensive range of sources. The synthesis of research by earlier generations of scholars with recent publications makes this a standard work for years to come. A survey of European research, especially French and German publications, provides the context for this study. Analysis of information from English houses of male religious is further enhanced by comparative examples from Wales and Scotland, and from English houses of women religious. The long time-frame of over three centuries crosses the divide between medieval and early modern history. The inclusion of the Dissolution of the monasteries by Henry VIII and its aftermath makes this book a valuable contribution to Reformation studies.

Religious ideals link traditional societies to the supernatural realm, bridging the gap between time and eternity, and defying earthly change. However, the people and institutions which embody these ideals are themselves the products of the society around them. This long-term study allows the telling of a more complex story than the institutional decline and corruption of Tudor state propaganda, and the works of earlier scholars from G. C. Coulton to A. G. Dickens. From the 1200s to the 1500s religious houses were more deeply affected by social change than was previously understood. They evolved in conjunction with society, to the point where neither religious nor secular elements reflected ancient and deeply-held religious ideals. By the Reformation, monasteries and priories had become as tarnished as the world beyond them in the eyes of their critics, fuelling desire for radical change.

The great era of monastic foundation in England was drawing to a close just as administrative developments were influencing both secular and religious institutions. In 1215 the king signed Magna Carta, which delegated political power to his lords in parliament. Benedictine legislation of this time required abbots to rule in consultation with their obedientiaries and chapters. In the 50 years preceding the Dissolution this balance of power was reversed by the Tudor monarchs and by heads of religious houses. Heale describes how abbots and priors concentrated the income and administration of obedientiaries in their own hands, while the crown increased control over religious houses.

The Medieval monastic ideal evolved in a predominantly rural society. While Medieval and Reformation critics looked back with nostalgia to a golden age of monasticism, changing patterns of estate management, the effects of urbanisation, and the ravages of the Black Death all complicated the economic and social organisation of religious institutions. The great monastic houses were no longer ruled by men from aristocratic families: a larger proportion of abbots and priors, like monks and nuns, were from gentry and mercantile families. The growth of education provided more abbots and priors with university degrees, like the secular clergy.

A major source of criticism by both contemporaries and historians has been the size and ostentation of abbatial households. Developments in the structure of great households, both secular and monastic, drew them together in terms of lavish display of wealth, large retinues of servants, and the obligation to offer hospitality to those of high social rank. Abbots and priors were caught between two worlds: upholding the status of their house when acting in local and national government, or on business for their order, and reflecting the sanctity of their office. Some of the most ostentatious churchmen were also reformers, for example Bishop Fox of Winchester, with a retinue of 200 servants. Lavish building programmes and the withdrawal of abbots and priors from communal life to their own lodgings paralleled the withdrawal of elite families into private space, away from daily life with their social inferiors.

Heale documents increasing royal domination over religious houses, especially from 1485 under the Tudor dynasty. Small houses were dissolved and their endowments appropriated by Henry VII. The crown controlled the election of heads of house, and their retirement pensions became the model for pensions granted to religious on the Dissolution of the monasteries, 1536-40. The historical literature assumes that elite or popular resistance to the Reformation could have changed the course of history. It is important to refute this anachronism, based on judgements by 19th -century historians living in a more democratic age. While it was not possible to deflect Henry VIII, an autocratic ruler, from his path, Heale provides a more nuanced reading of the sources on the process of dissolution and its aftermath. Resistance to the Dissolution by abbots and priors is not recorded in the official Tudor narrative, and many religious, both men and women, continued to honour their vocations in ecclesiastical office, or by living religious lives together in small groups.

A key problem with the sources and the historical narrative is how to detach contemporary lament for a lost golden age of Western monasticism from the historical facts. Martin Heale's book does just that: it tests the conclusions of earlier scholarship against detailed documentary research and provides fresh insights.