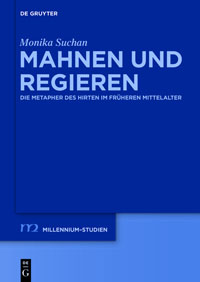 This is an ambitious book. It aims to study pastoral leadership from the ancient Middle East to the rise of the Ottonian dynasty, based around the intersection between "admonishing and ruling" as seen through the metaphor of the shepherd. In the end, it is a reflection on the dynamics between bishops and kings in the Frankish world and its implications for ideas on authority.

Suchan starts with a brief but serviceable methodology (2-25), discussing "metaphors", discourse analysis, the separation of "politics" and "religion" in Antiquity and the Medieval Period, and the Foucauldian concept of "pastoral power". This last topic informs much of her argument as it emphasises the "mutual responsibilities" between shepherds and their flocks and allows her to focus on the self-reflective nature of the texts. Combined with her understanding of "master metaphors" as ideas and concepts that represent large swathes of the societies under scrutiny, Suchan's work may be placed in the histoire des mentalités rather than pursuing, for example, a more philological path.

The next chapter present a bird's-eye view of the metaphor of the "shepherd" in the ancient Middle East, and how it gained a foothold in the minds of Early Christian thinkers (26-65). Citing the importance of the Pauline letters, Suchan argues that the idea of rulers as shepherds gained traction with the introduction of Christianity in the Hellenistic world - culminating in the performances of Constantine and his successors in the fourth century. While none of this should be seen as programmatic, the Nachleben of the imperial actions in episcopal affairs left its mark on the centuries that followed. The next chapter continues this line of reasoning by focusing on two important thinkers, whom she characterises as instrumental in putting the metaphor into the minds of subsequent generations. The way the first, Gregory of Nazianzus, reflected on the paradox of pastoral power when he was forced into an episcopal see despite his wish to be an ascetic became a powerful statement for others who struggled with similar idealistic clashes. One of these was Gregory the Great, whose Regula Pastoralis is the focus of much of the second chapter, and indeed the rest of the book.

Following Suchan's narrative, the indebtedness of the West to Gregory's influence went far. In a series of chapters seguing from Late Antiquity to the Early Middle Ages, she argues how papal missionary initiatives, especially on the British Isles, were vital to the spread of Roman ideas about leadership (90-98). His reception by Bede and the added importance given by Boniface to exhortation as a pastoral duty were, Suchan argues, key factors in the spread of the twin concept of "admonition and rule" in the Frankish world (99-126). Suchan describes Boniface's role as a political player who facilitated the Carolingian rise to power by presenting them with a Gregorian ideology filtered through Anglo-Saxon concepts of history and salvation. Thus, she describes the rhetoric on Pippin the Short's usurpation of the Frankish throne - with papal and episcopal backing - as an acknowledgment of his absorption of the ideal that a good ruler was responsible for the lives and the afterlives of his subjects (127-152).

The core of the book is the section on the Carolingians. With the Admonitio generalis (789) as a starting point, chapter 5 deals with Charlemagne and his entourage (153-232). Suchan reflects on the function and impact of the Carolingian "reforms" as a whole, and on the special relation between Charlemagne and Alcuin as his personal shepherd. From there, she explains how ideas about pastoral power were negotiated by members of the court, before moving to synods and capitularies. Suchan correctly and interestingly points out that it does not always makes too much sense to distinguish between the two, as both genres tap into a common discourse, and often sprang from similar communities.

The interplay between elites, bishops and kings/emperors in the ninth century reached its apex in the crisis years of the 830s, and Suchan's next chapter builds towards this momentous event and its aftermath (233-353). Her characterisation of Louis the Pious as a ruler who took his pastoral charges more seriously than Charlemagne fits with much older historiography on the subject, but it gets a different meaning in the context of Suchan's argument that the episcopacy had gradually become the shepherd not only of people, but also of the narrative itself. This chapter reverses the roles implied in the first part of the book. Good bishops also admonished kings, and in a digression about alliances and mutual oaths between the Carolingian rulers, Suchan shows that the rhetoric of harmony and friendship among the flock had found its way into the royal discourse. Hincmar of Reims stands out in this regard, as Suchan analyses the pastoral discourse within his De ordine palatii and De regis persona. A curious and regrettable omission here is the pastoral subtext to De Divortio Lotharii, perhaps the most well-known and provocative of Hincmar's writings, and a text that has received considerable interest in recent years. The narrative ends with a foray into the early tenth century, characterised by yet another series of crises of conscience as the Carolingian apparatus gradually gives way to external and internal pressures (354-390). These new developments were steered by bishops such as Hatto of Mainz and Salomo of Konstanz, who had the weight of tradition behind them and acted as the spokesmen of institutions shaped by generations of pastoral discourse.

Instead of a clear conclusion, Suchan closes with the observation that this theme is too broad to be covered in a single volume. In this, she is correct, and it should be noted that her work nonetheless showcases an impressive breadth of scholarship. It is perhaps because of this that its strengths lay bare its greatest weaknesses: some omissions that ought to have been included, however briefly. Most obviously, in spite of its ambitious opening, it is unfortunate that neither Byzantium nor the Ostrogothic and Visigothic Kingdoms have been visited in this book. Given the noted influence of these areas on Carolingian thinking about authority, the main argument would definitely have benefited if, for example, the interactions between kings and bishops in Visigothic Spain during the many councils held there were taken into account. Similarly, the almost total absence of Merovingian perspectives is jarring. Gaul was part of the same world as Rome and England. Ideas about admonition and secular rule certainly come to the fore in historio- and hagiographical texts from the era, as well as in sermons, pastoral treatises and conciliar acta - many of which were known to the Carolingians. These omissions do not necessarily detract from Suchan's narrative, centred as it is on ninth-century Francia, but with the breadth of the topic implied at the outset, what gaps there are become wider as well.

Apart from these issues, it is striking that hardly any mention is made of the monastic reforms at the time. The self-reflective Institutio Canonicorum (816-9) would have made an excellent addition to the argument, as would the works of such authors as Smaragdus of Saint-Mihiel. Similarly, while some attention is given to the adoptionist controversy, none of the other theological debates of the ninth century are studied, even if the predestination conflict has clear implications for the pastoral power of both rulers and bishops. Finally, given the emphasis on the relation between episcopal authority and royal power, the pseudo-Isidoran decretals, one of the "early adopters" of the developments described, are conspicuous by their absence.

Moreover, some assumptions are made that should make students of the Carolingian era wary. For instance, while legal texts, capitularies and conciliar acta were certainly part of a "pastoral discourse", this premise precludes a broader debate about the applicability and audience of these texts. The book implies that the Carolingian world operated as a top-down model of reform, which does not always hold up to scrutiny: the court profited as much from bottom-up initiatives, and local traditions persisted throughout the realm - something the author acknowledges, but does not always take into account in her analysis of individual texts. Because of this, it is not clear if Suchan assumes a pre-existing grand narrative of Carolingian reforms, or if her findings confirm this structure. Given the title and stated subject of the book, one group that is noticeably absent is the flock; shepherds are present throughout (as metaphors, power brokers and advisors), but their interaction is limited to an elite discourse - the people below them have neither voice nor agency. The reliance on a top-down perspective sometimes causes readers to lose sight of the complexities of the problems addressed by the author. In this, the book would have profited from a stronger narrative direction.

While this implies that the book should be handled with a certain amount of care, its qualities also speak for themselves. The broad chronological perspective and the way the sources - many of them capitularies, episcopal statutes, and admonitory treatises and letters - have been brought together around a common theme make this book well-suited as part of a course on early medieval rulers. More senior scholars will also find much of value in the main argument as it shines through the juxtaposition of the sources. The continuous reminder that pastoral power is a matter of mutual obligation is a point still worth making. The chosen theme allows Suchan to trace ideas about authority, and explain the questions faced by the Frankish elites. The result is an elegantly written book that, despite some notable if forgivable lacunae, provides an excellent reflection on an interesting topic.