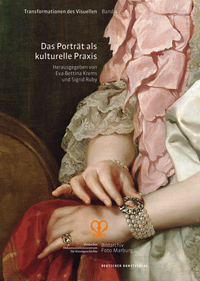 The rise of the selfie in recent years has had the virtue of bringing to light a longstanding characteristic of portraiture: like a selfie, a portrait is nothing if not shared, reproduced, and catalogued. As the editors of this volume demonstrate, the selfie is only the latest appearance of a 'cultural practice' of portraiture that goes back to the period of the Renaissance. With this multi-authored book, which arose out of a conference held in Marburg in 2011, Eva-Bettina Krems and Sigrid Ruby make an important contribution to the growing body of work that approaches early modern portraiture first and foremost as a social and cultural phenomenon.

One of the main points of the volume is, indeed, not only that the visual and material particularities of the early modern portrait are a direct result of the functions and uses of these images and things; but also, in a direct reversal of the argument, that the portrait actively shaped and facilitated image- and object-based cultural practices. The editors seek to shed light on the manifold appearances of the European portrait, from the revolution brought about by the printed image around 1500 to the early nineteenth century. The aim is to go beyond the isolated study of the individual portrait and instead to confront such topics as the specificities of patronage and production, physical and metaphorical spaces of viewing, display and storage, and modes of disclosure and distribution.

Following the editors' introduction, the volume is organised into six thematic sections: 'Distinktion und Identifikation', 'Dynastie und Historie', 'Diffusion und Verdichtung', 'Sakralisierung und Repräsentation', 'Beweggründe und Wandlungen', and 'Ansammeln und Ordnen'. Throughout these sections, various themes return: transmediality and the printed image; identity and identification; the practical use of individual portraits and their relation to the body; portraiture and confessionalisation; and image series and collections. To bring this true panoply of topics together, Krems and Ruby introduce two central axes around which the eighteen essays of the volume revolve: 'Verdichtung' (concentration) and 'Mobilisierung' (mobilisation). A concentration of images can be found, in a literal sense, in portrait galleries or books, but also in a more figural sense in the production of a standardised portrait type of a given sitter that was subsequently reproduced and distributed. Distribution connects directly with the second axis, mobilisation, denoting the spread of images in a social environment and via a variety of media. Indeed, contributions cover a remarkable medial variety, thereby demonstrating just how many forms portraits could take in this period, which is certainly one of the virtues of this book.

This becomes immediately clear in one of the first chapters, by Ewald Jeutter, on portraits of criminals from the sixteenth to the nineteenth centuries. Jeutter is particularly interested in transmediality and word-image relations, as in broadsheets publicising convicted or even already executed felons. He also analyses how certain images helped their 'sitters' become celebrities of sorts. Criminal portraits were always aimed at precise identification, and had a strong connection with the ideology of physiognomy.

Identification is equally important in the Sächsische Stammbuch, examined insightfully by Ruth Hansmann. Produced in two different campaigns, the latter one by Lucas Cranach the Elder's workshop, this hand painted portrait book required an active beholder to reconstruct the historical narratives presented. A highlight of the chapter is the presentation of a type of foldout sheet, devised by Cranach, that allowed for the portrayal of a given figure in various stages of their life. Eva-Bettina Krems's essay is likewise concerned with the direct use of a portrait: Lorenzo de' Medici's portrait by Raphael, she shows, travelled to France on a political-dynastic mission that intervened in Pope Leo X's and Lorenzo's conflicting ambitions for the powerful Florentine family.

In the section on 'dissemination and concentration', Dagmar Eichberger gives an example of the successful development of a recognisable portrait type, henceforth distributed in paintings, manuscripts, and wax medals: Margaret of Austria's 'branded' image served to underline the regent of the Burgundian Netherlands's prominence within the Habsburg family at a crucial point in her career. Cornelia Manegold points out that diplomats' portraits produced during the Osnabruck and Munster peace negotiations of the 1640s impacted the emancipation and institutionalisation of the diplomatic profession. Group portraits celebrating the 1648 peace such as Gerard ter Borch's (Rijksmuseum, Amsterdam) have shaped visualisations of peace processes for centuries on.

In a long essay, Philipp Zitzlsperger examines the important connection between catholic cult images and profane portraits in the context of the Counter-Reformation. The concept of 'virtus', denoting a power of things, is analysed as it appeared in art theory, economic theory and natural philosophy of the period. While virtus is proven to have been essential in the understanding of the efficacy of religious images, Zitzlsperger ends on an open question: whether virtus was believed to play a similar role in the workings of portraits deserves further research.

The next section consists of three stimulating essays about small-scale portraits and portrait miniatures. Sigrid Ruby addresses the performativity of Alessandro Allori's double-sided image of Bianca Cappello, grand duchess of Tuscany, with on its reverse an adaptation of Michelangelo's drawing Il Sogno. Forcing the spectator to continuously turn the object over, it stages a play between different artists, genres, imitation theories, genders and viewing practices. Both Marianne Koos's and Gerrit Walczak's contributions focus on miniature portraits and the ways in which these determine relations with and between viewers.

The volume's final essay goes in a slightly different and surprising direction: Christian Bracht points to the similarities between the organisational principles applied to collections of early modern graphic portraits and the strategies underlying present-day databases of the same. At the conference in Marburg where this book originated, the Digitale Portraitindex der druckgraphischen Bildnisse der Frühen Neuzeit was presented, and Bracht's essay makes clear how this online portrait database has its roots in early modern cataloguing, a field with connections to early modern bookkeeping and governance.

While the broad range of topics addressed in this volume is praiseworthy, overall stronger editing could have given it still greater coherence, both in formal terms and in terms of contents. Some essays inevitably present newer materials than others. In some cases, a more generous number of illustrations (I refer for example to Jeutter's text) would have been helpful, although the quality and quantity of illustrations in general are excellent.

All in all, the book is a valuable addition to the study of European portrait cultures, and demonstrates the great research potential of this field. It should be compulsory reading for anyone interested in the early modern portrait.