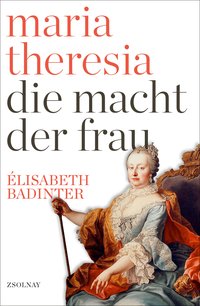 Kingship in early modern Europe was masculine by definition, even when a woman sat on the throne. Maria Theresa adapted herself to this male framework, but she did not hesitate to play the trump card of her femininity when it served her interests. She skilfully combined and performed three different roles; she was the sovereign ruler of the immense Habsburg Monarchy, the loving spouse to Francis Stephen of Lorraine - Emperor Francis I, from 1745 onwards - and the considerate but strict mother of sixteen children. She managed to turn femininity and motherhood into an asset for her power and authority in a way no female ruler before her had done. To Ernst Kantorowicz' theory of the king's two bodies - a mortal natural body and an immortal political body - we must therefore, in the case of Maria Theresa, add a third: the female body that gave birth and guaranteed the continuation of the dynasty.

This is, in a nutshell, Élisabeth Badinter's argument in Maria Theresia: die Macht der Frau. This monograph is a high-quality translation of the original French version Le pouvoir au féminin. Marie-Thérèse d'Autriche, 1717-1780. L'impératrice reine (Paris, Flammarion, 2016). In line with her feminist commitment, Badinter contends that Maria Theresa's sex thoroughly influenced her rule. Although in early modern politics, being a woman was usually a disadvantage, she managed to turn this to her advantage. The book is not a classical biography, but an investigation into Maria Theresa's personality and the ways in which she tried to frame and reconcile the three aforementioned roles. The focus is on the first three decades of her life - comprising two thirds of the book - with a large emphasis on the formative years of the War of the Austrian Succession (1740-1748). Inescapably, these different roles led to conflicts of interest, which are the leitmotivs of the chapters on the later years of her reign. Maria Theresa's marital love for Francis Stephen clashed with her painful realization of his lack of military talents. Despite her motherly love for Joseph II, their co-regency was dominated by arguments on political ideology and government.

The book is based mainly on correspondence. In the past century and a half, numerous letters from and to Maria Theresa have been edited. It is to Badinter's merit that she also consulted relatively unknown and unedited correspondences, such as the diplomatic reports of the Prussian envoys in Vienna, conserved in the Geheimes Staatsarchiv Preußischer Kulturbesitz in Berlin. They complement Carl Hinrich's edition of a selection of reports from the Prussian envoy Otto Christoph Count Podewils. [1] Even more important are the letters from members of Maria Theresa's entourage, such as her mentor, the Duke of Sylva-Tarouca, and of political advisors and diplomats, such as Wenzel Anton Count Kaunitz-Rietberg, Friedrich August and Ferdinand Bonaventura Count Harrach, and Philip Joseph Count Orsini-Rosenberg. These letters offer many glances at Maria Theresa's emotions. Throughout the book, the most cited letters are the diplomatic reports from the French envoys in Vienna.

Thanks to her research in family archives in several European countries, Badinter has gained novel insights into Maria Theresa's way of thinking. She is the first to underline the influence that self-confident female relatives may have exerted on the young archduchess and queen; among them her ambitious grandmother Christine Louise of Oettingen-Oettingen, her mother Elisabeth Christine, who felt frustrated by her exclusion from politics, and her aunt, the Dowager-Empress Amalia Wilhelmine. They served as powerful role models. Curiously, Badinter does not mention another politically active aunt, Archduchess Maria Elisabeth, governor-general of the Austrian Netherlands from 1725 to 1741. Even though Maria Theresa was unsympathetic to the obstinate Maria Elisabeth and tried to curb her influence, the governor in Brussels must have strengthened her conviction that femininity and government were not incompatible. Badinter also refers to Maria Theresa's anxiety about her sixteen pregnancies, as well as those of relatives, such as her beloved sister Maria Anna who died shortly after giving birth to a stillborn daughter in 1744. This aspect is often left unnoticed in the grand narrative of Maria Theresa's motherhood. The descriptions of her depressive moods once again demonstrate to what degree the letters used here provide insights into Maria Theresa's emotional life, and to what extent they offer possibilities for further research.

Badinter's thesis of the third body, for which she is indebted to the work of Regina Schulte [2], is, generally speaking, very valuable. Motherhood played much less of a role for other early modern female rulers, such as Elisabeth I of England and Catherine the Great of Russia. Maria Theresa, however, emphasized her unparalleled fertility. Her motherhood was perhaps the single most frequent theme in her representation. She had herself frequently portrayed with her offspring and wished to be seen with her children at court. She also consciously used her body and her emotions as a weapon, for example in her plea for help for the Hungarian Diet in 1741 - even though reality and myth can hardly be kept apart in this episode.

However, despite the value of these observations, Badinter's arguments are not entirely convincing. Firstly the notion of masculine absolute kingship is questionable. It is beyond doubt that kings were the norm, although female rulers, governors and regents are more numerous than scholars often assume. [3] But the royal body was always gendered. In fact, contemporaries associated a mixture of masculine and feminine qualities with this body. Scholars such as Cynthia Herrup have demonstrated that the ruler in early modern England not only disposed of two bodies, but also of a multi-layered gender-identity. There was a considerable amount of overlap between male and female traits. A good ruler had to be brave and peace-loving, unyielding and merciful, rational and emotional at the same time. The challenge was to combine both qualities in a balanced way. This did not apply solely to female rulers. [4] Louise Olga Fradenburg also showed that gender-transgression was characteristic for sovereignty. According to her, we can take plasticity between masculinity and femininity for granted, even if the result was the confirmation of the difference. [5] Badinter misses a chance to engage in this debate, which is all the more regrettable given that Maria Theresa's motherhood actually played an unusually meaningful role. Moreover, the field of gender research largely neglected female rulers in the eighteenth century, notwithstanding their remarkable frequency in this period, most of all in Russia. A relevant question is whether this double gender also manifested itself in Habsburg kingship, or to what degree this ambiguity continued to exist in eighteenth-century Europe.

Secondly, it is also unclear whether Maria Theresa's rule actually qualitatively differed from that of her male colleagues. Badinter refers to networks of women for diplomatic purposes, but Maria Theresa was not alone in that respect. Quite the contrary: several publications have demonstrated the importance of women in early modern politics and diplomacy. Formal and less formal positions at court, and the networks they generated, offered women plenty of possibilities to promote interests. [6] Maria Theresa certainly did not cause a watershed in the participation of women in government. That courtiers such as her confidante Charlotte Countess Fuchs yielded much influence is not at all unique. Personalities such as the Marquise of Pompadour certainly eclipse her. Furthermore, to her daughters that were married off at foreign courts, Maria Theresa advised obedience to their husbands. Neither did she hesitate to underline her masculine roles whenever that suited her. When Francis Stephen was crowned Emperor of the Holy Roman Empire, she refused to be crowned empress because this would force her in a subordinate female position. She defended this refusal by pointing at her coronations as 'king' of Hungary and Bohemia and stated that she did not wish to change her sex again. Badinter makes perfectly clear that femininity played a huge role in Maria Theresa's representation, but how representation and reign influenced one another remains out of sight.

Partly, these remarks can be traced back to the lack of some important recent publications in Badinter's bibliography. Nevertheless, this book sheds new light on the person of Maria Theresa, mainly because of the many previously neglected archival sources. This certainly applies to the emotional world of the empress, or at least the ways in which it was framed or perceived. The concept of the third body can help conceive new research on the importance of motherhood for ruling female 'kings'. As such, Die Macht der Frau will hopefully inspire new investigations into the nature of female rule in early modern Europe, and provoke reactions to the perceived otherness of Maria Theresa's reign.