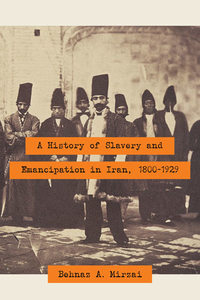 On an imaginary scale from perfect individual autonomy to complete dependence, slavery, as Eltis and Engermann define it, represents the strongest form of dependency of one human being on another. The strong asymmetry of the relationship makes the enslaved an object whose non-existence as an agent in a society has been described by Orlando Patterson as 'social death'. Behnaz Mirzai's book explicitly addresses this strongest of asymmetric dependencies straight from the title. Other forms of dependency, such as those of landlocked peasants or slaves manumitted but still dependent on the former masters, remain mentioned in passing for comparative purposes. Instead, the book choses emancipation and anti-slavery policies in Iran as its second focus. With her history of slavery and emancipation in Iran, Mirzai not only targets the scientific community, but also explicitly addresses a wider audience.

The book is a welcome addition to the existing literature in many respects. Compared to the well-researched Atlantic triangular trade, the study of slavery and trafficking systems in Europe and Asia is still far behind. However, while some regions, such as the Ottoman Empire, have already received some attention, Mirzai's monograph is the first study on slavery and emancipation in Iran in early modern times. With the period of 1800-1929, it focuses on a time in which multiple influences by various political and economic players in the region overlapped. The Qajar, later Pahlevi dynasty, British hegemonic interests, especially with regard to maritime trade, and various regional forces, be they Arab traders in the south or Circassian slave raiders in the north, were competing for influence and the implementation of their own policies in the region. In the present book, attempts are made to take a comprehensive look at this seemingly opaque network of interests and influences. The history of slavery and especially of emancipation efforts is interpreted as interdependent with, if not as a product of the larger geopolitical and economic contexts in the region.

Mirzai draws on an impressive and extremely diverse body of source material, including private accounts and letters as well as Iranian and British court records and decrees. For an outlook on the longue durée, the author can also draw on the results of her own field studies in social communities in Iran that origin from enslaved ancestors. From this rich fund, she derives countless case samples, which show interdependencies between geopolitical and economic levels and changes in social reality. With this program, the book embraces an extremely wide spectrum, encompassing political and legal decisions on the subject of slavery and emancipation, as well as individual fates of enslaved people and their descendants. In eight chapters, it first offers a historical overview of the historical background of the period in focus. The second chapter turns to the political level by looking at the connection between blurring Iranian border regions and the slave trade phenomenon. A further chapter is devoted to seaborne trade in enslaved African people, which forms a focal point among the various forms of slavery dealt with. On this example, Mirzai cannot only show the interaction of the interest groups involved, namely the Iranian government and the Arab traders. She also highlights how clearly British influence in the region was driven by hegemonic economic interests. More generally, that is, including the land-based slave trade as well as kidnappings and the status of persons born into slavery in Iran, chapters four and five consider different patterns of enslavement and general living conditions of slaves in Iran in the 19th century. These two chapters in particular, but also the later discussion of ways to emancipation (chapter eight), are strongly based on the citation of case examples from various sources. For the sake of a generally comprehensible and lively presentation, the analytical aspect takes a somewhat smaller place here. Rather frequently given intermediate conclusions, which time and again recur to the basic assumption of the monograph, are fit to keep this thesis present, but sometimes appear repetitive. However, this does not diminish the value of the book, since it opens up a rich wealth of aspects of slavery and emancipation, and touches other forms of dependency in Iran that still have to be researched. After all, an abundance of the sub-themes touched upon may serve future researchers as a welcome starting point.

Chapters six and seven are devoted to the legal perspective of emancipation and the prohibition of slavery, with chapter six focusing on the British impact and seven on intra-Iranian antislavery debates. As it becomes clear here, the influence of the different parties obviously depended on each other, so that the various interests sometimes blocked each other or produced conflicting regulations. It would have been interesting to see the gradual adoption or integration of European concepts of freedom into Iranian society and, in particular, the self-perception of enslaved persons. The examples presented from liberation requests suggest such a development, but do not explicitly address it.

All these considerations lead to the conclusion that the development of different forms of slavery, the slave trade, and ultimately emancipation and the prohibition of slavery in Iran were mainly influenced by political and economic interrelations, but less by religious or racist concepts. Mirzai partly contradicts her thesis put forward in the introduction in which she argues that Islamic scholarship has only marginally influenced the development of slavery and emancipation in Iran. In chapter seven, however, she shows the influence of Islamic norms on both the maintenance of certain forms of slavery such as those of married female slaves, and on emancipation debates, mainly relating to the influence of Sufi groups.

When Mirzai sums up that slavery and emancipation in Iran is to be regarded as a phenomenon carried and shaped by multiple influences and interests, one can confidently keep this conclusion in mind as a stimulus for further research, also on other regions. Where Mirzai's monograph cannot go into desirable depth due to its broad scope, it offers a variety of starting points for further questions and at the same time a treasure trove for scholars looking for points of departure for research on Iranian sources. By linking the history of slavery with a general view of the political and social upheavals of the time, the book also offers a thematically guided approach to Iran's history on the threshold to so-called modernity, vividly illustrated by numerous case studies, to interested readers and students.