Sebastian Conrad: What Is Global History? 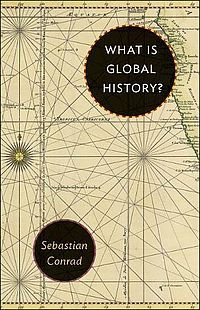 What Is Global History? is the new gold standard of its field. Sharp but balanced, comprehensive yet to the point - recall his German Colonialism - Conrad keeps the pages turning. [1] He argues that global history is a "perspective of historians" as well as, related, a "scale of the historical process". (11) He sorts existing global histories into three sets: of everything, connections, and integration. (6) He reminds us that the global does not equal the planetary, but involves many "novel geographies beyond the national". (117) None is "by definition better suited to global approaches than another," he insists (133) - and all feature disconnections as much as connections. (5) Eurocentrism is highly problematic, but other civilisationalist centrisms are intellectual dead-ends, too, and there is no denying that nineteenth-century globalization did happen "under European hegemony" (27). The global history that has risen in the last twenty years or so is refreshingly revisionist, yet it does have forerunners (17), and while it usefully transcends methodological nationalism, so do other approaches (37) - all of which need to steer clear of "methodological globalism" (135) and stay aware of their politically grounded positionality (ch. 8). Global integration is not mono-causal but multi-factored, including technology, empire, economy, culture, and biology. (103) The "structured ... transformations" underpinning it (91) do not preclude individual agency. (108) And it has not been steadily tightening but seen ups and downs (101); sometimes one field becomes more globalized just when another becomes less so. (109)

Although, or perhaps because, Conrad is so comprehensive, his penchant for balance can be a bit too much of a good thing. Regarding "connections and/versus structures," his balancing of positions creates a tension that he recognizes but does not and perhaps cannot solve. He appreciates global historians' love for connections, and expands on four exemplary approaches: transnational regions, the paradigm of following, networks, and global micro-histories. (118-32) But he is critical, too. Making a structuralist point - one rooted in the German historische sozialwissenschaftliche tradition? - he calls for "special attention to the notion of global integration, or structured transformations on a global level". (62) "[C]onnections alone are not sufficient to explain the originality of the [global] approach;" they "need to be embedded in processes of structured transformation" (64) and are "preceded by [global] conditions". (69) While non-embedded global connections exist, they remain "accidental and ephemeral ... to the social make-up of a society". (68) Despite these assertions, Conrad is not a purist. As seen, he underlines individuals' agency in history. Related, microhistory is not a red flag to him; he is not Hans-Ulrich Wehler, a doyen of historische Sozialwissenschaft, and we are not in the combative 1980s. And he actually sees "no inbuilt opposition between connections and structure. On the contrary," he adds, "as structures are themselves the product of interactions and exchange, they rely on connectivity". (102) This point makes sense. [2] Total sense, indeed - such that it does not simply nuance but, in my eyes, nix the connections/structures distinction. I do not think that this is a problem for Conrad's book, though. Rather, it's the inevitable result of him successfully reflecting and reflecting on his field. That issue is, however, something global historians should continue to discuss - doubly because it concerns their "non-global" colleagues, too. [3]

This is the case also for Conrad's argument that global history, being both "an object of study and a particular way of looking at history ... resembles other fields/approaches in the discipline, such as social history and gender history". (11) I agree; and would add two points. First, in principle, any field/approach is both topic and optic. Think not only of social and gender but also of race, religion, urban, rural, political, economic, social, cultural, environmental, intellectual, local, nation-state, and regional histories, among others. In this sense, global history is unexceptional. In another sense, however, it is rather exceptional. Like local, nation-state, and regional histories but unlike the other histories just mentioned, it does not have a (however broadly defined) concrete content such as politics or religion; hence, by the way, subfields like global social or intellectual history. [4] But neither is it a (however ambiguously) circumscribed space, like a locality, a bordered nation-state, or a sub- or multi-national region like Catalonia or Southeast Asia; hence, historians call fundamentally different spaces global. Of all historical fields/approaches, the global may well be the least distinct, most multiform one.

This selfsame fact shows also in Conrad's argument that the global is a scale of the historical process. A scale, he reminds us, is not a "unit of analysis" (136). Thus, "the global ... is not a distinct sphere" - or space - "exterior to national/local cases" but "a scale that can be referenced even when we look at individual lives and small spaces" (140). I agree; yet also see a double challenge. First, does - indeed, can - the global scale have a distinct content, however vaguely defined? The answer is unclear. "We can," Conrad states, "study a particular location ... and ask questions concerning ethnic and class differences, gender relationships, and local cultural expressions; we can also, however, reference the global scale and ask big questions". (136) "Big" is indistinct; vice versa, local manifestations of ethnicity, class, gender, and culture likely have supra-local connections or at least parallels. Second, scales are not "given ... [but] constituted through social activity and everyday practice. ... 'What is often referred to as the local,' writes social scientist Roland Robertson, 'is essentially included in the global'". (136f.) In result, we face the logical conundrum that the global scale used to analyze a big dimension of a, say, local unit does by itself contain "the local."

It's Conrad's merit to have drawn our attention to this and other puzzles and aspects of global history with perspicacity - and with a cool eye for long-term trends rather than a missionary's swagger. While global history is in fashion, its very success, Conrad concludes his tour de force, may make it "recede into the background ... . Historians will resort to new geographies ... [and] follow specific interactions and patterns of exchange, rather than taking any one scale as their point of departure". (235) [5]

[2] This point could be buttressed by theoretical work on structure/agency. Classics include Anthony Giddens: The Constitution of Society: Outline of the Theory of Structuration, Cambridge 1984; William Sewell: A Theory of Structure: Duality, Agency, and Transformation, in: American Journal of Sociology 98:1 (1992), 1-29; and, different but related, Pierre Bourdieu's work on habitus, e.g. in: Le sens pratique, Paris 1980 [English: 1992]).

[5] Geographers and social scientists offer helpful tools. For rescaling, see Neil Brenner: New State Spaces: Urban Governance and the Rescaling of Statehood, Oxford 2004, 10; for scalar fixes, see N. Smith: Remaking scale: competition and cooperation in prenational and postnational Europe, in: Competitive European Peripheries, ed. by H. Eskelinen / F. Snickars, Berlin 1995, 59-74. See also my development of the heuristic concept of transpatialization, using the case of the socio-spatial making of the modern Middle East as part of the world at large, in: Cyrus Schayegh: The Middle East and the Making of the Modern World, Cambridge, Mass. 2017.