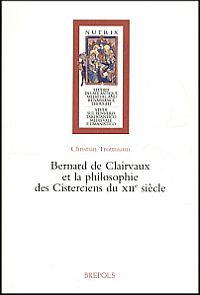 As the title indicates, this book seeks to reclaim for Bernard of Clairvaux the designation philosopher and to recast the Cistercian twelfth century in terms of a school of philosophy that developed around its master, Abbot Bernard. On one hand, to speak of the Cistercian phenomenon in terms of philosophy accords with the self-understanding of the figures studied here, who seldom used the terms theology and theologian, and who gladly saw themselves as professing a Christian philosophy. On the other hand, from the standpoint of recent scholarship, to speak of a Cistercian school of philosophy may sound jarring.

The author has deliberately chosen an approach that will strike most readers as countercurrent. He attributes this predicable reaction to a kind of cultural conditioning inherited from twentieth-century historiography. He depicts this historical perspective as overemphasizing the thirteenth century as the turning point in the development of philosophy and as reducing the scope of philosophical inquiry to metaphysical considerations of being. His goal is to regain a more historically accurate view of the development of philosophy with its strong ethical dimension and its absorption of Christian values. Bernard, from this viewpoint, is the apex of the long tradition of Christian Socratism as inherited through Origen and Augustine. He reminds readers that followers of Bernard like Helinand of Froidmont saw the abbot of Clairvaux in this light: "Read also the blessed Bernard's beautiful book De consideratione addressed to Pope Eugene. From its exquisite style and its nearly super-human statements you will realize not only what man is, but also what God is. You will be able to understand that the author of this book was wiser than Apollo, more eloquent than Demosthenes, subtler than Aristotle, more ethical than Socrates, and more discerning than Plato" (De cognitione sui, 10; PL 212, col. 731; cited in Latin on p. 490-491, n. 369, and again in French on p. 630).

The presentation of Bernard's thought is structured around Bernard's own key insight as expressed in his early work The Steps of Humility and Pride: the way to God begins with humble self-knowledge, progresses through compassion (i.e., the recognition of one's own misery in others, which leads to charity), and reaches completion in loving contemplation of God. By following this three-step structure of humility, charity, and contemplation, the author stays close to Bernard's own thought and avoids the danger of imposing an artificial synthesis from without. Because progress on this pathway depends on the pull of eternal values and is only complete beyond this life, the author characterizes Bernard's philosophy as eschatological Socratism.

The second part of the book traces the development of a school around Bernard's foundational insights. The first group of authors considered is predictable: Aelred of Rievaulx, Guerric of Igny, and Geoffrey of Auxerre. A second group is gathered under the designation "the most philosophical of the twelfth-century Cistercians," namely, Isaac of Stella, Garnerius of Rochefort, and Helinand of Froidmont. One of the merits of this book is that lesser-known figures like Garnerius are presented within the context of the history of philosophy in general and as part of the Cistercian school in particular. At times, however, the approach becomes a tour de force, since each Cistercian author is at some point paired with one or the other ancient philosopher. A final group of authors consists of three "satellites," namely William of Saint-Thierry, Alan of Lille, and Joachim of Fiore. This perspective on the key Cistercian authors of the twelfth century is refreshing. William, who is often presented alongside Bernard, was in fact a late arrival, who remained somewhat marginal from his newly found Cistercian contemporaries. Moreover, even divergent figures like Joachim provide helpful contrast in characterizing the so-called Cistercian school.

The author's impressive range of knowledge is in evidence throughout this work. Rarely are the Cistercians of the twelfth century presented within such a wide-ranging context. Whether readers are convinced or not about the designations philosophy and philosophical school in connection with these monastic authors, this book provides a sympathetic and in-depth presentation of them in both their individuality and in their interdependence.

Although he makes no such claim, Trottmann's book is a sort of twenty-first-century answer to Gilson's The Mystical Theology of Saint Bernard. Not only does it present a faithful synthesis of Bernard's thought, but it also situates Bernard in relation to other key Cistercians of the twelfth century. Unlike Gilson, however, Trottmann is prolix in the extreme (over 600 pages), which reduces the chances of this book being widely read and translated. On one hand, the prolixity is part of the method: the reader is immersed in the history that underlies and follows the thought of Bernard and his companions. On the other hand, the work would benefit from less repetition and a reduction of the tour de force effect mentioned earlier. Despite the length of the book, a detailed table of contents, an extensive bibliography, and indexes make it easy to consult. Trottmann's thoughtful work will be an important point of reference for many years to come.