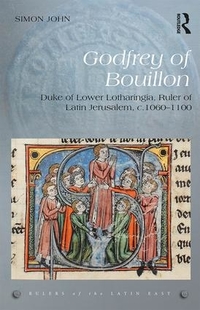 In this new biography of Duke Godfrey of Bouillon, probably the most famous of First Crusade leaders, Simon John seeks to locate Godfrey "the crusader" firmly in the context of his earlier rule in Lotharingia and to combine the two aspects of his life in order to craft a holistic account of his rulership in the West and the East. Although there has been no shortage of academic studies of the First Crusade, there have been surprisingly few monograph studies devoted to the individual "princes" who led the expedition, and those which we do possess are starting to show their age. Despite Godfrey's totemic role in medieval secular and ecclesiastical culture as the first Latin ruler of Jerusalem and his assumption into the circle of the "Nine Worthies" alongside Charlemagne, Hector, Alexander the Great, and Judas Maccabeus, among others, the most recent monograph dedicated to Godfrey was published in 1985 by Pierre Aubé, and, before that, the last full-length study available to Anglophone readers was John C. Andressohn's 1947 work. [1]

Simon John's book, then, which takes account of the latest fruits of modern crusade scholarship, especially landmark studies by John France, Alan V. Murray and Susan B. Edgington, is a welcome addition to the historiography of the crusades. The book will be especially useful in university teaching since it casts a broad net over scholarship not only on the crusades but also on non-royal rulership and does an excellent job of synthesising the latest French and German scholarship and making it accessible to an Anglophone audience. Based upon a comprehensive and wide-ranging reading of the primary sources and secondary literature, John's book also contains a treasure-trove of information for researchers in the notes which makes it an excellent starting point for new research into the First Crusade (although it is a pity that Routledge continues to publish academic studies with endnotes rather than footnotes, and that this is also the last monograph in the series "Rulers of the Latin East" to be published with a cover image and its distinct series cover).

John's book falls naturally into two main parts: Godfrey's life and ancestry in Europe, and his experience on the First Crusade and his elevation as ruler of Jerusalem. As the author emphasises in the introduction, we cannot seek to understand the latter aspect of Godfrey's life without taking proper account of the former. The book therefore begins with a narration of Godfrey's ancestry and parentage, which provides the context for understanding why Godfrey was inclined to respond positively to the crusade call. John writes in a refreshingly clear style, and does a very good job of making the tangled politics of eleventh-century Lotharingia and the empire comprehensible - something which will be particularly welcomed by students and those approaching this difficult topic for the first time. Ranging over Lotharingia and its place in the empire, Godfrey's maternal ancestry, the careers of his predecessors Godfrey the Bearded and Godfrey the Hunchback, and Godfrey's parents Eustace II and Ida of Boulogne, John establishes the political context into which Godfrey was born. Godfrey came from a family with close links to the reform papacy and was closely enmeshed in both imperial and Norman politics, occupying a territory that straddled both spheres of influence.

In Chapter 2, John turns to address Godfrey's early life, from his birth in c. 1060 through his career as duke of Lower Lotharingia between 1087 and 1095, exploring his early years, his succession to the office of duke of Lower Lotharingia in 1076, and his political and military exploits. John makes a convincing case in this chapter that despite other scholars' inclination to portray the duke as a close adherent of Henry IV during this period the evidence linking the two is problematic, and he draws attention to episodes when Godfrey entered into opposition against Henry's surrogates in Lotharingia. John's skills as a historian shine brightly in this chapter, especially in his investigation of Godfrey of Bouillon's selection as the successor of Godfrey the Hunchback, which displays a careful and precise evaluation of the available evidence.

Having established firmly the Lotharingian context of Godfrey's rule and the ancestral and political forces that shaped his life, in Chapter 3, John moves on to analyse the duke's response to Pope Urban II's call for the First Crusade in 1095 and his subsequent preparations to depart for the East. Building upon the preceding two chapters, the author argues that the international epistolary networks of Godfrey's family and its support for the papacy and its reform agenda, as well its close relations with the monks of St Hubert, all probably influenced his decision to take the cross, at a time when crusaders from imperial lands were outnumbered by their "French" and Norman contemporaries. It is also argued that Godfrey's decision to join the crusade may have been an attempt to break away from his relatively inauspicious and constrained attempts to exercise power in his homelands. Intriguingly, John points to the fact that Godfrey was known by his sobriquet 'of Bouillon' as evidence suggestive of a more restricted sphere of influence than his predecessors Godfrey the Bearded and Godfrey the Hunchback enjoyed, who exercised power throughout Lotharingia and beyond.

Reaching Chapter 4 and the course of the First Crusade, we are on well-trodden territory, though John is able to draw out interesting aspects of Godfrey's performance on the crusade through a careful reading of the chronicle sources. John traces the importance of Godfrey's mutually supportive relationship with his brothers on the crusade, Eustace and Baldwin, and how the three brothers worked to support each other's interests. Another notable observation is how, despite Godfrey's subsequent fame, he played a relatively low-key role during much of the course of the expedition (probably laid low by serious illness for some of this time) and that it was only at the very end of the crusade that the duke seized a chance to assume a premier position among the crusade leaders.

In Chapter 5, John examines Godfrey's role as ruler of Jerusalem between 1099 and 1100, discussing his appointment, rule, death and the succession of his brother, who reigned as King Baldwin I. This calls John to weigh in on the long-running debate over the exact form of Godfrey's rulership and whether he ruled as king or merely assumed the mantle of the Holy City's defender or aduocatus (as the Laodicea letter of September 1099 states in its salutatio clause). John sides with those scholars who argue that Godfrey shunned the title of king and then explores why he did not assume a royal title and the nature of his rule in great detail.

Given that the book is written as a biography, analysis and argumentation are often subtle, and the chapters finish without a summative statement of conclusions. The principal arguments of the book are, however, stated explicitly and convincingly in the conclusion and readers may wish to consult the relevant sections of the conclusion as they proceed through the chapters.

The book closes with a lengthy epilogue in which John carefully traces the formation of Godfrey's legendary posthumous identity as the foremost of the heroes of the First Crusade in the twelfth and thirteenth centuries and his assumption into the ranks of the Nine Worthies. The author guides the reader confidently through the development of Godfrey's literary reputation and the contemporary contexts which helped to shape his historical identity and its deployment by medieval commentators. This epilogue - which is a compressed version of a large part of the doctoral thesis on which the present monograph is based - is a fascinating contribution to the medieval historiography of the crusades and the formation of the identity of its most famous heroes; it is very much hoped that John will return to develop this research in future work.

In sum, this new biography of Godfrey will surely become the standard work on Godfrey in any language (indeed, it has already been translated into Polish, something very rare for an author's first academic monograph and which testifies to the wide appeal of Godfrey's life). It is sure to make a considerable impact on the scholarship on the First Crusade and one hopes that it will also find an enthusiastic audience among the general public as a lower-priced e-book; hopefully, in time, it will also appear in paperback.